Here is a drawing of an old picture. Your task is to answer all 8 questions correctly AND give a good reasoning for it 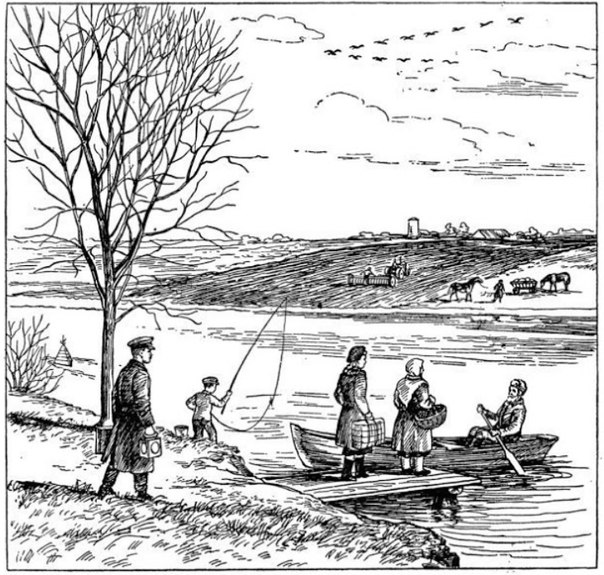 Took a double take, but didn't notice the shadows first, which suggest morning because they are walking eastward.

2.Is it early spring or a late fall(autumn)?

3.Is this river navigable?

Yes, else there wouldn't be a reason to place a buoy (atleast I think it's a buoy, could be a tide-gauge).

4.Which direction does the river flow? (North, East, South or West?)

It flows South, you can determine the direction with the "buoy" and with the fact that the bids fly north.

5.Is the river deep or shallow at the side where the boat is?

Deep, the fishing line is too long for shallow water.

6.Is there a bridge across the river somewhere nearby?

Probably not, crossing a bridge is usually free, using a ferry isn't.

7.How far is the railroad from here?

Probably on walking distance from the boat, the people seem to be travelling to the countryside so it seems likely they just came from a train station.

8.Do birds fly North or South?

North, because it's spring.

Morning (shadows fall on the West)

Early Spring (harrow on the field)

South (determined by the passage around the displacer water.)

No bridge (the man in the boat - the ferryman)

Close (a man with a lantern rail)

This answer has been copied and edited out of the question, and is not produced by me. (It is thus Community Wiki, which does not earn reputation.)

If you look at the picture, you will see that people are sowing and not harvesting. Sowing can be done either in the fall(autumn) or early spring. Fall sowing happens when trees still have leaves, but on the picture the trees are naked, so it's early spring.

Because it's early spring, birds(cranes) fly from South to the North. Knowing that birds fly to the North and looking at the buoy we can say that this river is flowing South.

Buoys are only placed on the navigable rivers to show danger areas and let ships navigate easier/safer.

Shadow of the tree shows that the Sun is somewhere South-East. During the spring, that position of the Sun happens normally around 8:00-10:00.

The guy with the lantern is the railroad conductor, so he probably lives(or works) somewhere nearby.

The pier and the ferry show that there is no bridge nearby, otherwise people would just walk on the bridge. Similarly, the fishing boy has set his float quite far from the hooks, so we can assume that river there is fairly deep. If it would be shallow, the boy would put his float much closer to the hooks, so that hooks are not on the ground in the water.

It's hard to tell in a lot of cases. I notice there are other answers, and though some of my answers match theirs, I disagree on some of them. Here are the things that stand out to me:

The location must be somewhere temperate as we see a tree bare of leaves, so let's assume it's somewhere like Yorkshire.

What time of day is it?

It must be about noon. Yorkshire is about 54 degrees North, so the maximum height of the sun at noon near the equinox is about 36 degrees, and the shadows seem to be less than the height of the objects casting them, so the sun must be very high in the sky for early Spring or late Autumn.

Is it early spring or a late fall(autumn)?

Spring, because the farming activity looks like preparation of the ground rather than harvesting. However, whatever is being done seems to leave no mark, since the farmer and tractor are in the middle of the field, yet neither left nor right is there a visible difference showing the part already worked on.

Is this river navigable?

Obviously. There's a boat in it. But navigable is a relative term. It's very unlikely to be navigable for an aircraft carrier.

Which direction does the river flow? (North, East, South or West?)

Since it's close to noon, the sun must be to the South, and the river is flowing left to right, so it must flow South.

Is the river deep or shallow at the side where the boat is?

Compared to what? It's probably about waist deep. Where rivers are straight they tend to slope down from the bank. The presence of the jetty proves that it's not deep enough to get the boat right up to the side. It looks like there's a float on the boy's fishing line, so within the reach of his ability to cast, the water must get deep enough that the hook is still above the bottom - probably over 3m. Note that the total length of a fishing line on a river is irrelevant, as it is often used to cast futher away from the bank rather than to get deeper.

Is there a bridge across the river somewhere nearby?

It's impossible to tell. The people using the boat suggest that they cannot use a bridge, but that may be be because they're going to an island in the river whereas the bridge is further downstream and only goes to the other side. Also, there could be a railway bridge which is not open to foot traffic.

How far is the railroad from here?

It's very difficult to tell. The man on the left might be a railway worker, but even if he is, he's carrying quite a large case in his left hand, so he could be travelling some considerable distance from it. Either that or he has an extraordinarily large lunchbox.

Do birds fly North or South?

While I agree with the others on most answers I have a different oppinion on Number 5:

I think it is shallow. Why? Because it looks like the Boy is standing in the river. Also there is a buoy near the first third of the river which maybe indicates where the river gets deep. To the argument with the long fishing line: Is is quite common to use a long line while fishing in a river, so that the line can flow in the water.

First of all I want to point out that IMO the shadows and the river make something around a 45 degrees angle, just for your consideration.

Since all people look caucasian and to be wearing late 19th/early 20th Western attires, I'm saying it is north hemisphere.

Birds look to be flying in about the same direction range (really hard to tell) shadows are cast to. This happens in Spring in both hemispheres and while they are flying North in North hemisphere.

* Taking a look to the other answers I see references to landfarmers sowing, not harvesting, which is even better reasoning for Spring, but wasn't my first thought I'll admit.

It's really hard to make a perfect appreciation, but IMO shadows are cast towards NW or so.

So I'll say morning but not too soon, since shadows are already well defined.

With the right craft, any river is navigable.

Aside from that, the boat and the dock strongly suggest the river is navigated frequently.

Q4: Which direction does the river flow?

From North to South. You can tell by the trails on the water plus achieved knowledge from previous Qs.

Q5: Is the river deep or shallow at the side where the boat is?

I think it's deeper at this side. The riverside ends more vertically here and looks smoother on the other side (also hard to tell).

Q6: Are there bridges nearby?

At least the people in the forefront doesn't look to think so. They will probably rather cross the bridge since it's faster. If the boat has already departed when you reach the river you'll have to wait for it to deliver the passengers, return, and then carry you to the other side. One lone old guy rowing won't get a very high peak speed I bet.

* Also, other answers suggest the ferry costs money, which adds up for the bridge to be the first option if available.

Q7: How far is the railroad from here?

Far enough to not be in the drawing.
Close enough to be reached by walking by a railroad worker with no more equipment or luggage than a lantern and a rather thin suitcase.

That's the better answer I can give.

Going to answer in the order I figured them out instead of order presented:

Spring. They are sowing not planting

North. Because it is Spring

Morning. Birds are flying North and shadows are going West, so sun must be in east.

South, based on ripples around buoy.

Yes, because there is a buoy

Shallow, the buoy marks the shallow/deep line for larger boats.

No, otherwise people would be using it.

The scenery suggests that it is not close to the equator, because of the tree with no leaves which suggests sufficient temperature difference between seasons. This means that the sun will not rise extremely high into the sky and thus will always cast some shadows. The shadows in the picture are relatively short, thus it would have to be close to 12:00.

The tree has lost its leaves, however there are no visible leaves on the ground. This suggests that sufficient time has past since the tree lost its leaves, such that the leaves might been blown away by the wind or washed away by rain. Thus it would have to be early spring. The farmers seem to be plowing the fields, which might also give some clues, however I do not know enough about farming, but after a few searches it seems that fields can be plowed in both spring and autumn.

The buoy in the left of the picture most likely would function as a lateral marker, which marks the edge of a save water channel, which suggests that boats will navigate the river regularly for transport.

The buoy causes waves, which travel to the right, so the river is flowing to the right. Also the small boat seems to be docking, which is easier when the front of the boat is turned into the flow of the river. Given that it is roughly midday, then the shadows would either point north or south, depending on the hemisphere this picture was taken. The people in the picture seem European, so it would be the northern hemisphere. Thus the river is flowing towards the west.

The buoy is relatively close to the side of the river, so the river would have to be deep enough for large ships. Depending on your definition of deep and shallow, I would say the river near the boat would be deep.

The small boat is most likely not meant for transport along the river, but for transport across the river as a ferry. This suggests that there are no nearby other means of getting across, thus there is no bridge nearby.

Answer 7:
I do not know the answer to this question.

Since I assume that this is the northern hemisphere, then the birds are flying in V formation towards the north.

2
The cage - a logic puzzle
13
Picture Perfect
15
Enlightened, Part I: Finding the Temple
50
Find the treasure before Dargloc does
11
Another picture puzzle _________
11
My grandfather left me something odd in his will
19
Logic puzzle: Driving around the United States