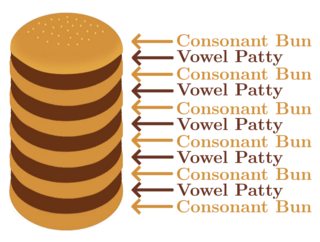 Here is the menu's description of the new burger:

Can you identify what type this burger is from the description on the menu?

We hope you all will enjoy our new burger!

I think the answer may be

PUL, currency in Afghanistan and historically in parts of Russia.

ZED, the 26th letter of the alphabet.

something that is popularised is often said to go VIRAL. (Perhaps a bad word to use these days ...)

Could the burger perhaps be

remove - "REM" being its first three letters;
money - is lusted after by the mafia/"MOB";
god - "BIL" is apparently the goddess of the waning moon in Norse mythology;
rose - "LIZ" Rose is a famous musician (I find this to be a stretch in my answer);
no 26 - "ZED" is the British pronunciation of the letter Z, the 26th letter in the English alphabet

If so, perhaps the world needs to be this second Penta-decker Vowelburger™ as prudent recourse to the first one.

Not the answer you're looking for? Browse other questions tagged word wordplay letters or ask your own question.