Seeing as the pilot episode was a major success, with an outstanding and correct response from one of our viewers, it’s time for Episode 2. Remember, we show puzzles with kings and pawns only! Those pesky pieces get too much attention-the pawns need some love as well and the kings a chance to engage in combat at last. Here is challenge number two!

It how few moves can White compel Black to mate White, i.e. enforce a selfmate? 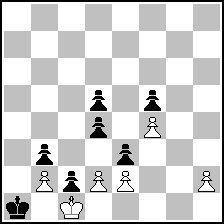 The last episode was difficult, with a few twists and turns, but this selfmate left little doubt: the answer is 18 moves.

It's clear that we must manipulate Black's pawn structure somehow, because there's no way a mate can come out of the current structure. The fact that such a manipulation must be forced, i.e. Black's only legal move, simplifies things. It also helps that the only way to manipulate the structure is to get a Black pawn to capture something.

My first instinct is to lock everything down with 1. d3 (which prunes our considerations to only endless ...Ka1-a2 shuffling), promote to a knight on h8 with the h-pawn, and then control the a2 square whilst coercing Black to capture. Controlling the a2 square at the right time is critical, because it's the only way we can force Black to do something; else Black's MO is to shuffle a1-a2. The last step must be executed in order to force black pawn to capture the newly minted knight, thereby changing the structure. Thus something like: 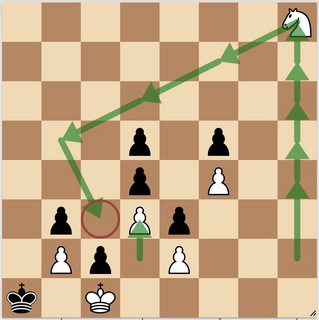 However, in the above scenario, even teleporting the White knight to c3 does nothing - ...dxc3 is forced, but Black is thereafter not forced to take ...cxb2# and can instead resume dilly-dallying with ...Ka1-a2. Thus it's clear we must somehow have, in hand, yet another piece to control the all-important a2.

Enter a second promotion, methinks. I believe the way to do this is to use the first-promoted knight to capture the d5-pawn en route to c3, play Nc3 forcing dxc3, run the White d-pawn up the board whilst Black shuffles a1-a2, promote on d8 to a second knight, then install the newest knight on b4, controlling a2 again, and quite literally forcing ...cxb2# to be Black's only legal move. For example, stage 1 is topple d5 on the way to c3: 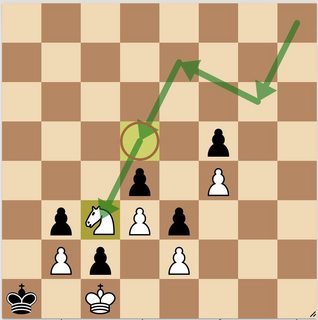 And then after Black is forced to capture with ...dxc3, we ignore the pawn, instead running the d-pawn up the board to make a second knight (note that Black will avoid ...cxb2# and instead shuffle a1-a2 while we do this): 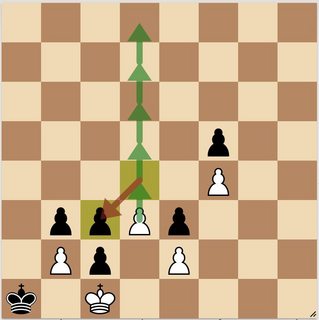 And then get that knight to b4 (see bottom diagram).

I must note that along both promotions, care must be taken to time it right - knights are notorious for not being able to "lose" a move, i.e. they can reach any given square in either an odd or even number of moves, but not both. This is done easily enough by advancing the h-pawn only one square instead of two on move 2. Thus, in practice: 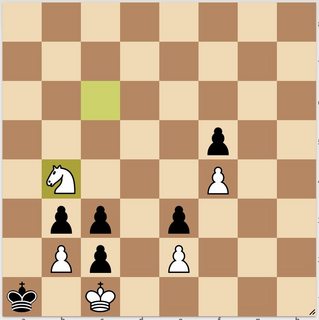 Not the answer you're looking for? Browse other questions tagged no-computers chess optimization selfmate or ask your own question.

5
Footmen And Friends #1: A Long Ways Away

9
Place three Knights, three Bishops and three Rooks on this board snippet
20
Square Spin #1: Sun and Moon
2
In and out, and back in again
6
And another one bites the dust
5
Footmen And Friends #1: A Long Ways Away
2
Footmen And Friends #3: Eviction
5
Switching Black and White
3
Footmen and Friends #4: Double Iced
12
Three white queens, two white knights, and one rook on a chess board
9
Interchanging knights and rooks… again!