No trap in this one

This visual puzzle resolves to a number. 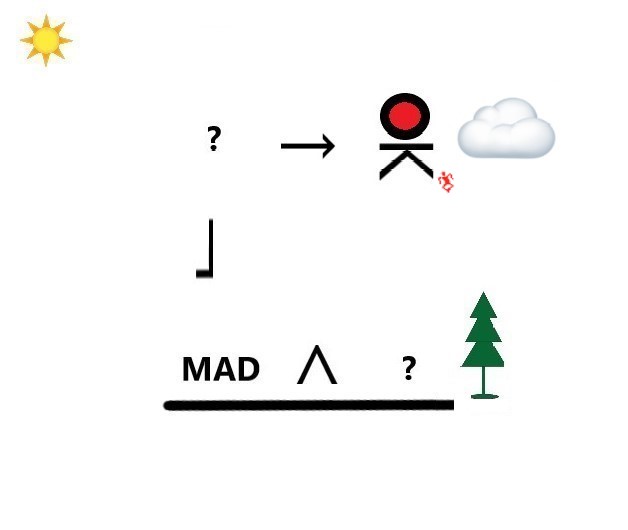 The title is stuffed with hints:) The puzzle is actually cluing a relatively well known and culture related thing in an unorthodox but logical (??) way. One of its components provides the opportunity for self-checking.

Logically, the propositions are forced to cancel each other, so they form a "nonsense biconditional statement", which means, the conclusion will be nonsense, too. Metaphorically it would make a bit more sense, it means: from certain real world situations, sometimes it is impossible to ...

Sun, conifer and cloud are decorations and they show basic directions, but they have no more meaning in relation to the content.

So, I hinted "ask", and an answerer said "OK", "mad", and he also guessed an "aeroplane" (apparently there is no aeroplane, but this guess is very sensible)...and the things left are signs borrowed from formal logic.

Just let's take a look at a random line. The necessary hints have been given already; So, for example, it looks like: "'Ask' 'implies' 'OK'"

Asking "Is it okay ("OK", rotated 90 degrees right) to jump from Aeroplane (Arrow-plane)?" else (conditional, branchpoint) (if it is not safe) you will madly (nonsensically) CRASH (Cross) into conifer.

So the ? at ground will be

Cross (X) . The festival is X-mass

and the number is

XV (15) if we see it together with Caret, together upside down

Not the answer you're looking for? Browse other questions tagged knowledge visual lateral-thinking or ask your own question.

12
This one should be popular!
6
Sort the pictures and guess the next one
31
What movie is this?
9
This one came to me out of nowhere
7
This one might be a toughie
10
Find this cartoon
21
Setting up the trap