The latest thrilling instalment! Warning: it's pretty much impossible to construct a square of this size without using some obscure words that you might have to look up.

“Where is the formula?” the man they called Gilgamesh demanded, as I struggled vainly against my bonds. “I don't want to hurt you. I am not a cruel man.”

“Tell that to the American civilians who died in the bio-attacks along the Eastern ________!” I shouted defiantly.

I wanted to tell the truth, but if he knew for sure that I really was a businessman, maybe he'd just kill me. “And I thought you were an investor, not an Islamist terrorist!”

“Me? I abandoned my faith long ago, and was cast out as an ________. It is money that makes the world go around. The Greeks and the Turks, they say their religions make them different, but they are all the same. I learned that as a smuggler, plying my trade through the Dardanelles and the Strait of ________.”

“You? Working for a living?”

“Do you think I got this rich by lounging around and eating stuffed ________ like a decadent towel-clad Frenchman? I worked hard for my money, and I will use it as I please.”

“What are you seeking?”

“I must say, you have an impressive vocabulary,” I said, trying to build some rapport.

“Oh, I am a man of many talents. I can master whatever I set my mind to, whether it be tuning and ________ an outboard motor for optimum performance, tasting wine, or riding a horse. Would you believe I once thought to compete in a ________ event at the World Equestrian Games?”

I tried to imagine it, but I could not.

I believe this is the answer : 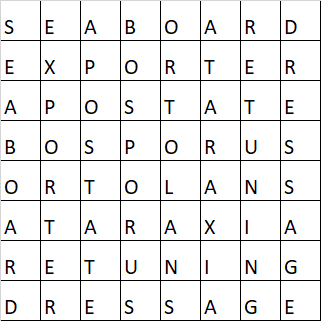 1. Easter Seaboard
2. Humble Exporter fits the bill
3. Apostate - a person who forsakes his religion
4. Bosporos - The strait between Greece and Turkey
5. The birds Ortolans are eaten in the series Billion
6. Ataraxia is Greek for "undisturbed" or "untroubled"
7. Tuning and retuning
8. Dressage is one of the official equestrian events

The strait of Bosporus was the simplest to find. Then, there are only a few equestrian events, and only Dressage matched. Then followed Apostate which was fairly simple with the other two in place. Ataraxia was found using a synonym list. Ortolans required an online crossword helper, since I've never heard of the word and couldn't think of anything that matched. The rest was not that hard, since almost all letters were filled in. Exporter was the last word I found, since it could also have been Importer.

It all seems simple in hindsight, but it took me quite some time. Overall a very nice puzzle.