The cryptic crosswords are actually new for me and I even struggled to solve one as English is not my first language. So I decided to look for a cryptic crossword in my language, Indonesian... And I found... nothing... not even a single cryptic clue in Indonesian language is available... ><

So, here goes nothing... This is my attempt to create the first-ever cryptic crossword in Indonesian language a.k.a Teka-Teki Silang (TTS) Kriptik Bahasa Indonesia! Of course, your feedback and opinions would be highly appreciated! ^^ 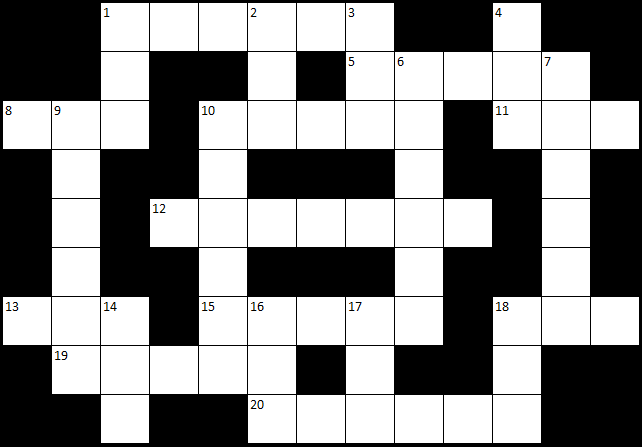 In the chatroom created by North, he and I have been attacking this, and we've finally done it. 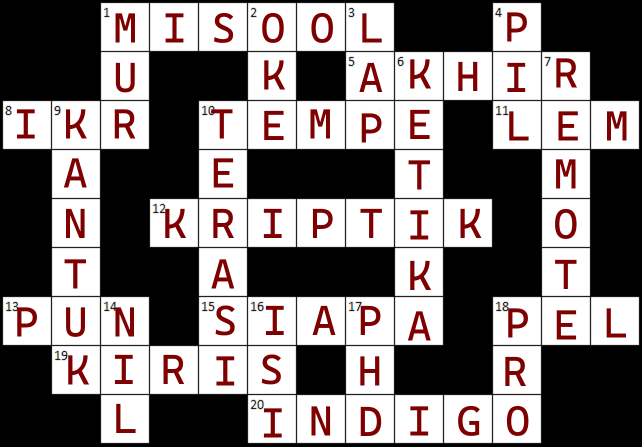 For many of these there are more verbose, but also more disorganized, explanations in the chatroom linked above. (In particular, there are lots of Bahasa Indonesia -> English translations there.)

Thanks to athin for clarifying in comments some bits of wordplay that we missed.

Solving technique, if you can call it that:

Pick a clue. Translate it with Google Translate. Translate individual words and, where appropriate, phrases with Google Translate. Think of possible ways to parse as cryptic clues. Figure out what things we therefore need words for in Bahasa Indonesia, and get 'em with Google Translate again. Repeat until blood starts to pour from every orifice and/or you solve the clue. Repeat for other clues. (You can find some more concrete thinking-out-loud in the chatroom transcript.) In extreme cases, find Indonesian word lists like the ones here and search for words matching the patterns in the grid. We haven't done this much because it's (1) a bit cheaty and (2) a lot boring. For the last couple, I made use of a larger wordlist in the same GitHub repository. 18a: looked for words of form -E- and looked them all up in GT, looked for 6-letter words containing TOM, and saw that PEL and TOMPEL were good, with PEL even having the right sort of meaning. Google Translate didn't know TOMPEL (which is why we didn't find it earlier) but the Indonesian Wiktionary did. (Top tip: applying Google Translate to foreign-language Wiktionary pages seems to be quite effective.) With 18a out of the way, 18d was P-O and there weren't a lot of options; again Wiktionary was helpful, actually using the word "agree" to describe PRO (as opposed to KONTRA, when describing votes). Then another search of the bigger wordlist turned up PROTES and I felt very stupid for not thinking of that earlier. (Of course it means "protest", and a TES is a test or exam.)

That was a lot of fun, but also a lot of work.

Not the answer you're looking for? Browse other questions tagged language cryptic-crosswords or ask your own question.