A Wife to Honor - The waltz of the electrons

Here's a noodle-scratcher (hopefully) for you math puzzlers.

Each source is exactly $1$ unit below the source above it, and separated from the drain to its right by the length of $n$ edges. 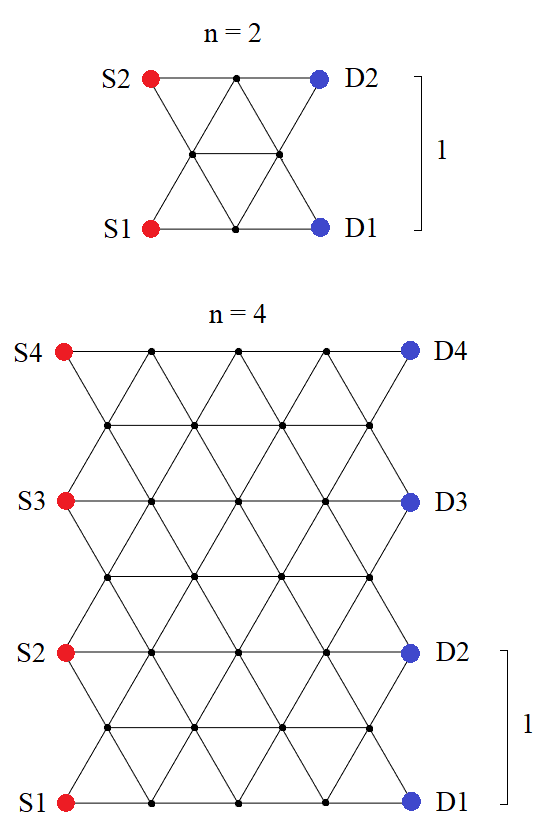 On the grid are $n$ electrons, named $e_1\ldots e_n$, with $e_1$ initially at S1, $e_2$ at S2, etc. They can rest (stay where they are) for any length of time, or move to adjacent nodes along edges. Being nice, orderly electrons, they move independently, only one at a time, between rests.

There are some simple rules to follow, even for electrons:

Due to legitimate quantum mechanicish reasons, there are also two more complicated rules to follow.

The additional rules are:

Note that these rules apply only to electrons at rest and not to any intermediary edge traversals.

Like all self-respecting charge carriers, the goal of each electron is to reach a drain node. It doesn't matter which electron reaches which drain, so long as all $n$ electrons occupy all $n$ drains simultaneously.

It turns out this goal is always possible, even with the dancing restrictions.

This is your objective. Prove that for any $n$, there is always a way for the electrons to collectively reach the drains by waltzing around the grid.

(Bonus props for determining the significance of the puzzle title.)

Covalence is an equivalence relation. The Law of cosines may prove useful in determining its equivalence classes.

In my strategy, the electrons will now rest only on points of the row they are originally on. So electron $e_k$ will move to drain $D_k$.

With the exception of $e_1$, all electrons can make moves that bring them exactly one or two edges backward or forward on the grid. In these moves, the electrons will only use points one row above or below their row. To be able to move electron $e_1$ one step forward, all other electrons cannot be at their starting position nor at one point in front of it. So all others have to be two positions forward. But in order to move $e_2$ two positions forward, the other electrons have to be one position forward, etc. This reminds of the restrictions in the game 'Tower of Hanoi'.

Here is, how this plays out. Dots represent positions on the starting rows of the electrons. Positions, where the difference of column number is divisible by 3, are covalent. Numbers indicate electrons.

14
Does this grid puzzle with a symmetry-breaking condition have a solution?
16
Ernie and the Artificial Emmental
11
The mathematical meta magician
10
For the honor of Hufflepuff
20
The frog concerto
14
The Stubborn Tenant
8
Elementary vowel equations
13
Coin removal problem
8
Stacking pancakes for your wife
8
Existence of index-uniform Hashi puzzles