Four friends (Al, Gary, Mike, & Roger) each have a favorite TV show. Oddly enough, while the four are close friends, their interest in TV shows is so different that none of the friends has the same favorite. In fact, each favorite show (Explorer, FBI, Family Tides, & Z-Files) airs on a different night (Sunday, Monday, Tuesday, & Wednesday) and at a different time (7pm, 8pm, 9pm or 10pm). Determine the name of each friend, the title of their favorite TV show, and the day of the week and time that the show airs.

Process:
Family Tides either airs at 8pm or 9pm (statement 6). Al's favorite isn't FT, Roger likes the 10pm show & FT airs an hour after the show Gary likes, so we can conclude Mike's favorite is FT. FT has to air at 8pm (statement 5). Gary's favorite has to be the 7pm show which is Explorer. Monday show airs at 9pm and Roger watches 10pm show, not on a Wednesday. We can conclude that Roger's favorite is the 10pm show on Tuesday (Z-Files). Al watches 9pm show FBI on Monday. Since Gary doesn't watch a show on Sunday, Explorer airs on Wednesday 7pm & FT airs on Sunday 8pm.

This question can be solved that way: 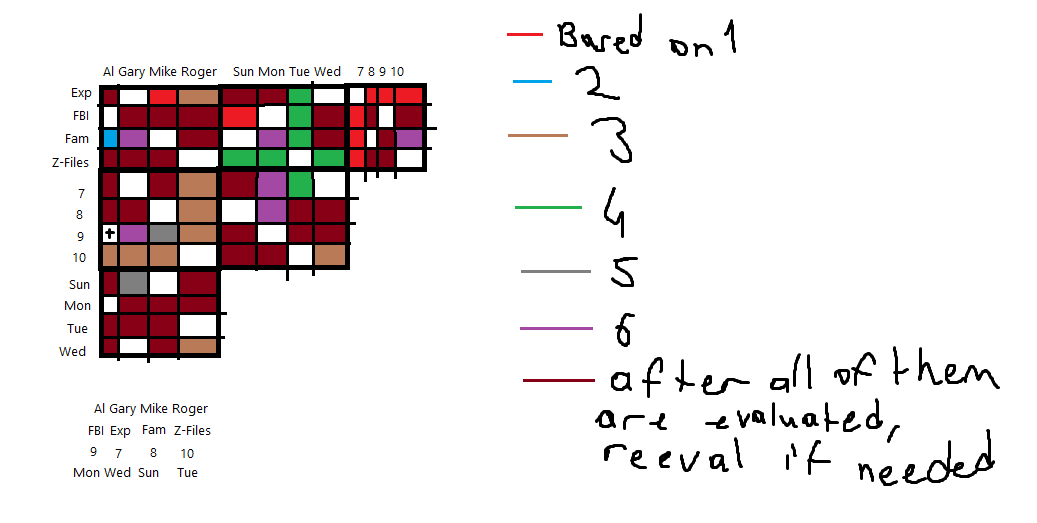 Not the answer you're looking for? Browse other questions tagged logic-grid or ask your own question.