A chess board with numbers

A 8x8 chess board is marked with the numbers from 1 to 64 sequentially from left to right, row by row and top to bottom. Now a minus sign is added to 32 of those numbers such that in each row and in each column there are exactly 4 positive and 4 negative numbers. All 64 numbers are now added up.

What is the smallest sum, which can be achieved? 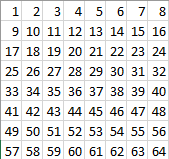 The smallest sum that can be achieved is

This will always be the sum

This is one of the first on puzzling.SE that I can actually do! :)

Not the answer you're looking for? Browse other questions tagged mathematics lateral-thinking checkerboard or ask your own question.

6
Pedro's pawn game
4
Increasing rows and columns
4
Solving a Rullo Puzzle
19
Primes less than 100 in a 4 x 4 board
4
k-threats Chinese Cannons Chess: Part 1
2
4x4 square with no increasing triples
5
8x8 square with no adjacent numbers summing to a prime
12
Transform each square of a chessboard to zero
3
Exchanging stones on a 8x8 board with sum of two adjacent numbers not being prime