... can be folded onto the surface of a cube in a way that perfectly covers the entire cube with no gaps and no overlaps.

How can it be done?

(You may notice that the placement of the two little "bite marks" is not quite symmetrical. This is not a mistake, it's a challenge.)

The area is 150 units, each face area is 25, so side length is 5. The folds cannot be orthogonal with simple 5x5 squares, because the longest run is 34, which would be more than 4 face widths.

So I guessed that the grid will be based on a 3-4-5 right triangle.
The graphic shows the grid points stepping 3 units one way and 4 the other.

But how to align the grid?
After a couple of trials I noticed it can be arranged so the extreme tips are on grid points, and one corner of every notch too. Then when I cut and folded, I could see how tiny triangles would fold and meet at corners, such as the pairs at each end of the central bar. They are not exactly half-squares, but they join to each other when the cube corner is folded. There is also a minute triangle by one of the notches, which manages to fit somewhere, perhaps in the marked place shown in the next part-build photo. My crafting was wildly inaccurate with large gaps in places, but I am fairly sure I found the correct solution. 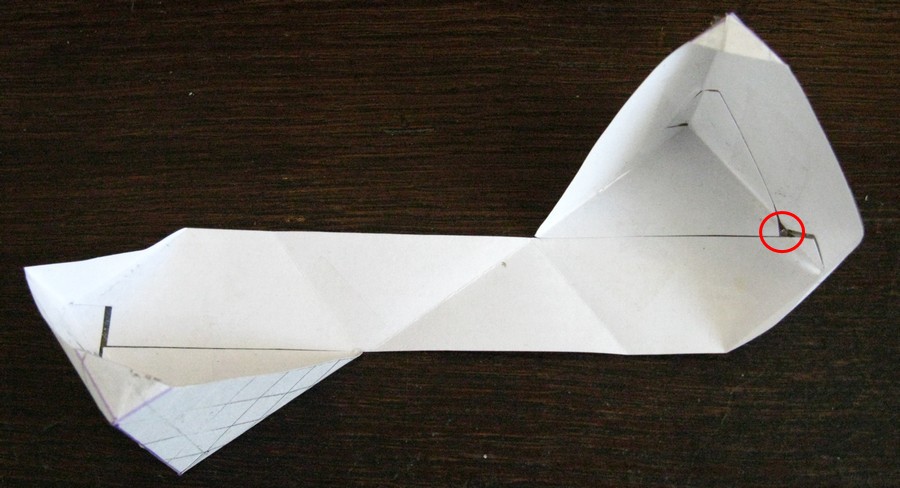 The red line marking on the photo was fairly tricky (and possibly incomplete), as I don't think there are two faces which are quite the same. As for the lack of symmetry noted in the question, either of those two notches could be moved along by one unit (so that the other internal corner is on the grid point) to make the shape symmetrical. A nice touch by @plasticinsect!

These puzzles are getting harder and harder. In this case it was impossible for me to eyeball where any face would be, and it only started to make sense once I started cutting and folding.

Not the answer you're looking for? Browse other questions tagged geometry three-dimensional paper-folding or ask your own question.

26
How can this fractal shape perfectly cover a certain platonic solid?