On The Subject of Battleships

On The Subject of Battleships 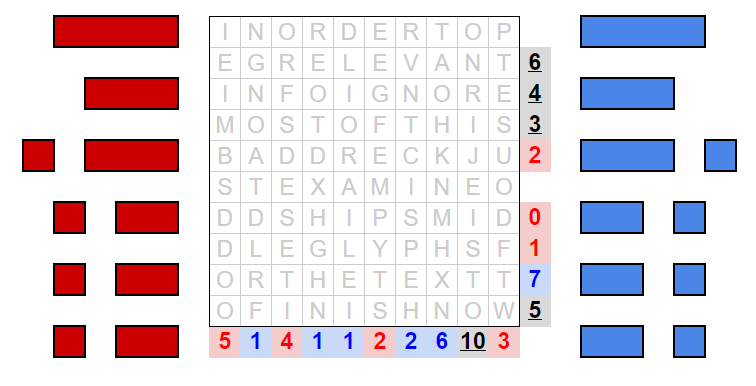 Your final answer will have 19 letters. 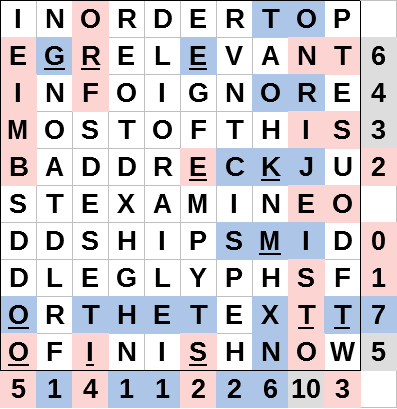 The grid has the following text: "In order to peg relevant info, ignore most of this bad dreck, just examine odd ships middle glyphs for the text to finish now". After solving the grid, the middle glyphs of all ships of odd lengths reveal the message "Greek motto is" which solves to "Eleftheria i thanatos".

Starting with the assumption that we have two battleship grids in one with grey numbers representing the sum of red and blue ships.

Having reached $20$ tiles from the red column clues, every column without a red clue does not contain any red ships. The two rightmost columns for red have to be filled by $3 \times S2$ horizonally and $1 \times S3$ vertically at the bottom. 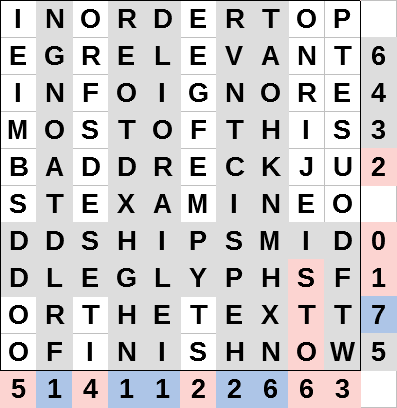 Next we take a look at the second and third columns from the right for blue. To fill these in, we need $4 \times S2+$ horizontally and $1 \times S2$ vertically. The second row from the bottom tells us that the vertical $S2$ has to be at the bottom and that the $S4$ has to be placed in that row as well. This leaves only $4 \times S1$ to place, two of which have to be placed in the same row as the $S4$. This places only $1$ blue tile in the bottom row, leaving $4$ tiles for red to instantly fill in. 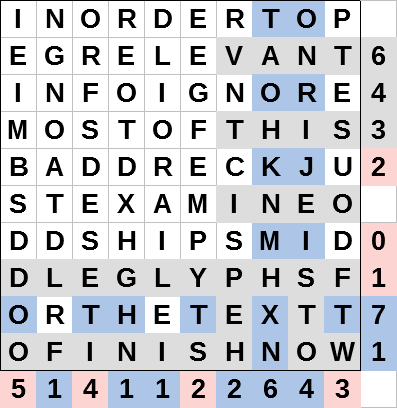 Since blue has only $2 \times S1$ left, the second row from the top can at most contain $2$ blue tiles and has to contain at least $4$ red tiles. With this information we can solve the red grid completely and split the remaining grey clues into the two colors.

To fill in the few remaining blue tiles, we have to notice that red and blue ships can not overlap. This gives us the solution to the second row and lets us fill in the rest of the grid.