Can you solve my meta-problem?

This is a metapuzzle of Bongard problems. Rules (quoted from here)

This is the problem: 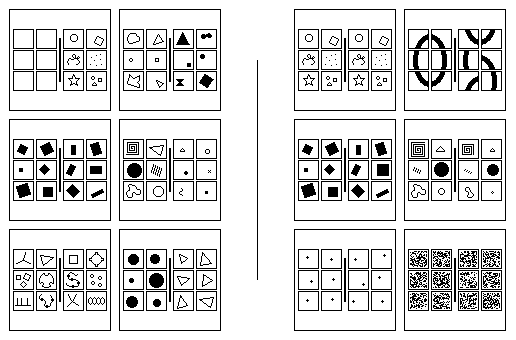 I use the following reference system: 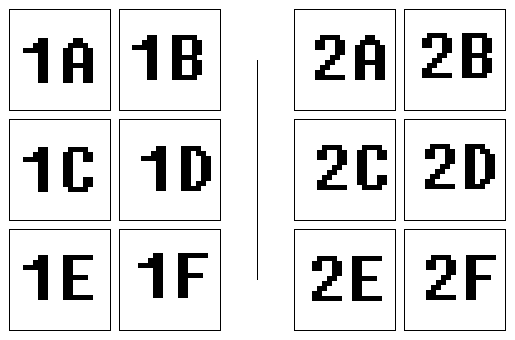 The Bongard problems on the 1 side of the Meta-Bongard are all easy to solve (Numbers are OP's reference system):

The 2 side is significantly harder... (Bold Numbers are Meta-Bongard box, Italic are Bongard)

Here, the two sides are exactly the same, so there is no possible rule to differentiate them.

Here, there is an apparent rule: Arranged | Scrambled.
Unfortunately, the order of the pieces cannot be used to distinguish the sides of a Bongard problem, and the pieces themselves are otherwise identical.

This one is the same as 1C - except that its 2D has been replaced with a Square, breaking the rule and preventing a new rule from being possible (as the shapes are otherwise identical or randomized).

Here, the two sides are almost, but not quite, identical - shades of 2A! There is an apparent rule here, though: Bigger | Smaller.
Unfortunately, much like in 2B, this sort of comparison isn't a valid way to make a rule, and the "small" things are too close in size to the "big" things to just copy-paste the rule for 1D.

Here, both sides are just a single dot, randomly placed. There's almost a rule here (Centered | Not Centered), but 2F breaks it.

Here, both sides are just noise. I'm sure a dedicated computer could tease a rule out of this one, but it won't be human readable and will feel very contrived - best not to bother.

So what's the rule for the Meta-Bongard?

Not the answer you're looking for? Browse other questions tagged metapuzzles bongard or ask your own question.

10
What is the answer to this Bongard problem?