Small idea for a Crossword Puzzle 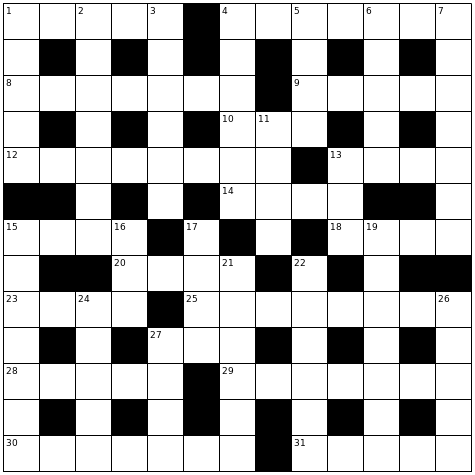 This is my first cryptic crossword so constructive feedback is welcome. 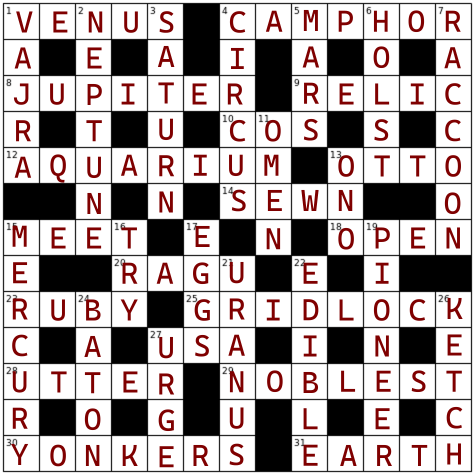 Wordplay explanations, with thanks to jafe for pointing out something important that I'd missed:

6d points out a theme here: either of the answers are names of planets in our solar system.

Some feedback as requested:

JIT in 8a is pretty damn obscure.
I like the misdirection in 13a where the bus driver, not the bus, is yellow.
14a seems to have the wrong tense.
18a is a nice find.
In 20a the def seems slightly out; surely a ragu is, importantly, a meat and tomato sauce.
In 25a, the wordplay is a bit too close semantically to the actual answer -- "gridlock" really is grid + lock, the grid in question really is a mesh, and the lock in question really is a jam. (We even use the term "traffic jam".)
I like the misdirection in 30a, where "New York City" means a city in New York State but not NYC.
1d is an indirect anagram. You're not meant to do that. Also, "ajar" doesn't mean "half-open door", it means "half-open".
I'm not sure that "Oxford station" can validly define CIRCUS in 4d, even though there is indeed a (London) train station called "Oxford Circus".
I'm not keen on "getting" in 11d. Also, while indeed the movie was called "Finding Nemo", IIRC it's not that Nemo was elusive, it's that he had been captured, which is kinda different.
One of the defs in 16d is a little iffy; a try scores five points but it's not true that it is five points.
I'm not totally convinced by the def in 17d; to egg on is to encourage, but I'm not sure that to egg is.
In 21d, "Sounds like U" is an adjectival phrase that describes U rather than a definition of it, which is a little naughty, though this is a fairly common variety of naughtiness.

(Note: for hopefully-obvious reasons most of the feedback is critical; that doesn't mean this was a bad puzzle; it was fun.)