A trip around the United States

My journey so far has taken me to the following cities in order: New York (where I started from), Baltimore, Cincinnati, Sioux City, Monroe (La.), and Columbus (Ga.). What's my next stop?

I can never go back to New York.

Placing all locations on a map, you get an outline of the borders of the United States mainland(except Alaska), in approx. half size. This is hinted at in the title; «around the US» It seems as the cities are placed at locations where there is a major change in direction of the border. Jacksonville is located approximately where Brownsville, Texas would be. 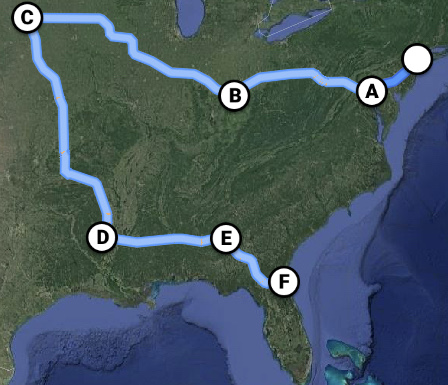 Your next stop would be:

in Castle Pines, Colorado, since averaging all of the coordinates of the given cities results in this coordinate.

27
Is there a proof that a map of the United States requires 4 colors?
1
A cryptic ranking of the US-states
3
Calculate a mystery number: Add the number of United States …
14
Touring the United States
19
The Absorbing State
19
Planning a round-the-world trip
15
United States Towns/States Traversing by Name Puzzle
13
A trip around the United Kingdom?
13
An artistic trip
16
Story of a hag and of a hog