With the necessary bars: 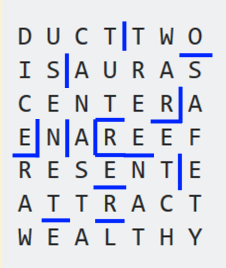 At this point I tried two Wrong Things, which I document here for the sake of honesty. First

I treated the puzzle as a marble-maze -- this much turns out to have been correct -- and tried to find a 6-segment path from location (2,2), meaning the S near top left, though the T near bottom left was also a possibility, to the centre, such that the letters along it spell out something useful. I couldn't make that work.

I looked up "marble tumble", found that it's a KTANE thing, and found some very unconvincing words I could make by treating this puzzle as one of those. I won't go into details because, as I say, it was all rather unconvincing.

Thankfully hdsdv is cleverer than I am, and pointed out in comments that

if we go back to the marble-maze idea -- which in fact is stated explicitly in the second sentence of the instructions -- but (1) require that the marble always goes as far as it can in the selected direction and (2) only use the letters it stops at, then we can get from start to end making the word STARTER.