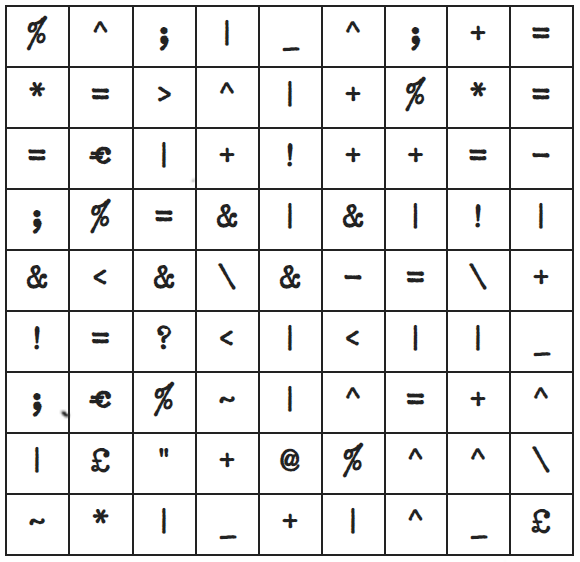 Each characters on the board is:

Now it's our duty to:

find which character represents which letter, so that all words below can be found (as in word-search puzzle) on the board either in horizontal, vertical, or diagonal (and even in backward order!)

Some first steps are:

Then here is the result: 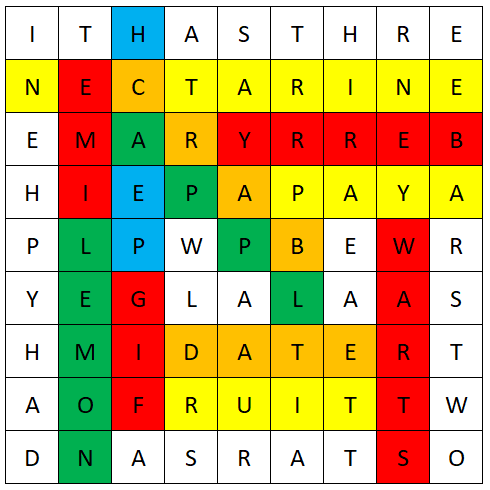 To extract the final answer:

Read the letters on the outer-side, in clockwise direction, starting from top-left letter. We can have IT HAS THREE BARS TWO STARS AND A HYPHEN.

As commented by hdsdv, this is related to above board:

Thus the final answer is:

find a correspondence between the 20 symbols used in the grid and the 20 letters in the words under it, so as to allow us to find those words in the grid. NECTARINE is the obvious way in here, being as long a word as will fit in the grid with some handily repeated letters. After a few minutes' trial and error we get:

we can read around the outside: IT HAS THREE STARS TWO BARS AND A HYPHEN.

[EDITED to add:] ... Huh, I misread (as I found from athin's answer, posted two minutes after mine). In fact it's

I've amended what follows accordingly (it doesn't much change my state of knowledge and/or ignorance).

My first thought is

that maybe the "stars" and "bars" are on a national flag ("the Stars and Bars" being a colloquial term for the US flag [EDITED to add:] ... no, turns out I was wrong about that, it's a term for the first Confederate flag; thanks to Mark Tilford for pointing this out in comments), but I can't find any national flag with three bars and two stars, and the only country with a hyphen in its name seems to be Guinea-Bissau, whose flag has one star -- though it does have three (not all parallel) bars, at least if you consider any rectangular region to be a bar. The flag of the District of Columbia has three stars and (depending on how you count) two bars, matching my misreading but not the correct reading -- but, in any case, no hyphen.

There must be any number of

hotels that have two stars in someone's rating, three bars for drinking in, and a hyphenated name (though probably fewer than have three stars and two bars, which is what I originally thought I was looking for),

but "any number" is too many.

I'm out of ideas -- or rather I have too many, no obvious way to filter them, and so far no sudden lightning strike of inspiration.

Celebrities? Balls of fusing hydrogen? Stars on a flag or in a logo? Asterisks? Places where alcohol is served? Metal rods? Stripes on a flag? Musical measures? Prohibitions?

Each character represents a single letter. We can recover each letter with various ways. I started from matching PAPAYA first, because it has unique pattern. 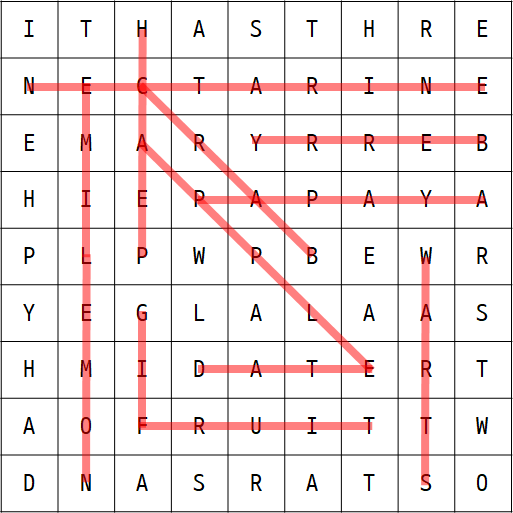 If we read letters around the outside, we get IT HAS THREE BARS, TWO STARS AND A HYPHEN

A bar(_) represents S, a star(*) represents N and a hyphen(-) represents B.
THREE BARS, TWO STARS AND A HYPHEN contains three Ss, two Ns and a B.

Not the answer you're looking for? Browse other questions tagged enigmatic-puzzle word-search or ask your own question.