I'm looking for a kids' logical puzzle I saw in a Brazilian puzzle magazine several years ago. A farmer had a square farm with four houses and twelve trees and he wanted to divide it between his four daughters. Each daughter had to have three trees and one house on her part of the land. Areas did not need to be the same.

It is NOT this puzzle: https://www.geeksforgeeks.org/puzzle-divide-square-land-among-4-sons/, nor this one: http://supercuca.blogspot.com/2011/05/, which have similar premises.

The catch was that the division must be done with two straight lines through the drawing of the land.

(H for houses, T for trees). Two orthogonal lines solved the puzzle. But I recall that the position of houses and trees seemed more random. The drawing was very childlike, with lots of spaces between houses and trees.

Do you know of such a puzzle? I've been searching Google images for some time without success.

Here is a puzzle that is similar to the one I described: 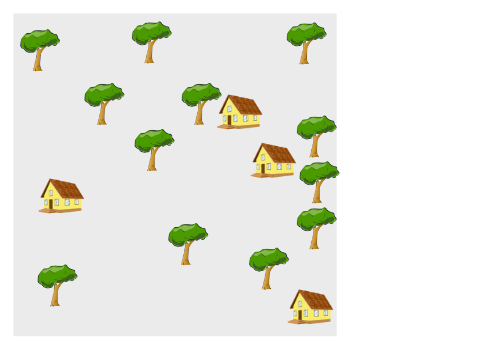 Is there a name for this type of puzzle? Or at least a broad category, e.g. geometric/visual?

Browse other questions tagged geometry puzzle-identification or ask your own question.

11
Fastest way to collect an arbitrary army
1
Four similar triangles
8
Periodic sequences confuse all my worms
10
Polygonal Pizza
3
Shapes with 1/4 area of a quadrilatral
7
Minimum number of lines to draw 111 squares
8
Venn diagram with 7 equal regions
10
Haselbauer-Dickheiser Test no. 3: Circle divided by lines between a blue dots
8
Intersecting shapes on a flat surface
17
Sharing a field among 4 sons