One piece of a destroyed chess board

Once I met a friend and he told me the following story:

I recently cut my wooden 8x8 chess board into different rectangular pieces along the edges. Each square of the chess board has a length of one inch. I have one piece in my pocket, but you don't know its size even if I tell you the length of its diagonal and its area.

What is the size of the piece in his pocket?

So I think your friend is lying, or doesn't think much of your mathematical abilities, or is somehow wording things in a deliberately misleading way (e.g., "ha ha! you know the length and width but you don't know the thickness!").

strictly speaking, to verify that the above answer (to the modified problem with "or" instead of "and") works we would need to check that $8\times1$, $7\times$4 and $4\times2$ pieces can each occur as part of a dissection of an $8\times8$ square into integer-sized axis-aligned rectangles no two of which are the same. (Otherwise we might be able to tell the size after all.) But that isn't a very stringent requirement and in fact we can put them all into the same dissection. (So you wouldn't be able to tell what piece is in his pocket even if he showed you how he'd cut up the chessboard and told you either the diagonal or the area.) 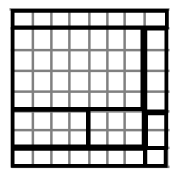 I claimed that that's the only answer, and maybe I should explain why. One possible answer would be "you can just run through all the possible diagonals with a computer", but I didn't. Here, with apologies for advanced mathematics, is what's "really" going on. If you don't know this stuff already, you will need to take it very slowly if you want to understand it :-).

That probably sounds awfully complicated, but if you're familiar with this stuff and tolerably good at mental arithmetic then it's actually pretty obvious that the solution I mentioned above is going to be the only one. A mathematics degree has to be useful for something, right?

Not the answer you're looking for? Browse other questions tagged logical-deduction geometry chess or ask your own question.

36
How many chess pieces does it take to "cover" all spaces on a chessboard?
13
Chess Game of Life
6
Squaring a cross one more time
8
Chess with bouncing and explosion
2
Chess : flawless victory
20
Chess, for short people
17
Fairy Chess #1- The Mastermind
6
A Battle of Dysfunctional Kings (Chess)
7
Chess pieces attacking exactly N chess pieces
4
Cutting a Rectangular Board