Is there a code in this painting?

This is a painting done my grandfather. I acquired it second hand from my mother. He was an electrical engineer for various government agencies between the 40's and the 80's. He painted a bunch of code like paintings in his retirement. This is one of his best works. Nobody has figured it out so I figured I would throw it out to you guys. The painting is 4ft by 3ft. He graduated from MIT in 1938 with a thesis paper on the band pass filter where the width of the band can be adjusted at will. He loved Morse code and I think this is a good lead on what this is. 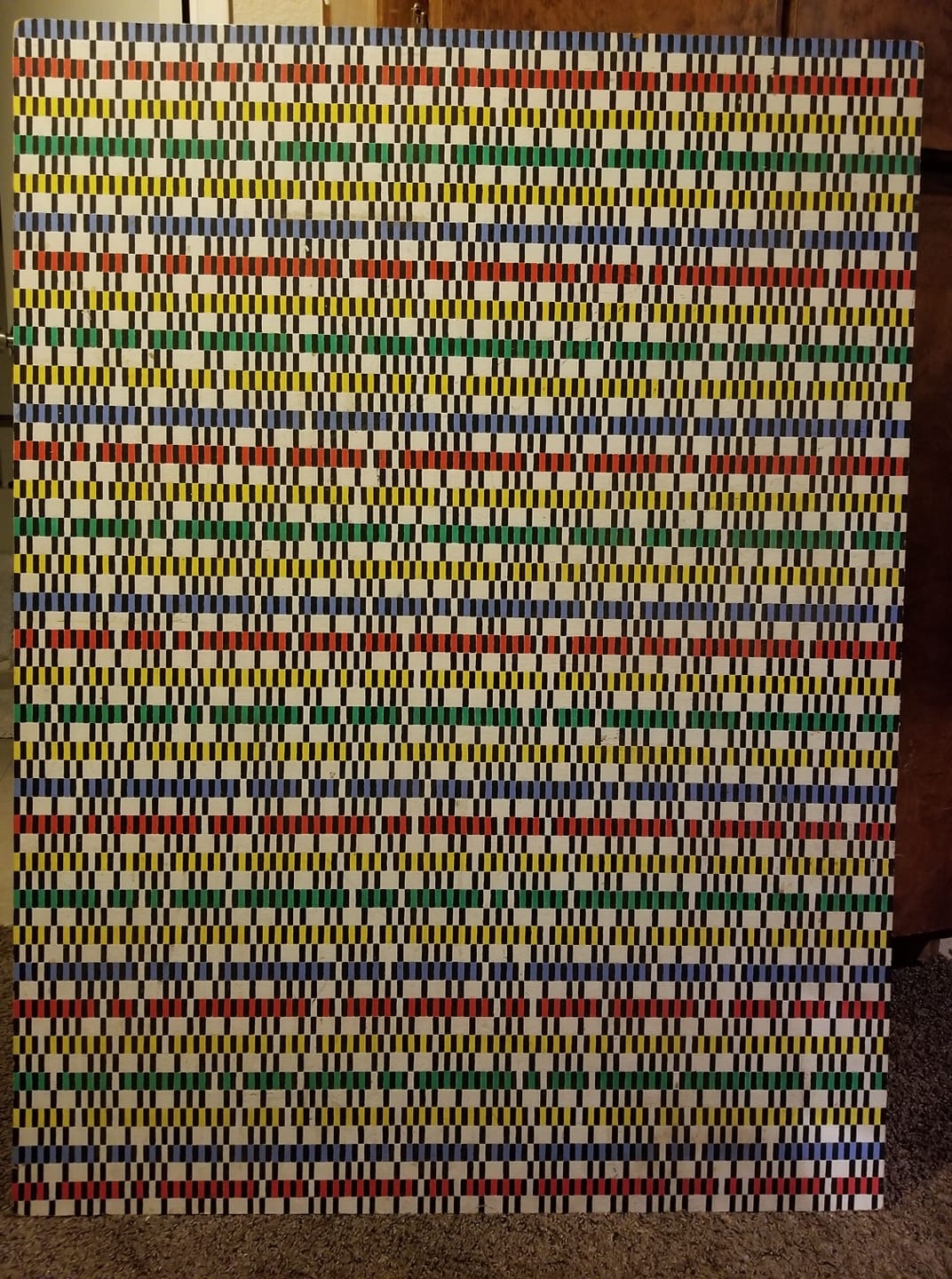 I’m not convinced there’s really a code here but I’d love to be proved wrong.

For starters, I've rectified the data in the image by manually adjusting UV coordinates in Blender: 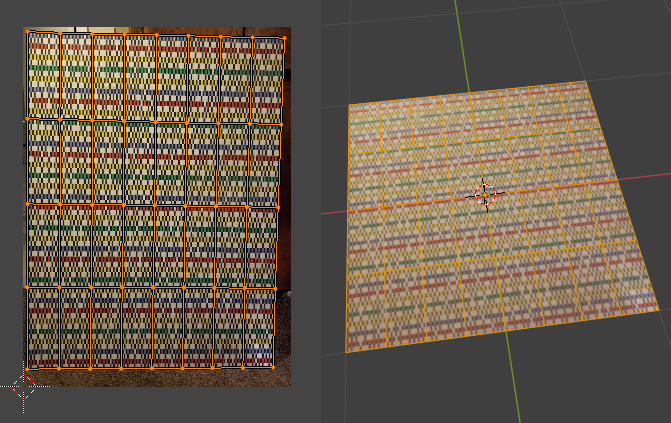 I edited the rectified image in GIMP, first rescaling to 144x64, then adjusting colors until the resulting image data is perfectly clear (one or two errors may have crept in):

Now if you look closely, every second column is just alternating black/white. Since they contain no data, let's delete those columns: 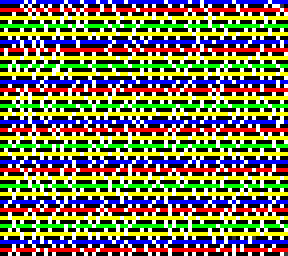 Here are a few interesting observations:

Here are the run lengths, again for your copy-paste convenience:

Note that the black stripes contain many more gaps than the colored stripes, and that black stripes are almost always some length between 1 and 4.

As far as I can tell, the few cases where the aforementioned observations are violated seem like transcription errors.

On the black/white rows, there is 6-bit code/encoded data (the original orientation is up-side down.) Here are 'paste bins' of the data/code in various formats:

Secondly, the colored rows create a pretty decent musical sequence. Whether or not that's what they actually represent, I'm not sure, but they do sound pretty good:

All Colored Rows besides yellow - https://onlinesequencer.net/1354805

Lastly, I created a tool to help with manipulating the data in the painting, such as creating musical sequences/morse code, and decoding the data as binary in a programatic fashion.

You can find that tool here: https://scret.net/encoded-painting/

Some observations that might eventually amount to something, or not:

Without the artist's signature, it's hard to know if the painting is oriented as intended. It could be upside-down. It could be sideways too, but I for one find it more aesthetically pleasing in portrait position.

When we do get it right side up, there's no guarantee that the information reads off from left to right, top to bottom, but that's what I'd try first.

The sequence of colors is so little information that it could mean anything. Perhaps there will be a satisfying explanation for it in the end, but I doubt it's a good place to start.

The monotonous sequence of marks on the color rows makes it very obvious exactly how wide the marks are on the white rows. We can treat it as a timing signal of sorts. The white glitches in the color rows only ever replace color, never black; that is, they are at odd positions, counting from the left.

There are many fewer white glitches in the color rows than there are wide white gaps (or white glitches) in the white rows. They could be encoded completely differently.

The white glitches' neighbors in the white rows are always either black marks, or the middle of wide white gaps. But this is also true of all the colored cells in the color rows. It is a consequence of the structure of the white rows.

In the white rows, the runs of white are always one or three units long. The black marks are always one unit. In correctly timed Morse code, the dits are one unit, the dahs are three units, and either element is followed by one unit of silence. If it's Morse in the white rows, it probably runs from right to left, because they always have white at the right edge. But there are two good reasons I don't think it's Morse.

First: Correctly timed Morse has two additional units of silence (total three) between characters, and four on top of that (total seven) between words. Obviously there are no black marks three or seven units wide.

I played with the idea that a white glitch in the color row substitutes for the inter-character space, and the inter-word spaces are left out (as they are in most classical cryptography). That only explains the glitches with black neighbors, not the glitches with white ones. But more fatally, it didn't make any sense out of the left end of the first white row. Reading it from left to right, it goes 4T@DDND and then di-dah-di-dah-dah-di-dit which isn't a character at all. Also, @ wasn't part of the code yet when this was painted (the 1960s, from discussions elsewhere). Reading the same span from right to left, di-di-dah-dah-di-dah-dit isn't a character either, and after that it's UAUU(T6 ... doesn't look good. Doesn't work any better if we use the glitches on the red row, either.

So is it Morse, but with the inter-character spaces gone too? That would be a heck of a thing to decipher, especially in the 1960s. If you know the statistical properties of the underlying character stream, like if you know it's in English for example, there is an algorithm for finding the most likely sequence of characters that would have emitted the dits and dahs, but that algorithm was cutting-edge in 1967, and the computing power it requires wasn't easy to come by back then either. (Nowadays your phone infers the most likely word that would cause you to hit your on-screen keyboard where you did, with probably more computing power left over than there was in the entire world in 1967.)

That would be kind of fun to try and decipher. But there's a second, subtler, stronger reason it's not Morse: Every single white row has a black mark on the right end. Never once does the line break come in the middle of a 'dah'. If it's Morse, somewhere around half of the lines should do that. I mean, yeah, technically the painter could have designed a Morse message to hit all the line breaks cleanly, but it would take way more obsessive attention to detail than painting this thing already took. More likely it's just not Morse.

That same fact rules out any kind of variable-length coding, in fact. If ever we say "3 white means this, and 1 white means that" we get stuck explaining why the line break never hits the middle of 3. It's got to be fixed-width or the framing doesn't work out.

Per another answer, in each row there are only 72 informative (i.e., non-predictable) positions. Unfortunately that gives us a wide gamut of possible widths for a fixed-width encoding: 2, 3, 4, 6, 8, 9, 12, 18, 24, or 36. Okay, the really wide ones are out because there are too many possible codes. You might think the really narrow ones are out, because there are too few possible codes -- take them two at a time, you can decode that to a 4-symbol alphabet, whoop-de-do, that's real informative, right? You're probably right. There's an outside possibility that those small alphabets could be representing English via a variable-length code of their own, but how's that supposed to be decipherable?

Not the answer you're looking for? Browse other questions tagged cipher pattern visual unsolved-mysteries or ask your own question.

8
Crack this code: AYVEKCI0
12
A peculiar painting
14
Yet there is method in this Morse code
3
What code is this?
2
CRACK THIS CODE
10
Short Puzzle: Graphic Painting
12
Crack the pigeon code
0
What kind of code is this/ is there a cipher?
4
This encoded code is the code that encoded the code