Given a 7x7 grid, what moves need to be made to get two agents on their respective opposite sides of the grid on the diagonal? 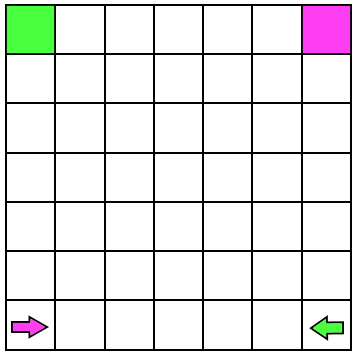 Say I had the following 7x7 grid and two agents on the grid facing one another as shown.

There is no solution.

turns are never blocked. Thus, the two agents are always facing opposite directions. Thus, anytime one agent attempts to move up, the other agent attempts to move down. The downward move can be blocked at the bottom, allowing the average vertical position to increase, but once one agent has reached the top row, it is no longer possible to increase the average vertical position above the fourth row. After that, whenever one agent moves up, the other must move down.

10
The Bunny's Tour
8
Lost In Boston: How do I Get Home?
5
The Unknown Prison of Unknown Size
6
A problem about oriented face in Square grid
5
Magic-preserving Permutations on a 4x4 Magic Square
3
Create a map of a game's portals
9
Connect the wires without setting off the bomb
11
Gaby´s Puzzle (Primes Around a Circle)