I was impressing various students at my school by showing them various twisty puzzles when one of them recalled a puzzle they owned. I thought I might have seen it somewhere, but I may have been thinking about something else.

He said it had some sort of gear mechanism, and was a two-by-two cube. But one of the key features of this cube was this: you could pull it apart on one of the axes, and turn the parts separately.

I showed him the Skewb shift, the only puzzle I was aware pulled apart, but he said that wasn't it. Exactly one axis pulled apart, and also, it was two by two.

Anyone know what cube this could be?

It is called Gear Shift: 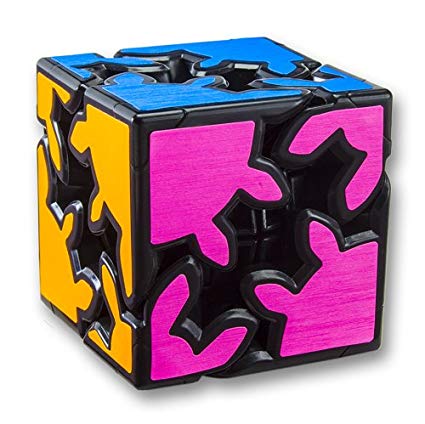 It was invented by Oskar van Deventer, and produced by Meffert.

The Skewb Shift was a later design inspired by this one.

Note however that the Gear shift can pull apart along all 3 axes (but only one at a time).

Not the answer you're looking for? Browse other questions tagged puzzle-identification twisty-puzzles or ask your own question.

15
Help with the name of this puzzle
16
What is the name (and brand / year) of this puzzle?
17
Single solved state for Sudoku Pyraminx
7
A riddle in James Still's “River of Earth”
3
Can two corners be swapped using commutators?
7
Illegal patterns for the Rubik's cube
8
Six inch, clear plastic binary counting puzzle
5
What do you call this Twisty puzzle?