Density-type puzzle: Having A Good Day?

Here's another Density puzzle. I've got to say, I really like making these. Part of this is pretty simple, and part of it is much more complicated. Let's see what happens! Here it is: 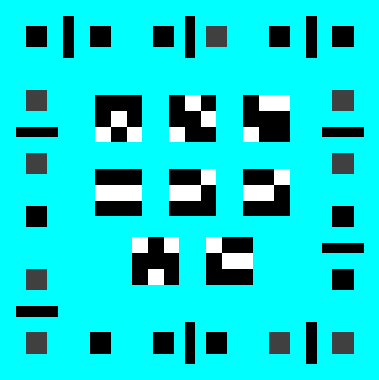 I am quite fond of disguising Morse code.

First, focus on the border of nine sets of black/grey squares separated by bars. This is:

Morse code, where a black square is a dash and a grey square is a dot. The bars separate letters. Starting top middle and proceeding clockwise, this spells "AN ANAGRAM". This suggests that the eight squares in the middle will produce the eight letters required for the solution once their order is rearranged.

Next, turn your attention to the eight central blocks of nine black-and-white 'pixels'. Since there is exactly one white pixel in each column we can infer that these are:

However, there is a slight twist here...

The ternary digits do not translate directly into A1Z26, as some puzzlers (myself included!) might have anticipated. Instead (as clarified by the OP in a comment) they are zero-indexed, i.e. they translate instead to A0Z25... Carrying out this translation results in the eight letters: DHINOOUW.

To find the solution, we need to:

Apply the anagram hint from the border to these eight letters in order to come up with a phrase in the format (3,1,4) which means 'Having A Good Day?', as suggested by the title. This lends itself to the final answer of "HOW U DOIN'?" - a way of asking this question most associated with Joey from Friends...

Not the answer you're looking for? Browse other questions tagged logical-deduction cipher visual or ask your own question.

20
How would you like your face? Scrambled?
15
Is it a bird? Is it a plane? No, it's a comet!
7
How can I figure out what this insane coded message says?
3
Little Pictures
11
I'm drawing a blank on my name, help me out?
8
Message for my club members
7
Density type puzzle
7
Density type puzzle 2
8
Density-type puzzle: __________
0
Another Zodiac Killer Puzzle