How many ways are there to read 5556789 without repeating digits?

The figure below shows a triangular arrangement with a set of numbers. Each time you read a number, you cannot repeat the same digit and the distance between the digits must be the same, and the minimum distance possible. How many different ways can the number $5556789$ be read? 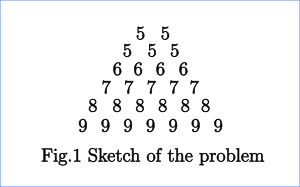 I attempted to assign a small number by counting the ways going right and left a-la Pascal triangle of combinatorics. 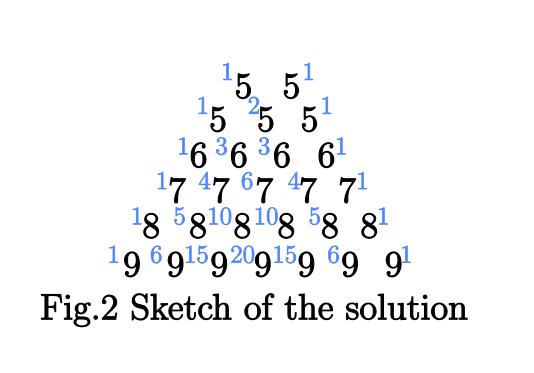 Which would mean that the number of possibilities will result from summing the numbers at the base of the triangle:

But this doesn't seem to be the answer. Can somebody tell me exactly what I am misunderstanding? How can I arrive to the right answer and more importantly how to do this? Please provide some graphic or visual aid with your answer to help me understand your solution.

I had trouble understanding the problem statement. It looks like it was translated at some point.

How I understand it, you must follow a path that reads the number, moving in any direction, but not reusing any digit, and moving only to contiguous digits.

The solution is as follows:

You must at some point reach a digit 5 followed by a 6.
So the third 5 must be on the 2nd row. From there you go down.

If i understand the problem corectly, it seems your reasoning is that you cant go "up" in your diagram, nor can you start at the second row.

As you wanted a view of all the 5 possible paths for the leftmost 5 :

as for a generalization, i don't really know, pascal triangle is good if your number can only be read from top to bottom, but as soon as you go up, or if you can start on another row than the first (think palindromic numbers, or a number composed oly of 10 times the same digit), then the numbers are going to be much greater.

Not the answer you're looking for? Browse other questions tagged combinatorics optimization or ask your own question.