Reconstructing the results of a 5-team soccer tournament

5 teams are playing in a "round-robin" soccer tournament, in which each team plays each other team once. Each game has 3 possible outcomes: team 1 wins, draw, or team 2 wins. The winning team receives 3 points, while the losing team receives 0 points. In case of a draw, both teams receive 1 point. At the end of the tournament the teams have the following points:

Based on this information, can you reconstruct the result of each game? A solution exists and it is unique.

LOGIC AS USED TO SOLVE THE PUZZLE: The first thing to note is that with 3 points for a win, 1 for a draw, and the known points totals, we must have the following end outcomes in terms of wins, draw and losses:

So what can we work out immediately? Well, we know:

Team A’s results straight away since the result of the A-D match must have been a draw, as both teams are undefeated, and A won all their other games (W3 D1 L0):

Immediately, we notice that:

Since Team A beat Team B, B cannot have drawn all of their matches (scenario (b)) and so instead we have scenario (a) for both Team B and Team C:

This means that 6 matches ended in a win for one team (and defeat for the other) and there were 4 draws in total.

What else do we know?

Well, the match between Teams C and E must have ended in a draw, since neither won a match. And then, since E lost their other matches (W0 D1 L3, remember), we must have:

We also then know that:

C’s other two matches ended in draws, since we have already ticked off one draw (vs E) and one defeat (vs A) for them, and they have a W0 D3 L1 record:

This leaves just one game left to deduce – that between B and D – which must have:

Ended in a win for undefeated team D, since B’s only draw is accounted for by the match with C (B = W1 D1 L2, recall).

And altogether, we now know the results were: 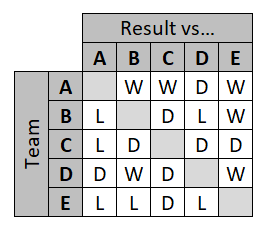 POST-SCRIPT: The steps above outline the logic I used when deducing the results. However, (noticed afterwards) it is possible to resolve the ambiguity in spoiler 1 (scenarios (a) vs (b)) and know exactly which W-D-L combination of wins, draws and losses we ultimately need to find for every team before we even begin to deduce the individual match results, since:

We can see straightaway that scenario (b) is impossible! If each team plays four matches, it is not possible for Team B to draw all four of their games while Team C draw none, since the two teams must have drawn with each other! We can therefore reason that scenario (a) applies, and deduce the full W-D-L table (as in spoiler 3) right at the outset, before proceeding with the same logic as per the answer above.

13
Reconstructing the results of a 6-team soccer tournament