Detective Inspector Playfair, an energetically boisterous policeman who often complained about Endeavour Morse having his own TV show, was sat on a bench at the side of Coldport's newly laid town square (Tile-laying for beginners ) holding a lacquered programme in one hand and a steaming-hot cup of coffe in the other. Miss Flava, who had worked with him for years, was patiently awaiting the outcome of his deductive methods.

"Coldport's Choral Ecdysiasts," said Playfair, "know more than they're letting on about the theft of an artefact from our museum. We have a man on the inside and he's sent us a message via the programme for the concert tonight. Only his handler is off sick, and I have don't have time for him to recover."

Miss Flava looked at the programme. Inside the first page was a ticket bearing the words

Admit three to room one at quarter past six pm on December nineteenth.

After that was the concert listing:

and finally there was a "fun page for children" where they could turn their names, letter by letter, into Christmas phrases. 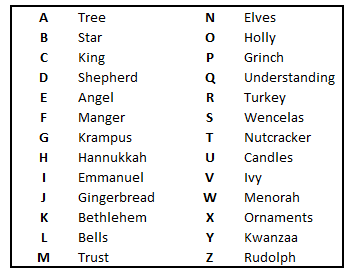 "Ignore the typo in Hanukkah," said Playfair, "it's not part of the puzzle. I know that there's something common to items in the concert listing and it will lead to the message we're after. I just haven't worked out what it is yet...."

[An ideal solution will lay out the clues and how they lead to the solution: just the three-word message is not enough.]

First of all, the ticket says

using that as the keyword to construct a Playfair square, and decrypting the gibberish with that, we get:
IN THE BLEAK MIDWINTER
IT CAME UPON A MIDNIGHT CLEAR
SEXE AMID THE WINTER'S XSNOW

(I remark pedantically that "a" should really be "the").

what's common to these carol names? MID, of course: midwinter, midnight, amid.

that translates via the children's code to TRUST EMMANUEL SHEPHERD. Perhaps that's the name of some person relevant to the case.

15
Crack the code and become happy
10
Mr. Hilbert and the Message from Outer Space
44
Secret of the universe
7
Contradictional Ceremony Puzzle
14
A simple murder mystery puzzle that I came up with
9
Cryptic Puzzle for Puzzlers: PART II
6
Find the location of the royal artifacts
8
Place of Safety - A North Daniels' Puzzle
18
PSE Advent Calendar 2021 (Day 18): A Reunion, and Christmas Decorations