With all twelve labours finally completed, Hercules slunk back home, exhausted. His mother was cooking dinner in the kitchen when he arrived, and the first thing she asked him was whether he’d ticked off everything on the list.

“Yes, mum,” Hercules gasped, slumping down into a chair at the kitchen table and letting Cerberus off his lead. No sooner had he allowed his head to collapse onto his folded arms than he felt a repeated prodding sensation in his side.

“Get up, get up, get up!” his mother cried, brandishing a wooden spoon. “You mustn’t go sleeping there – there’s one more thing you need to do. Did you bring everything that you collected on your errands?”

Wordlessly, Hercules showed her everything he’d accumulated over the day. Taking the football strips, beef and apples from him, all that now remained were the twelve special items:

The STRAITJACKET, the SALAD BOWL, the BACKSCRATCHER, the WOODSTOVE, the MONEY PLANT, the BULLION, the CORNER FLAG, the betting slip for STRING BEANS, the STOP SIGN belt buckle, the PAINTER’S TAPE, the CUPCAKES, and the HORSEWHIP.

“Right,” said his mother. “Now, you take those twelve items into the front room – I’ve redecorated while you were out, why don’t you take a look?”

Raising himself from the chair with a groan, Hercules did as his mother had suggested. The living room had indeed been redecorated. Previously the walls had been blank, painted white; however, twelve pictures now stood framed upon the walls: 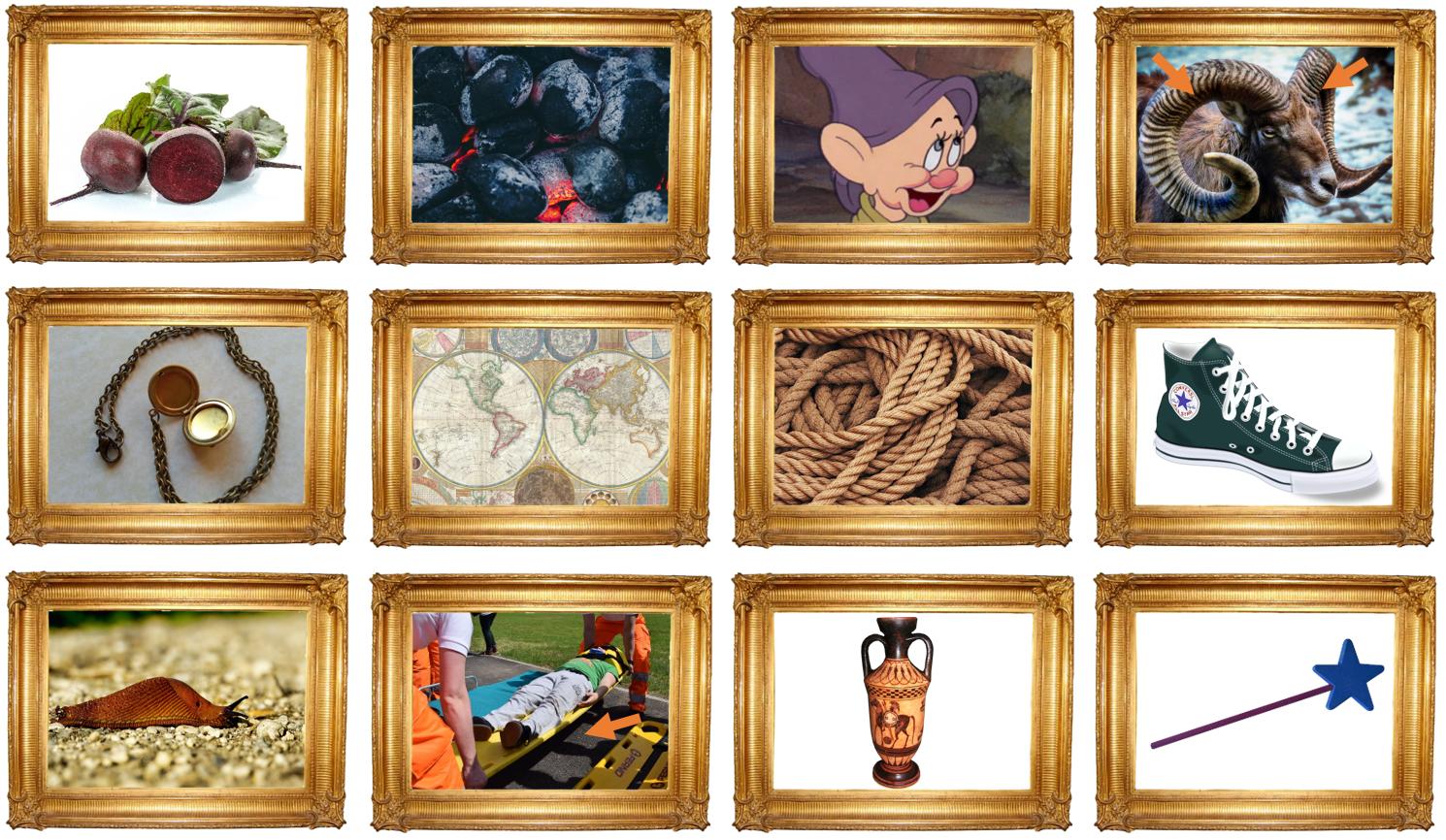 “Very nice,” said Hercules, moving back towards the door... only to find it locked. “Mum?” he called. “No more puzzles, please – I’m so tired.”

“Last one, dear,” said his mother. “I just want you to take a look at those twelve new pictures... and think about the twelve items you’ve collected... then when you can tell me what one final task awaits you, I’ll let you out.”

Hercules sighed heavily. Fine, he thought to himself, let’s just do this. He stared long and hard at all of the pictures and items and after a while he finally managed to abstract another instruction... but it seemed wrong. In fact, it seemed like the kind of instruction that might have been given to his ancient namesake rather than himself – surely, it wasn’t meant to be taken literally?

“Mum, I know the answer,” he called, and then told her what he’d derived from her final puzzle. His mother smiled.

“No, no,” said his mother, “Thank you – you’ve worked exceptionally hard today.”

Hercules smiled, climbed the stairs, shut the bedroom door behind him, and flung himself down on his bed. Within seconds he was sound asleep...

TASK: What was the final, extra task encoded within the pictures? This is a meta-puzzle – the solutions to the twelve original labours are all involved.

can each be split into two words. (The way to do this is obvious for most, but BULLION needs the split BULL/ION.)

One half of each answer corresponds with a picture - specifically, it is the same as one of the pictures, but with exactly two letters changed. For example, the JACKET of STRAITJACKET turns into a LOCKET; the BOWL of SALAD BOWL turns into COAL.

To get the instruction,

take the changed letters from the pictures, in answer order. This spells "LOCATE AND PURSUE THE ROMANS".

use the other halves of the answers: each one has a Roman numeral in it. Not only that, but it's almost always exactly one. (Only two of the unused answer-halves, SALAD and BULL, have two.)

To "pursue" these, simply take the letter after them. (And note that in both of the two-Roman-numeral cases, one of the two is at the end, so there is only one way to follow the instruction.)
This spells out Hercules' final task: TAKE A LONG NAP, an instruction I'm sure he was all too happy to follow!

Not the answer you're looking for? Browse other questions tagged enigmatic-puzzle visual story metapuzzles or ask your own question.