Inspired by my last riddle: Three Tongues of Rock

He sings of dark art

The third he sings

Of men who wear dresses

This one should be pretty easy. Enjoy.

Although others have recognised 2 of the 3 concealed identities correctly, I believe they have not spotted (or explicitly mentioned) the theme, which is:

Rock acts who are well known for some reason for their TONGUES (hence the title, providing an alternative punny meaning to the title of the OP's linked question).

One is round
He sings of dark art

As @MatthewWells has pointed out, #1 is the Rolling Stones (or specifically Mick Jagger, the lead singer). A stone is round, and 'Paint It Black' is one of their best known songs. The band's logo is based on a cartoon image of Mick Jagger's mouth with the tongue protruding: 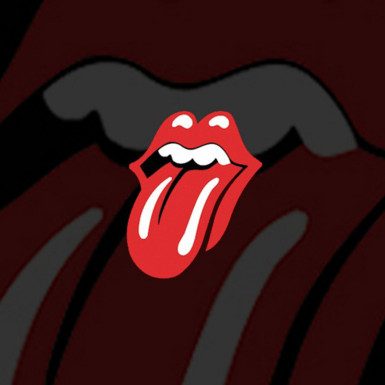 One with lips
He gently caresses

As @shoover mentioned, this would be the band KISS, with a specific nod towards their frontman, Gene Simmons. Simmons is renowned for sticking his tongue out during performances, and at one point there was even a rumour that he had a cow's tongue grafted onto his own in order to make it longer. (This rumour has thus far not been found to be true!) 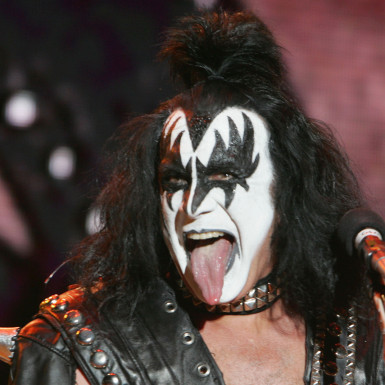 The third he sings
Of men who wear dresses

I believe that this final couplet refers to Aerosmith - and specifically lead singer Steven Tyler - who sing "Dude (Looks Like a Lady)". Tyler's tongue is particularly famous for being the subject of many of his lyrics. For example, "I shove my tongue right between your cheeks" in "F.I.N.E." (see also "Taste of India" and "Back in the Saddle" for further examples, although note not all readers will be comfortable with the lyrics!). 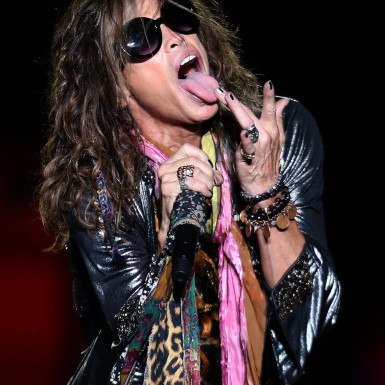 Note that all of these are so renowned for this particular thing that:

They all feature in a six-item 'listicle' on the rollingstone.com website (from where I have borrowed the images within this answer).

The Rolling Stones: A rolling stone is round, and they sung "Paint it Black" - a dark art.

Not the answer you're looking for? Browse other questions tagged riddle music or ask your own question.

24
Rock Paper Scissors - Alter Egos
4
A grave deception
14
Literary Haikus
14
Who are my three friends?
7
A Maze of Sorts
9
Three Things Am I
8
Teapot Riddle no.11 (fan made)
10
I am the light that shines in the dark
14
The state of the art in music puzzles
7
Three Tongues of Rock