The ants from this puzzle have been placed into a new arena: a cross-shaped hallway with a pillar (black square) in the centre and four statues (numbered 1-4) set symmetrically. 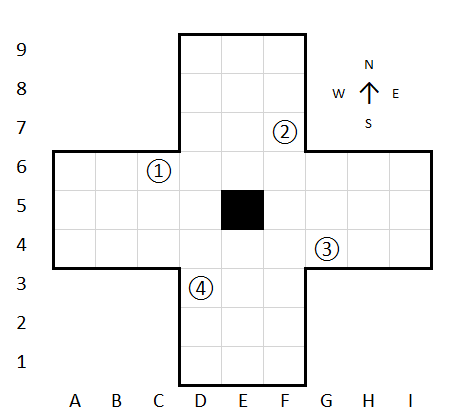 The ants, like last time, start off by trying to move East. If they encounter a boundary, the central pillar, a statue, or a cell they've already visited they turn to their left (if heading East, they turn North, if heading North they turn to the West, etc.) seeking a free direction to walk. They always move as far as they can in their chosen direction. When they cannot move anymore, they stop. As the arena is presented, it is (relatively) easy to find an ant-trail that covers all the squares and ends adjacent to the ant's starting square. So your task is:

Move one statue to a new position and identify a starting cell for the ant so that the ant covers all the free cells on its walk and does not return to the start of its walk.

I believe there is only one solution modulo rotational symmetry.

EDIT: ...and I'm wrong; there are at least two since JMP found one I didn't! 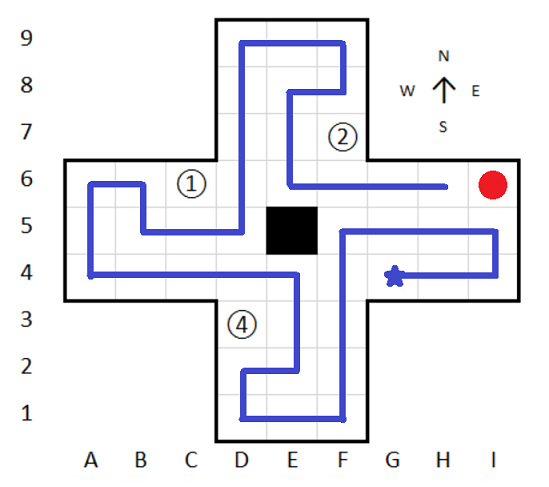 Start at the star and finish at the red circle.

18
How to create a pure mathematical-logical based puzzle equivalent to resistance based physical puzzle?
4
Two Armies of Ants
6
The directions from another language?
8
Pathfinding with disappearing platforms - is it solvable?
45
Edward's Maze I
5
A Battle of Dysfunctional Kings (Chess)
33
lolcatz can haz ur infinit cheeseboard
12
Twelve Labours - Prologue
11
Perambulating ants