It was coming up to five-twenty-five and Hercules had finally reached the last item on his laborious list for the day. Knowing that Pluto Pups, the local dog kennels, closed at five-thirty he made his way there at a canter, still towing his flatbed trolley, which was beginning to sway dangerously under the weight of all the items upon it. Dumping it at the door, he sprinted inside and ran headlong into Des, the manager. The impact caused Des to fly backwards into a magnetic whiteboard, and with a great cascading crash the manager, the whiteboard and almost all of the letter magnets upon it fell to the floor.

“Hey, Des,” panted Hercules, helping him to his feet. “I’m really sorry. I was in a bit of a rush. Need to pick up Cerberus for Mum and knew you were closing soon.”

Des frowned. “Well, I was closing soon, but now I need to clear this lot up. The board’s supposed to list all of the dogs currently in the kennels here, along with their breed and the owner’s name.” Des gestured towards the board; all that remained on it were some printed-out photos, a handful of letter magnets, and some words written in marker pen. The fallen magnets lay in a heap on the floor. 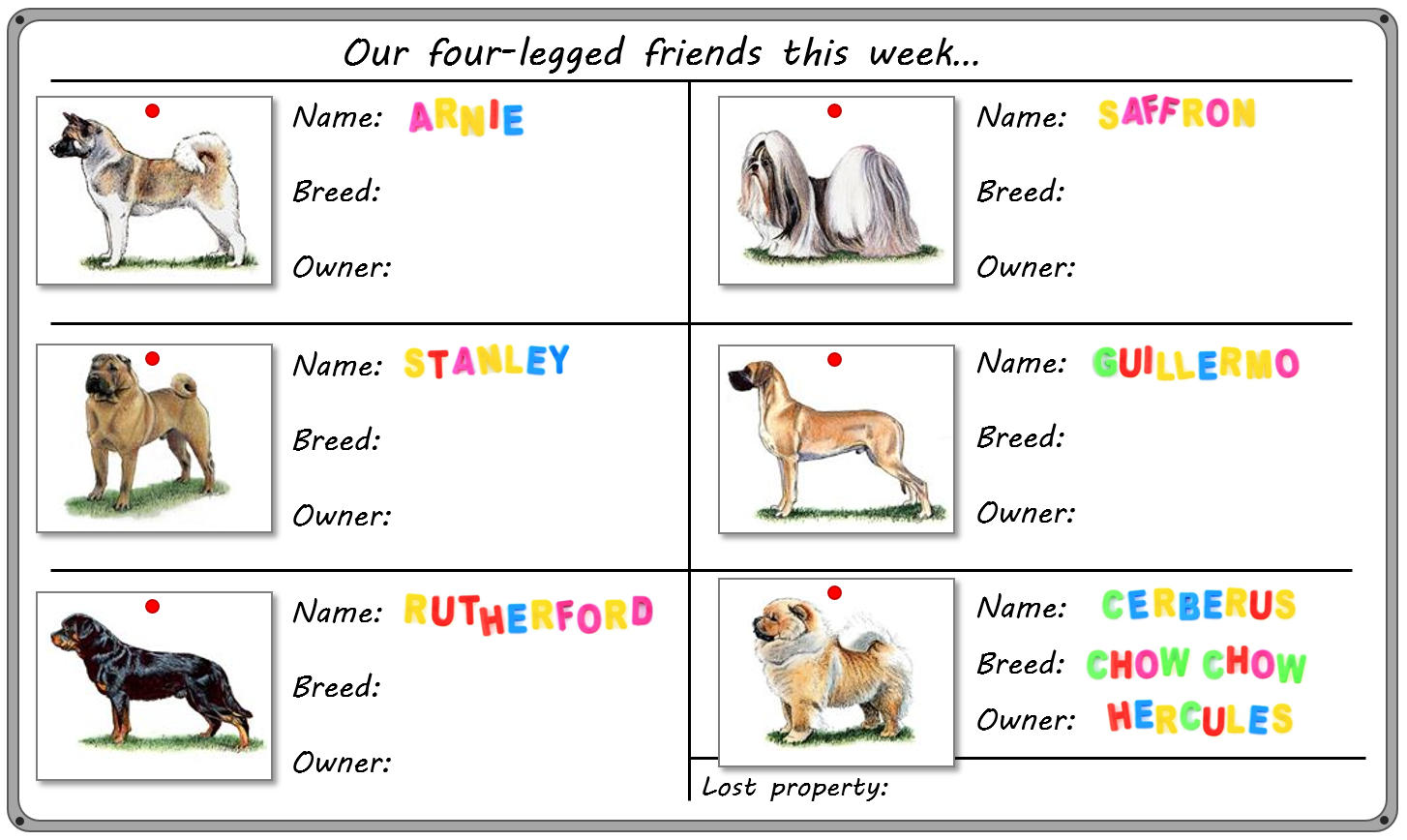 “Let me help,” said Hercules, beginning to sort the fallen magnets alphabetically. “What were the customers’ names?”

“That’s the thing,” said Des, shaking his head. “I can’t remember exactly. All I can recall is that:

One of them is a past winner of the Golden Boot at football’s World Cup;
One of them has portrayed Doctor Watson on TV or film;
One of them fronts arguably the best-selling American hard rock band of all time;
One of them is a rap and G-Funk superstar from Compton, California;
And the other one is a World Series MVP who spent his entire playing career with the New York Yankees.”

“Huh,” said Hercules. “You can’t remember their names, but you can remember all that...?!”

“Tell me about it,” said Des. “The thing is, I really should remember them, because I recall noticing that:

Each of their names rhymes with the breed of their dog!

“Oh, and one final thing-” he added, “The letters left over should spell out an item that’s been left in our Lost Property box so long I said your mother could have it. I have no idea why she wanted it – it’s a piece of equipment you’d use with a type of animal I know she doesn’t even own...”

TASK: Use the fallen letters (below) to reconstruct the dog breeds and the rhyming names of their owners. Use the leftover letters to deduce the item that has been left in Lost Property.

NB The no-computers tag has been used to try and steer puzzlers away from online anagram generators; you are, of course, welcome to use the Internet for identifying the owners from their descriptions.

The letters can be replaced as follows:

And the remaining letters spell

HORSEWHIP which indeed is not generally useful for dogs, but I'm sure Hercules's mother will find a use for it...

(Arnie's owner gave me some difficulty, because

In my dialect (Canadian English), AKITA and JETER do not rhyme at all.)

Not the answer you're looking for? Browse other questions tagged knowledge rhyme no-computers anagram or ask your own question.

8
The Three There from the Beginning
9
Recover book titles and suggest more books
11
Password Strength
7
What Was Their Name That Person?
8
I was inspired to create another anagram puzzle
8
A manager's dilemma
5
The Binomial Elks Club
16
Twelve past eleven at the police station
11
A Sergeant Sequence Sequel (fan-fic)
16
Connect Wall of Flags: Don't Embarrass Us