An ant is a methodical creature, and the ants in this puzzle are particularly so. When they start walking they always walk in a straight line, and when they reach a boundary they always turn exactly $90^\circ$ anticlockwise. If they still cannot move, they turn through $180^\circ$ and try to move. After this they have tried all directions and so stop. (Put otherwise, the ant tries turning left; if that fails, it tries turning right from its original heading.)

When an ant is set on the lower left corner on a $5\times 5$ board, as shown below as cell $A1$, and it treats any cell it has already visited, as well as the edges of the board, as boundaries, it traverses the entire board (as shown in blue). 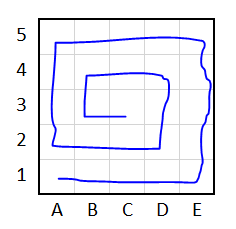 However, if the ant starts in a different cell, say $B3$ then it omits some cells on its journey, as shown: 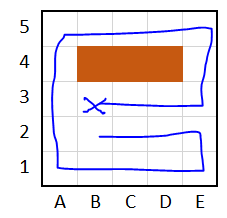 Given the $11\times 11$ grid below, there are two starting cells for such an ant that omit exactly one cell when the ant cannot move any more. The ant always starts moving the $A \rightarrow K$ direction, unless it starts in column $K$ in which case, applying the $90^\circ$ rule, it moves up. Which two cells are they?

EDIT: As pointed out by Stiv there is actually only one starting cell for which the ant will omit a single cell, not two. 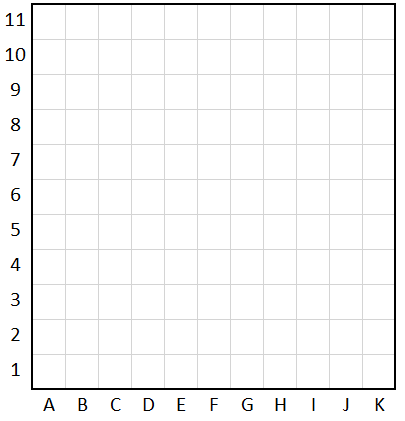 Say the starting point is row number $n>1$, column letter $l$, and exactly one cell is omitted. The ant's journey can be described as follows:

The only possible starting point is 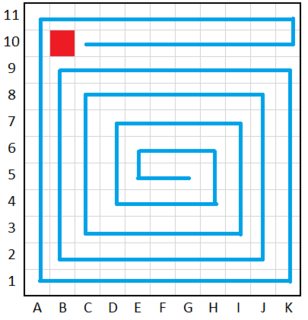 The two starting cells were C10 and D3 if the ant has a memory, and tests it's previous turn orientation before trying the other way, otherwise just C10.

2
The Moving Bots
64
Three mathematicians are forever in Prison
31
Color elimination puzzle
1
Guide the dots to land on the portals at the same time
3
Guide dots to land on any pair of matching portals at the same time
21
Chess Connect Puzzle
3
Perambulating ants 2
13
Sudoku variation: Using various chess moves, solve the grid from just two numbers