Controlling a robot blindfolded on ANY 2x2 grid

This puzzle is based on the framework described here: Controlling a robot blindfolded on a 9x9 grid

Here is a quick summary. A robot is located somewhere on a grid, but you cannot see it. You can send commands to the robot to make it move one cell left, right, up or down. Some cells can be walls. If a robot hits a wall it stays in its current cell. Your task is to guide the robot to the target cell. Once the robot reaches the target, the game will terminate immediately.

Assuming that the walls replace a cell of a grid like in the 9x9 version and are not located between two cells.

I found a solution with 9 moves: RDLURULDR 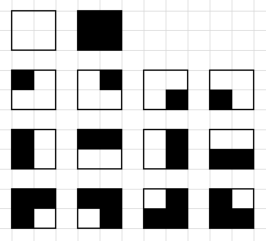 We can forget about the all black grid (not solvable) and grids with three walls (solved without a move).
To cover the grids with two walls our sequence must contain at least one Up(U), one Down(D), one Right(R) and one Left(L) move.

The most complicated grids are the ones containing a single wall.
Let's just focus on the grid with a wall in the top left. Starting in the top right, our robot can use the sequence DL to cover all cells. Starting in the bottom left, he can use the sequence RU.
Following this for all four possible grids, we get the following sequences: DL, RU, DR, LU, LD, UR, RD, UL.
One minimal sequence containing all these subsequence is RDLURULDR, our final solution.

mazes we need to solve simultaneously:

its mirror image, both in any rotation.

These are the difficult cases, so all the other configurations (that are solvable in the first place) should be automatically solved if we can get all of these.

So we need a move sequence that has

Is it optimal? No idea. I'm going to need some more coffee if I'm to figure that out.

43
Controlling a robot blindfolded on a 9x9 grid