What is special about this? It's the only example I could find. 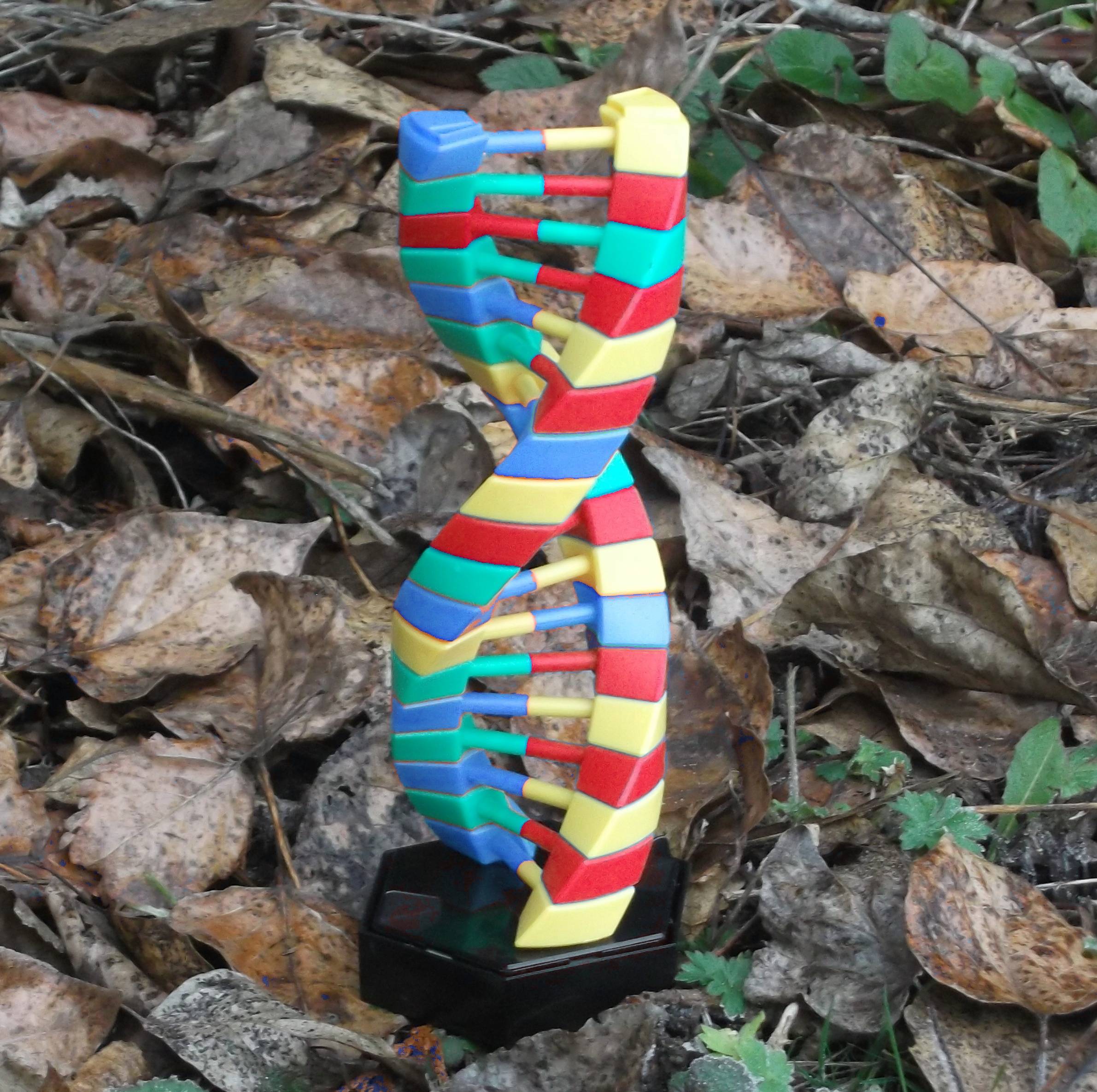 Is it a miniature meal? An old calculating device?

The secret message is

The model appears to be

One of the possible mappings, blue->T, yellow->A, green->C, red->G, allows translating the sequence into the word SLIDER. Not only that, it translates the same forward and backward (5' to 3' and vice versa), making it fully palindromic at the protein level, even though the DNA isn't a perfect palindrome.

The other mappings don't have an obvious translation.

Slider can refer to a small hamburger (miniature meal) or a slide rule (old calculating device), matching the extra clues :)

Not sure if I'm missing the actual puzzle, but this seems to be

a model of a double helix

Wrap-up: The Making Of A Twisted Enigma

I work as a software developer, and specialize in bioinformatics to help HIV/AIDS researchers. A lot of the work involves viral genetic sequences, and converting from nucleotides to amino acids. This summer, I found the boardgame Splice in a thrift shop. I wondered if I could use the letters for amino acids to form some kind of word game, and display it with the game pieces.

Once I had the sequence I wanted, I discovered a couple of problems with my Splice game. First, the helix is left handed, while most DNA molecules are right handed. Luckily, I could fix that easily by flipping the photograph. Harder to fix was the fact that the nucleotide pairs in the game didn't connect the colours according to the standard DRuMS colour scheme. I think it's very strange that they used the standard colours, but didn't pair them correctly. Considering that and the wrong handedness, I would guess that they didn't ask any biologists before they manufactured the game. I briefly considered taking apart the pairs and regluing them, but instead I decided to fix it by adjusting the colours in the photo. With some good advice from Mike O'Shaughnessy, I wrote the swap_colours.py script to swap the blue and red, as well as flip the photo. Hopefully, nobody noticed the photo manipulation, but if you look at the edges of the blue and red sections, you can see it.

I was worried that this puzzle would be too hard, because it required a lot of specialized knowledge: the standard colour scheme for nucleotides and the translation table for amino acids. I made sure that the information was reasonably easy to find on line, but I still thought it was a pretty big ask. I was pleased that several people made some general guesses, and tmpearce solved it within a day.

The detailed things I was looking for in a solution were:

If I'm right it is

We can see it by noting that

the color always match green with red and Blue with yellow. Same as matching aminated acid in DNA

19
Can you solve this logic puzzle in disguise? The color code behind the tomb
18
The markings of Mictal
15
It's all about the journey
37
A Puzzle That Dims a Tornado
13
Mank, oil, pew, or IQ?
14
Twisted Connections
3
A story reminiscent of something
12
The Green Periodic Puzzle
14
What is a Fun Puzzle?