The grandest zoo in Appelhaken

In this zoo there are three food stalls and two exhibits. The Law of Appelhaken specifies that there must be a clearly marked path from each food stall to each exhibit, and that these paths may not intersect or share parts.

A third exhibit is built, so to comply with the Law, the head architect of Appelhaken constructs a bridge within the zoo (not so grand as the Appelhaken Monument Bridge, but still pretty magnificent) and a path is placed on top of it, while another path goes beneath it, for without the bridge, the Law could not be upheld.

How can the Grand Zookeeper reroute the paths of Appelhaken Grand Magnificent Magnificent Grand Grand Zoo in order to preserve the Law?

(TN: The magnificent language of Appelhaken contains only two embellishing adjectives, which I translate as magnificent and grand here. For further embellishment, repetition is necessary.)

The grounds of the zoo, with one bridge,

are kinda-sorta topologically equivalent to the surface of a torus.

So, with sufficient abstraction, the following diagram shows how to do it

where the north and south edges are to be thought of as glued together, and likewise the east and west edges. (Obviously the red blobs are the exhibits and the blue blobs are the food stalls.) 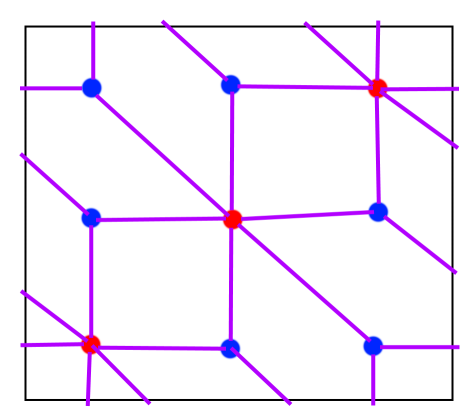 this may not be instantly convincing to those who have not studied topology, not least since this is only a kinda-sorta equivalence (the plane is a sphere minus one point, which is harmless; to turn a sphere into a torus you add a cylindrical handle, whereas we have added a mere strip)

so here is how to transform that into something more obvious. First

we route all the "horizontal" across-the-edges things above the square: 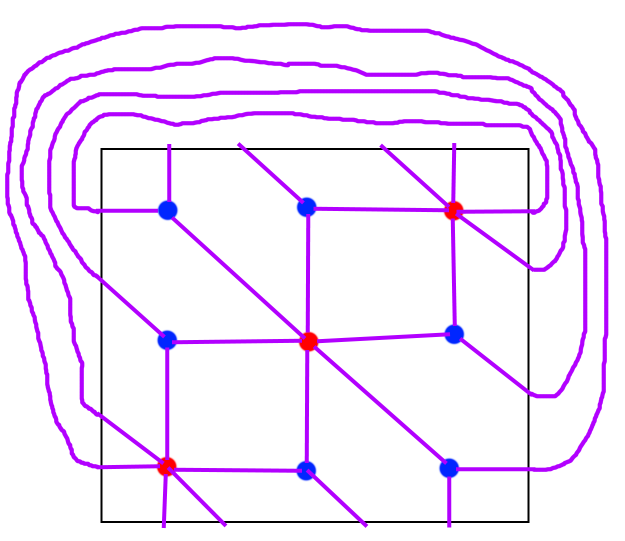 we run the "vertical" across-the-edges things in a single bundle, above those, over the bridge: 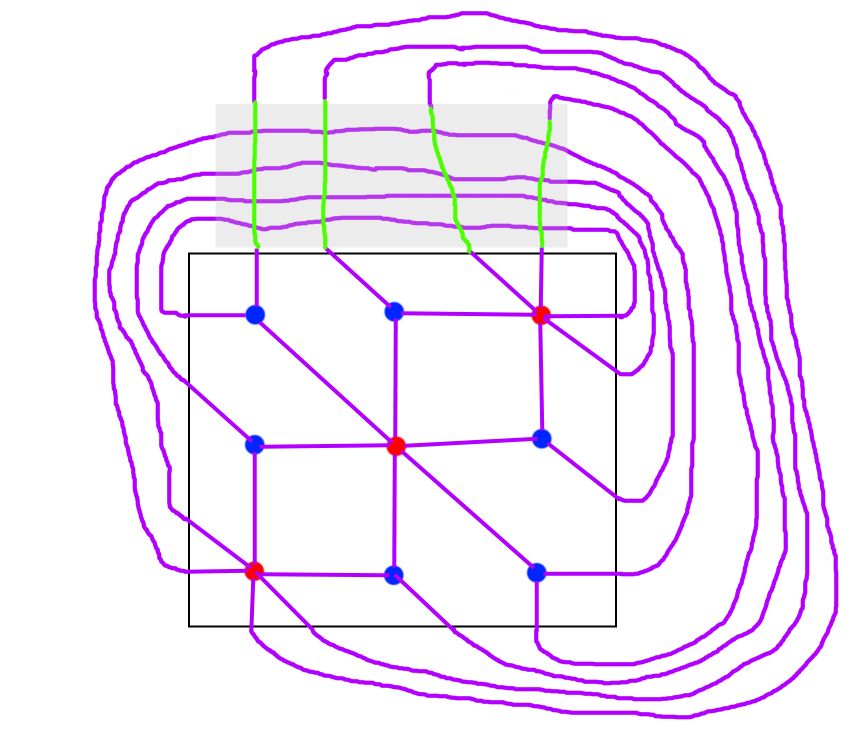 (The bridge is rather wide. Its footprint is the shaded grey rectangle. Green paths are over, purple ones at ground level.)

8
The grandest bridge in Appelhaken

3
Are there any topology puzzles similar to The Seven Bridges of Königsberg?
27
Is there a proof that a map of the United States requires 4 colors?
12
Ernie and the Underground Network
11
Can the idiot's route be less expensive than the genius' route?
10
The three utilities puzzle
9
A Demetri Puzzle
5
The sandpiles on the beach