From the golf course Hercules sped as quickly as possible to Dark Horse Bookmakers, stepping inside as a clock chimed two o’clock. The whole place was buzzing with sound, as a group of ten or so punters watched the final moments of what appeared to be a thrilling race. As the leading horse crossed the line a big cheer went up – it appeared that all of them had won their bets...!

The owner, Diomedes, grinned and welcomed Hercules inside. “I’m afraid if you were hoping to bet on any of the races at Thessaloniki today, you’ve just missed out – that was the twelfth and final race. Windmill just pipped Chilli Sauce to the finish line – exactly as I knew she would...”

Diomedes gave a sneaky chuckle and proceeded round to the cashiers’ area. “So do you want to place a bet, young Hercules? The races at Miletus begin at two-thirty – there’s seven on the racecard there for today – or if you’re quick you could have a shot at the last race of the day at Athens, which starts in eight minutes.”

Hercules retrieved his mother’s betting slip from his pocket and looked down at it. “It’s the Athens race she wants – the two-ten – but...” – Hercules sighed – “...she’s forgotten to write down the name of the horse she wants to bet on.”

Diomedes’ grin grew wider and he beckoned Hercules closer, lowering his voice. “If I tell you the winning horses from the other races at Athens, perhaps you can work it out...” He passed Hercules a sheet of paper with the details of the six races for the day: 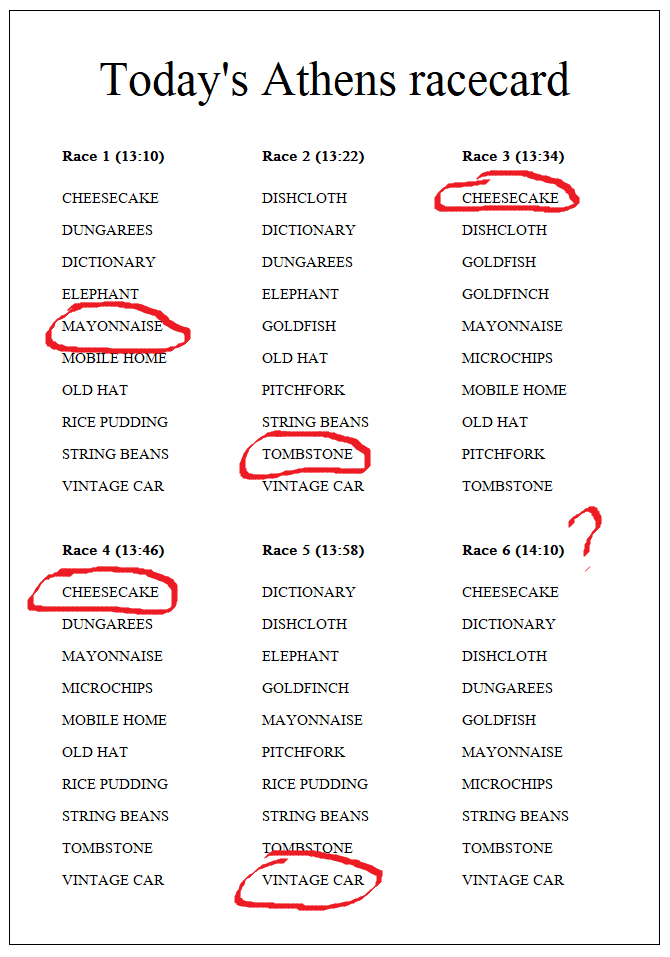 “Okay,” said Hercules, “Cheesecake has won two already, so she’s got form...” He stopped at the sight of Diomedes shaking his head and smiling.

“That’s not how it works,” Diomedes said, lowering his voice still further. “You see, here at Dark Horse we have a little... ‘inside information’ that we can use to our advantage. For any given race on any given racetrack across Greece, we can work out if it has a... er... foregone conclusion, shall we say? There’s a code, see, among the racing circles. If all except two horses in a race meet a certain criterion, that's a sign to us that the race is rigged, and the horse that meets that criterion in a very particular way is the one to put your money on. Now, it just so happens that all of the Athens races today are ‘predictable’ – and I hear you’re a whizz with puzzles, so if you want to get that betting slip of your mother’s submitted you’ve got five minutes to work out who to put your money on...”

TASK: Deduce the Greek betting syndicate’s method for rigging races. Identify the horse that will win the two-ten at Athens.

in each race there are one or more letters occurring in exactly 8 of the 10 horses' names, and furthermore one way of picking them makes the letters spell out ATHENS. (Note that these numbers are consistent with the numbers of races specified in Thessaloniki and Miletus. I could quibble that "Αθήνα" is only five letters but I shan't.) It also happens that in the five races with known winners, the winner's name contains the letter in question. So far, so good. The first two races raised the hope that perhaps the winner was as simple as "the horse whose name has two of the relevant letter" but that isn't consistent with the other known results.

So we have to make sense of the following:

and maybe also the following:

14:00 was the time of the end of that race. (So, metagaming this a bit, if we are supposed to be using this information then it must be the race number rather than its time that actually matters. The Athenian races run exactly every 12 minutes, so as far as those are concerned we get the same information from both.)

letter positions are relevant here, then WINDMILL has I in places 2 and 6, and CHILLI SAUCE has it in places 3 and 6, suggesting that it's the 2 rather than the 3 that's relevant. For that matter, all our Athenian winners seem to have the relevant letter rather early too. But the sequence 2,1,2,3,3 doesn't seem very promising.

Here is one possibility, which is at least consistent with everything we know:

the winner is the horse that has the specified letter earliest in its name.