Checkmate with two knights, but with a twist

It is well known that two knights and a king alone cannot force a checkmate. But that it on a 64-sqaure board.

According to Edward Winter’s C.N. 5449, William Shinkman found a way to give mate in a KNN-K endgame by adding an extra square below e1 (see the diagram on the left.) 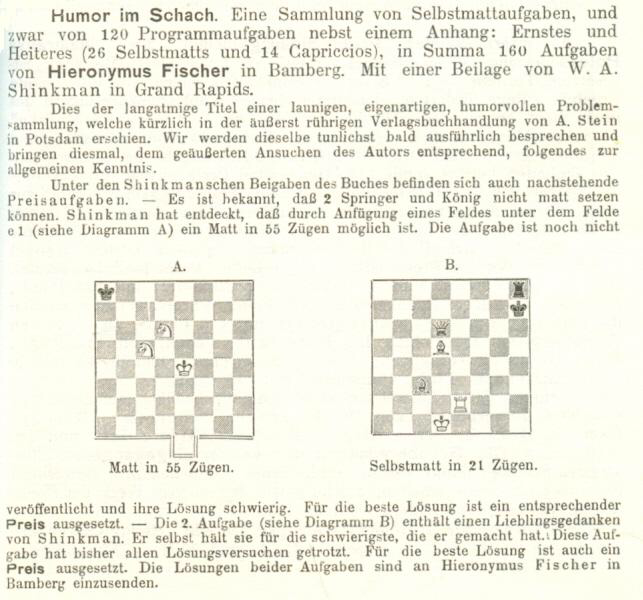 The problem calls for Checkmate In 55 Moves.

Can anyone solve it? I translated some of the German and found no mention of when the solution would be published, so I don’t know where to look.

Computers are allowed. If you find a solution, it does not have to be in 55 moves, as this ancient problem could be incorrect. If there is no solution, give proof as to why.

I found/figured out the solution.

Mate can be forced by white.

Starting with the reference to this problem here:

A few entries down the page, a more illuminating further reference is given:

To give an example of how mate can be forced, consider the following starting position, with White to move. Remember that there is an extra square on e0. 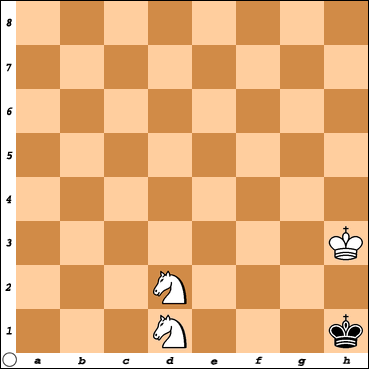 White can mate in 4:

The diagram position doesn't look too hard to reach from an arbitrary starting position, thus allowing mate to be forced from the original position in the question.

I start by excluding mating positions. 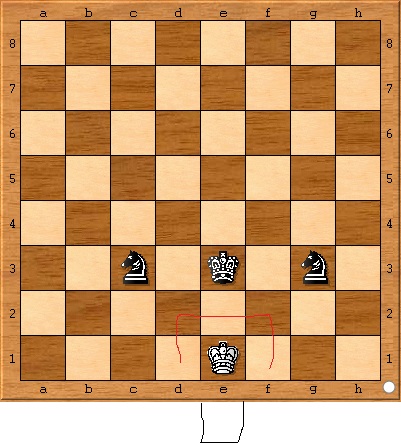 If white King steps to e0 from e1 (from a normal stalemate position) the black king is outside of the red line and once the white king is on e0 there will be no attacking piece to deliver mate. If the position is not the stalemate illustrated above, but with one of the knights attacking, then white king doesn`t need to step on e0, it can go to d1 or f1.

Conclusion: white king should go to e0 from d1 or f1. 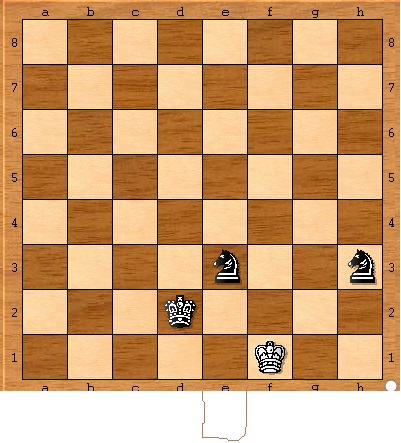 On the second illustration it is already mate on a normal board and we know that this is not achievable with perfect play. (It would be possible if an extra piece, for example a queen on the f1-a6 diagonal would force the king move to f1 (Qf1, Kxf1) then for example Nf5 to Ne3+, Ke0, Nf2#. (But we don`t have any extra piece)

If white king on f1 would be normally stalemated then he goes to e0, but in order to mate him on e0 the next knight jump (whichever knight and wherever the knights are) should attack e0 and f1 simultaneously, but the square d2 (the only possible square to deliver mate from) is occupied by the black king himself.

The king cannot be checkmated on f1 or d1 because the attacker would cover e0, and to cover all the 5 remaining squares surrounding the king the other knight and the black king should be placed on the same square (f3 or d3). In chess only one piece can occupy a given square at any time.

EDIT: I found a line where the king can actually be mated on e0 square.

This is a variant of the previous "second illustration" where there was mate on the board and it was stated that this couldn`t be forced. Of course not on a normal board, but what if the king steps on f1 from e0 ! So the position is achievable on an extended board. Here the line would be 1 ...Kd2 2 Ke0,Nf5 3 Kf1,Ne3+ 4 Ke0,Ng1#.

It is now proved that starting from this position the king can be mated on e0. The next question to answer is whether this position can or cannot be reached from the starting position given in the original article. 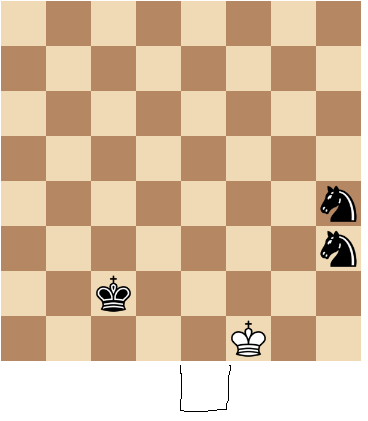 48
Can you stop the rambling rook?
7
Checkmate with Pawn and King
2
8-move checkmate with king
0
Don't Checkmate White!
4
The Dropper, But With A Twist
8
Doubly Pure Checkmate
6
Only kings and horses
10
Interchanging knights and rooks... again!