Suppose a circle (O,R) and a point A within its area having distance r from O (0<=r<=R). Which points X of the circle minimize the angle between the line AX and the tangent on X?

I was pondering on "realistic" (take this with many grains of salt) ways an energy shield could stop incoming projectiles without stopping outcoming ones. So I was led to think of a one-way high air drag setup. The drag would be "outwards"; thus, incoming bullets would hit it dead on and suffer an 100% penalty; but if they hit the shield at an angle, they would only be dragged back by the cos of that angle. The question then becomes, if you are an outward attacker, what is the best angle to attack someone inside.

In the following image, the question is: which are the points X that minimize the angle φ. 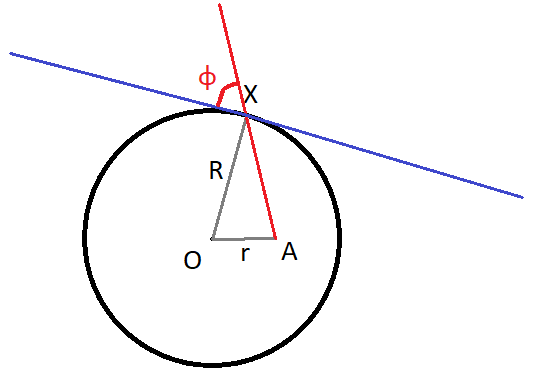 Construct the midpoint between $A$ and $O$, called $E$ in the diagram, and construct the perpendicular bisector through it. Determine a point $Y$ on this line such that $|OY| = \frac{R}{2}$ (there will be at most two such points). Extend the line $OY$ to meet the circle at point $X^*$ such that $Y$ is between $O$ and $X^*$ on the line. This is a point which will minimise the angle $\phi$. There are two such points on the circle (indicated as $X^*$ and $X^{*'}$ in the diagram) if $A$ is inside the circle and does not coincide with the centre. There is just one such point if $A$ is on the circle ($A$ itself) and infinite such points (all of them) if $A$ coincides with the centre. 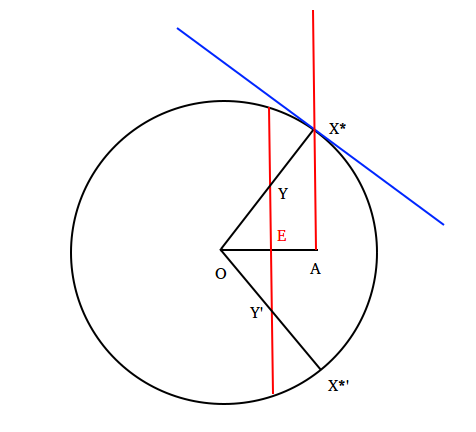 As Jaap and Gareth both discovered, the angle $\angle OAX^*$ must be $\frac{\pi}{2}$ which follows in this instance as $OX^*$ is a diameter of the small circle and $A$ is on the circle but they have found a quicker way to this end.

4
The ultimate conversion of a square into right angle pyramid
7
Unfold a right angle pyramid into a square
9
Black Cavalry Fork Attack
4
An angle between diagonals
4
A geometric puzzle. What is the angle?
9
Survive the infinite zombie attack II
7
Vertices of a regular $13$-gon and $14$-gon on a circle with center angle $< 1°$