Ball-passing game with a surprise ending

You are organizing the following game:

Participants: About 15 players. You are Player 1, and the other 14 players have (preferably) no prior knowledge of the game.

Equipment: A basket containing 5 tennis balls (or easier yet, 5 beanbags). You, Player 1, hold the basket the whole time.

You instruct the players as follows:

“This is a game with no winners or losers, but it has a surprise ending, so I’m not going to tell you everything in advance. Just follow the instructions, and watch what happens. And don’t worry, this is a safe game. Everybody, please stand in a circle of about 20 feet (6 meters) in diameter.”

Within a minute or two, an interesting pattern emerges. What happens, and why?

I was introduced to this game in the late 1990's by a professional game organizer during (I think) a weekend getaway at Omega Institute in New York state. I don't know who invented it, or what it's called. If anybody knows, please add it to the comments, or to your answer, and I will update this puzzle to give credit to the inventor.

Given that it would make everyone's lives easier, I'd guess that:

I'm going to guess that the end state is where:

1. The original circle shrinks to a small circle where everyone is within arms reach of their "prior" and "next" neighbors.

2. The circle is reordered such that each person receives the ball from their right and passes it to the person on their left (or vice versa)

As far as why that happens, if you disregard the ball handoffs and just imagine each person following the person in front of them in the ordering, then it seems inevitable that they will rearrange such that each person gets closest to their "next" person, until the point where everyone is close enough to not have to move any more (which has to be in some kind of circular arrangement given that the order goes 1..15 and back to 1). The ball handoffs just slow down the process since not everyone is moving at the same time.

I believe that the end event will be

One person will have all 5 balls at any given time. This is assuming that, if your partner is in transit to or from the person they are supposed to pass the balls to, you cannot pass a ball to them. This is also assuming that there is no rule against a person accepting multiple balls if they have not left their starting position. Everyone will move at slightly different paces/will have different distances to travel, so small differences in travel time will quickly build up, resulting in a traffic-jam situation.

The players would form a circle formation that rolls around the inside of a larger circle, the original circle. You can test this with this online simulation, where you see each player is moving diametrically across the larger original circle and many players are moving at once.

Similar to other answers, but adding a novel element:

Not only does everyone contract into an arms-length, no-walking circle, but also someone picks up the basket, puts all five balls into it, and that is what is passed around. Quite possibly, everyone ends up just holding it with one hand each in the middle, perhaps shaking it occasionally.

So I made a little simulation for this puzzle here. (The simulation isn't 100% done at the time of this answer but running it several times gives a good guess on what would actually happen)

In the simulation, I did several runs and every time the players end up clustered. It's not always in a circle but they are mostly next to their "target" (the player they are supposed to pass their ball to).

No time to think about it logically, so lets just simulate it! The fascinating part is that this does not converge naturally (other stable patterns are reached) unless several conditions are met:

Started with a more refined approach to perform the operations but chose the obviously correct method instead, apologies for any eye-bleeds.

This chart shows the histogram of convergence times for a 1000 sample run against permutations of 15 people: 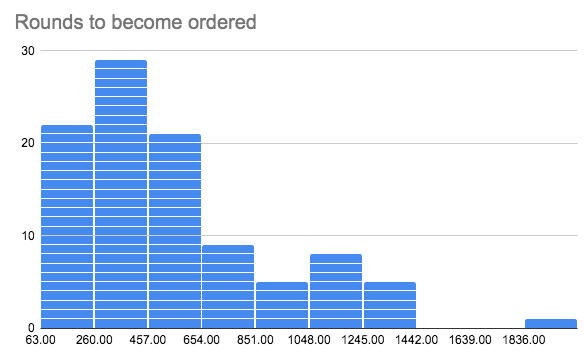 22
The Secret Club (another one?!?)
4
Why did the lady die?
12
Mysterious Murder Mystery - The Four Brothers
5
logic game - how would you solve it?
8
A Bunch of Rocks
5
Through the Looking-Glass
2
Zed's Garden: Nothing But Flowers
5
Predicting the future?
38
“I claim this corner of the world for Britain!” - What game are Alex and Brooke playing?