Hoping for a satisfying conclusion (a musical connect wall)

Hoping for a satisfying conclusion

In this puzzle, the melodies of 16 songs are given in musical form. You first must identify the 16 songs from the melodies. Then, arrange the songs into four groups of four, with each group of songs related by a common theme based on the song titles. Finally, the four themes can be used to determine the final answer, which will explain the title of this puzzle.

These songs cover a variety of genres and decades, and some songs are from musicals or movies.

In your answer, please list the lyrics corresponding to the melody snippet for each song, to help others follow along. 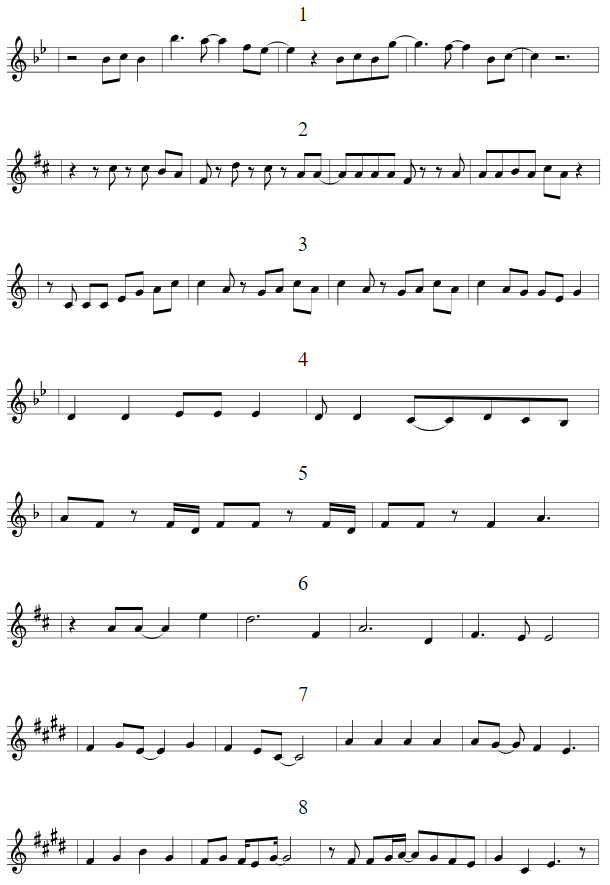 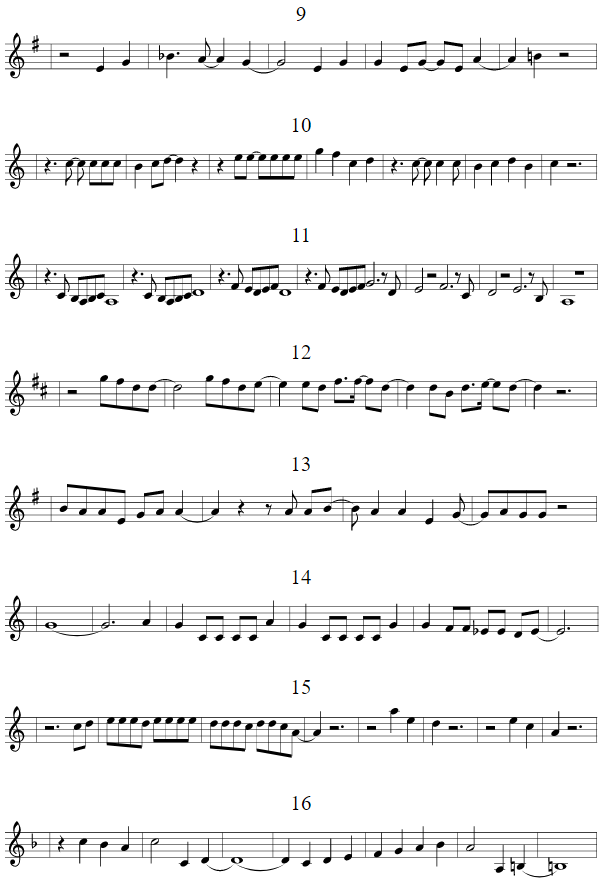 For those of you without access to a piano, here are the songs in ABC notation. If you copy and paste each song (starting with "X:#") to a site which can play ABC music, such as this site which I used to create the music, you can hear the songs. 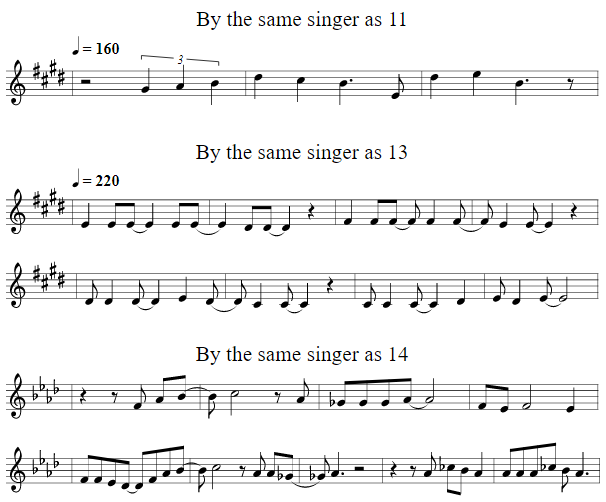 Like @Stiv commented, I don’t know if anyone can get them all alone, so I began by making my contribution and adding to it. Contributors to this answer include myself, Braegh, Stiv, GrumpyLlama59, and Darrel Hoffman.

Rewrite the Stars, from The Greatest Showman

What if we rewrite the stars, Say you were made to be mine

We gonna rock down to Electric Avenue, And then we'll take it higher

Hey now, you're an all-star, get your game on, go play

Just you and I, defying gravity

Lately I been, I been losing sleep, Dreaming 'bout the things that we could be

And if I had the choice, Yeah, I'd always wanna be there, Those were the best days of my life

The Movie in My Mind, from Miss Saigon

The movie in my mind, The dream they leave behind, A scene I can't erase, And in a strong GI's embrace, Flee this life, flee this place

Pictures of You, by The Last Goodnight

Pictures of you, Pictures of me, All upon your wall for the world to see

You must be my lucky star, 'Cause you shine on me wherever you are

I Get Weak, by Belinda Carlisle

Girls on Film, by Duran Duran

Hooray for Hollywood, from Hollywood Hotel

The four groups are:

This implies that the hope for a satisfying conclusion is:

the upcoming Star Wars: Episode IX: The Rise of Skywalker.

This movie will be the ninth film in the series of episodic films and the final of the “sequel trilogy.” The Force is a prominent element of the Star Wars universe.

The hope is that this film will provide a satisfying conclusion to the sequel trilogy, as well as some characters’ story arcs. It’s not exactly a new hope, but it is sorely needed for many fans who have already been disappointed by episodes 7 and 8.

After various conversations in comments, just recording this as a partial, since I managed to identify 6 of the 9 songs that @CGreen was missing in their original answer. See (and upvote) their answer for the complete summary of all users' solutions and the final completed wall solve. A great team effort, this one - the power of group-solve!

'Rewrite the Stars' from The Greatest Showman. This would fit with the STAR group.

'Defying Gravity' from the musical Wicked. This would fit with the FORCE group.

'The Movie in My Mind' from the musical Miss Saigon. This would fit with the CINEMA group.

'Lucky Star' by Madonna. (Another for the STAR group.)

'I Get Weak' by Belinda Carlisle. (Another for the FORCE group.)

'Girls on Film' by Duran Duran. (Another for the CINEMA group.)

Not the answer you're looking for? Browse other questions tagged music connect-wall or ask your own question.

16
Kicking and screaming (a musical connect wall)
5
When designing a tougher Connect Wall, how to provide good entry points and signposting for a solver?

12
Musical Numbers
32
"The Unfinished ________ Waltz"
19
Paraphrased lyrics 2
14
The state of the art in music puzzles
21
What is missing from my aunt's inheritance?
12
Connect Wall: Visual Edition
9
A Gentle Connect Wall
13
An amorphous connect wall
16
Kicking and screaming (a musical connect wall)
2
Some of All Parts