This puzzle is part of the ‘Twelve Labours’ series. Previous instalments can be found here: Prologue | 01 | 02 | 03

Now one crate lighter, Hercules made his way back up the road to the Erymanthian Bar. Outside, a chalkboard proclaimed the sporting fixtures for the coming week that would be shown live on television. Football, tennis, athletics, rugby... All the weekend’s horse racing too. Hercules smiled to himself – the owner, Pholus, was an old friend of the family, and completely mad about all things sports... especially when it came to horses.

“Of course, I used to jockey all over the country when I was younger – before the accident, I mean...” Pholus chatted away amicably, as Hercules unloaded his trolley. For once, Hercules did not begrudge the task he had been set – helping out Pholus (who always managed to remain cheerful despite his crutches) seemed like a good thing to do. “These days I’m lucky if I can manage a hole or two at the golf course up the road. But I’m happy, you know – I run a sports bar, I’ve got good, strong wine, and plenty of custom; really, I couldn’t ask for any more. I’m over the moon.”

Pholus gestured around his establishment, and Hercules had to agree it was truly a wonderful sight. Every wall was covered in sporting paraphernalia – scarves, signed photographs, souvenir programmes, banners... At the end of the bar was the dartboard where Hercules had scored his first ever one-eighty maximum; beyond that stood the table football, at which Hercules’ father had regularly contrived to lose to his young son; and just beyond that stood the snooker table that conjured up memories of the sound of chalk, the feel of a cue sticky with stale beer, and the smell of cigarette smoke that always seemed so illicit.

“Oh, let me help you set that up,” said Hercules, spotting the messy snooker balls. But on approaching the table, he stopped short. The green felt was covered in letters. Hercules laughed and shook his head – clearly, even his friend Pholus had sided with his mother and was testing him today! 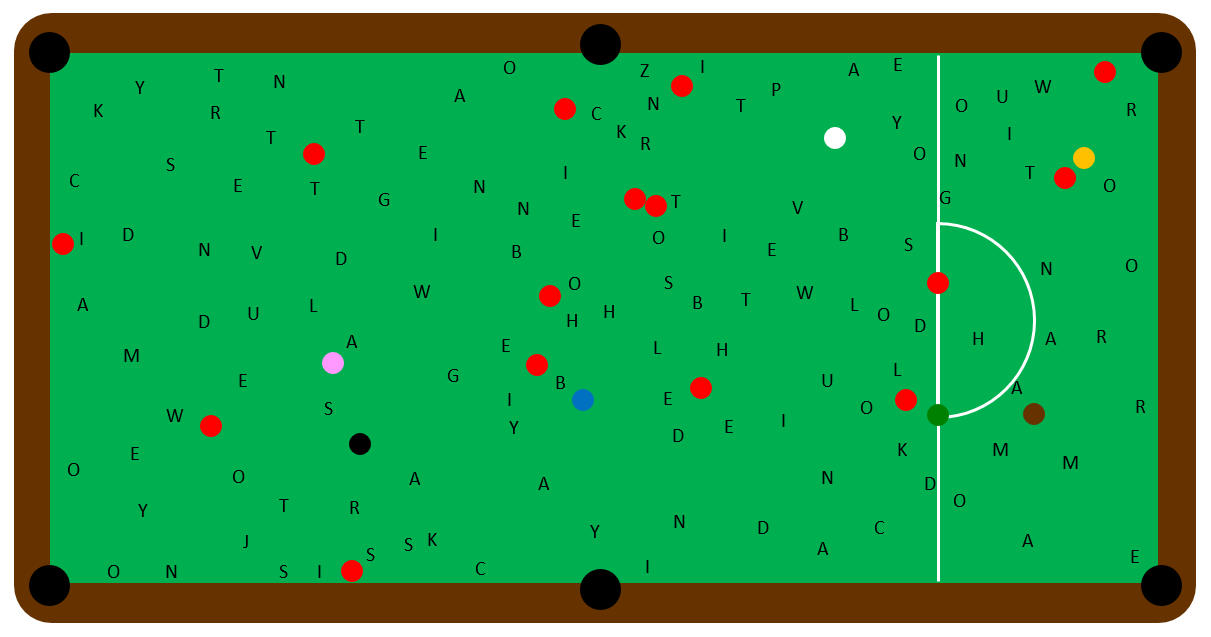 “What does my mum need from you?” Hercules sighed, one eyebrow raised. Pholus laughed.

“Just something for the house. It’s a bit heavy though – I recommend you keep hold of that flatbed trolley...” Pholus handed Hercules a cue. “You’ve got one shot to work it out – it has to be a legal one, of course.”

TASK: Find the legal shot which will help Hercules deduce the item in Pholus’ possession. To be awarded the green checkmark, a complete answer must include an explanatory diagram.

The solution requires only one ball to be hit head-on by the cue ball (no tricky angles of impact). Once hit, the target ball does not touch any other ball on the table on its way to a pocket (although at one point it looks like it comes really really close to one...). It may help to assume a 'point mass' when drawing the balls' bounce...

As has already been discovered, a hidden message in the puzzle reads "YOU WON'T SOLVE THIS BY SHOOTING DIRECT." In fact, balls involved in the correct shot will hit the cushions 4 times in total. It is important to note that a ball hitting a cushion will always move away from it at a particular calculable angle - think symmetry...

The answer you seek is a 9-letter compound word. One letter appears within it 3 times; the others are all unique. There are no leading articles.

The same image is reproduced below in greyscale, for puzzlers with colour-blindness. The white cue ball is a numberless grey ring; each colour ball is a grey ring marked with its points value; each red ball is a fully shaded grey circle: 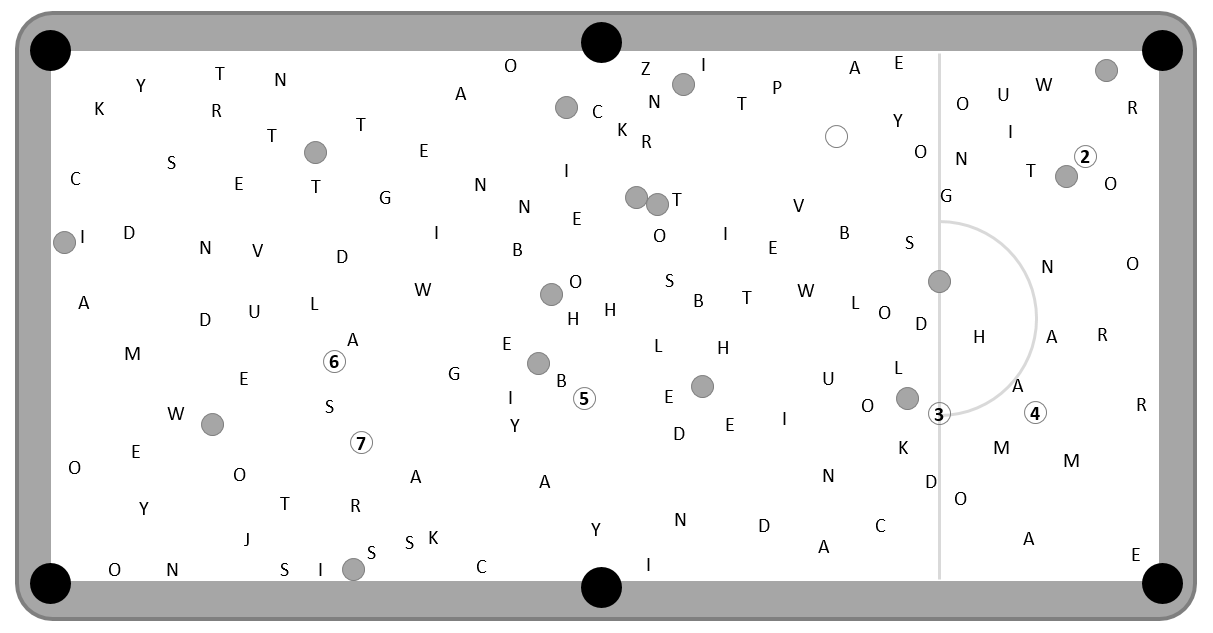 The diagram below shows the path of the shot. The diagram is made from flipping and inverting the snooker table at boundaries such that all paths would be straight lines. 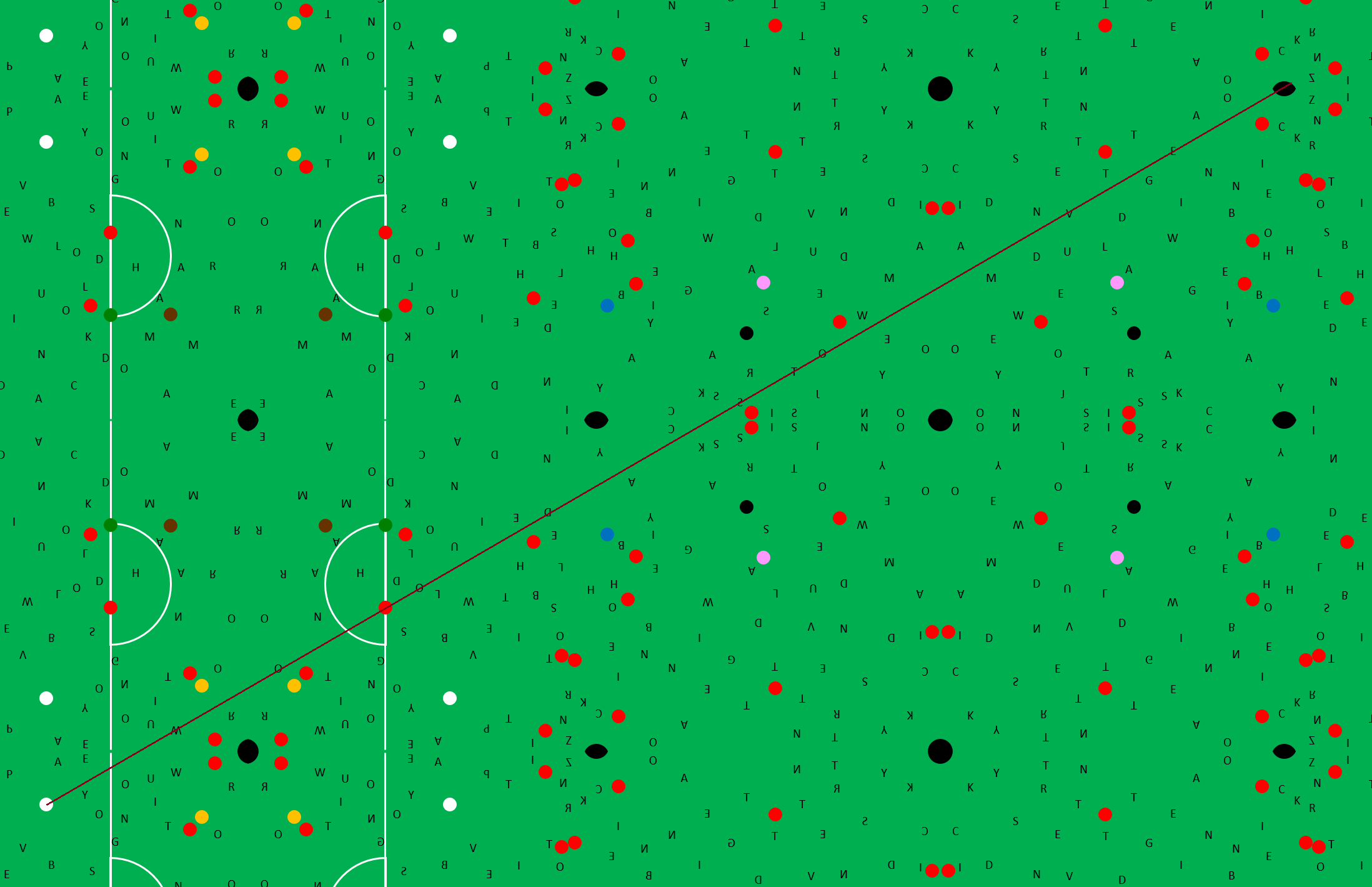 Here is the path on the table by itself

With the correct shot 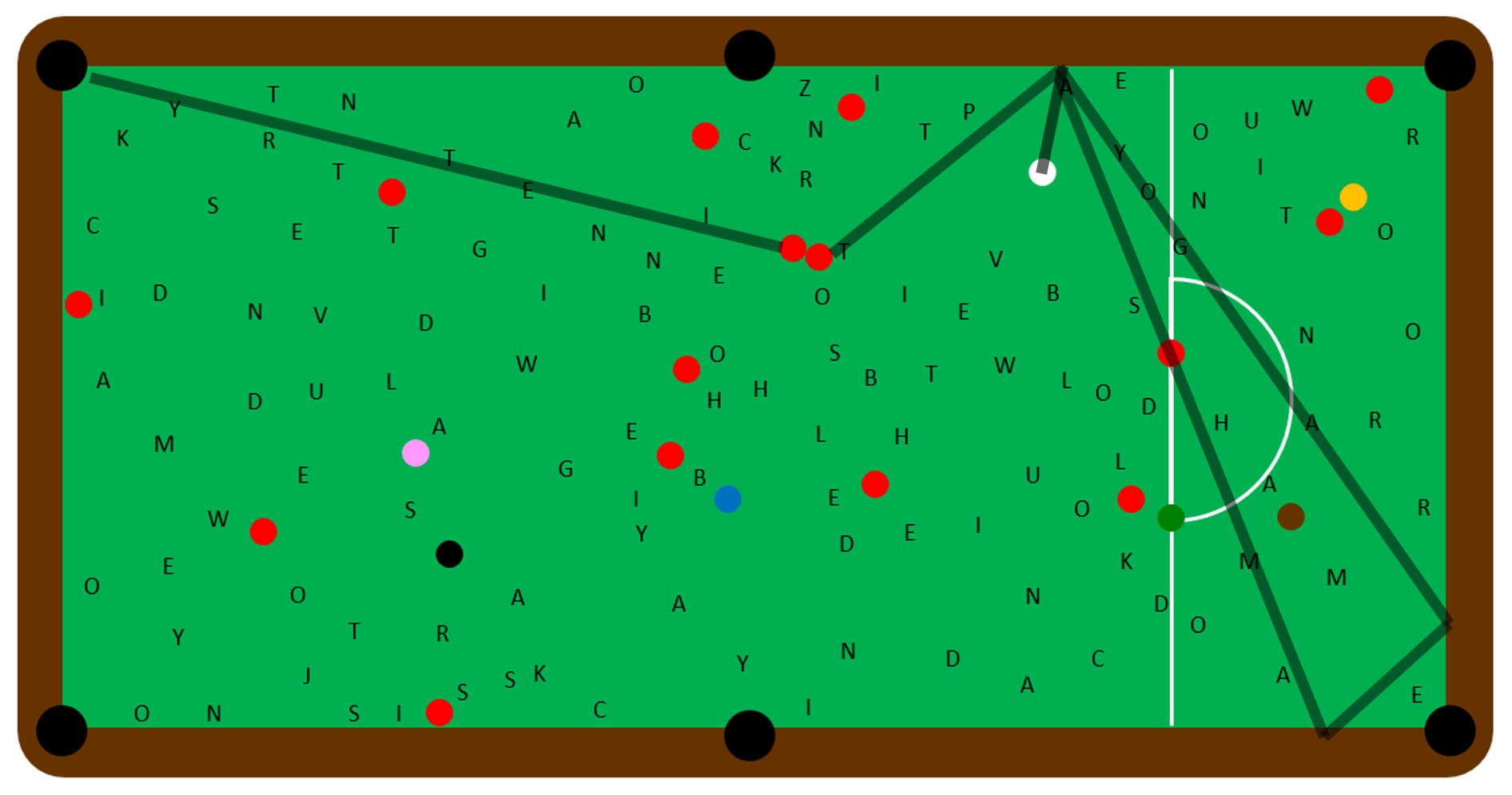 Oh, a quick note about part of the shot:

And here are some wrong answers:

As mentioned in the comments, the red balls in clockwise order read YOU WONT SOLVE THIS BY SHOOTING DIRECT: 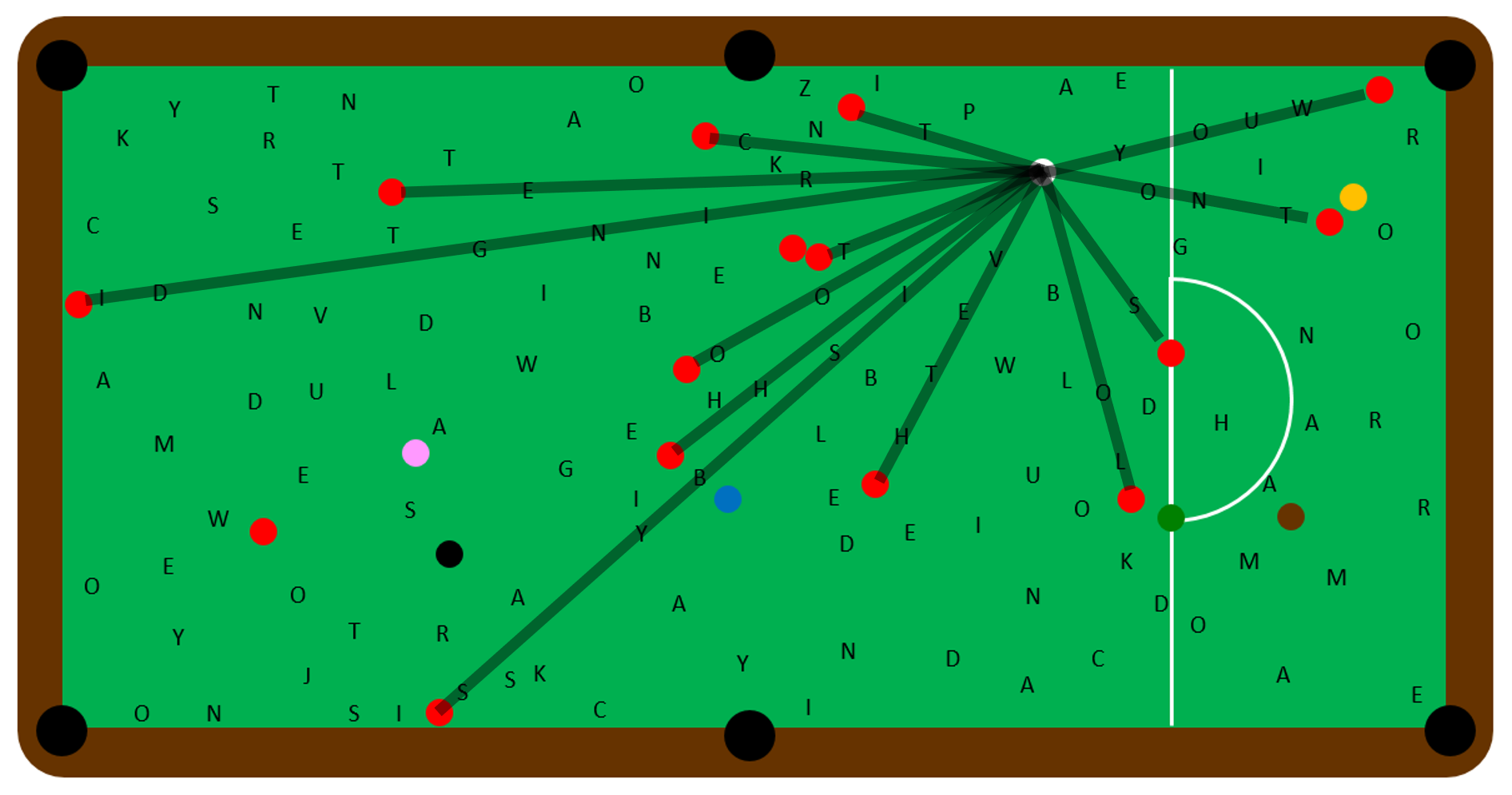 And I found a few more: PINK IN WAY, BLOCK, BLACK SUNK, SHAME, and WIDE: 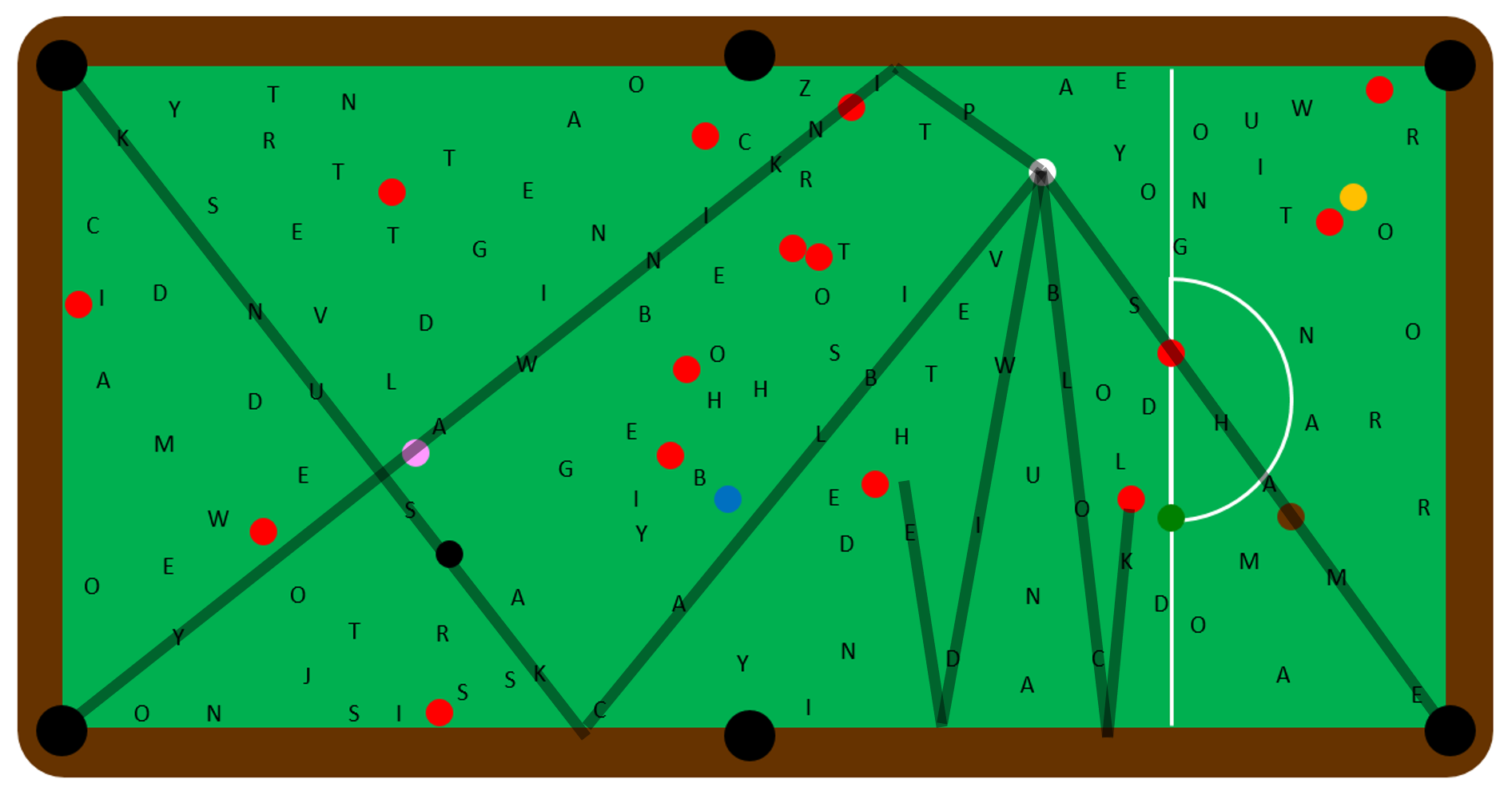 If anyone has more, I'm happy to add them!

Not the answer you're looking for? Browse other questions tagged word visual geometry sports or ask your own question.