This puzzle is part of the ‘Twelve Labours’ series. Previous instalments can be found here: Prologue | 01

His first labour now complete, Hercules made his way up the street to the storage depot for Lernaean Hydration, a wholesaler of alcoholic drinks. The owner, Minos, met him on the threshold with a sigh of relief.

“Thanks so much, Hercules,” Minos gushed, clearly very grateful. “We’ve had a big shipment for the local bars and pubs, but my assistant, Theseus, has called in sick. He normally deals with the distribution, so I really appreciate your mother’s offer for you to deliver a few crates around the neighbourhood for me. In return I said she could have the free gift that comes with the crate of wine.”

“Okay, no problem I guess,” said Hercules, inwardly cursing his mother and her willingness to volunteer his services without consulting him first. “So what’s the free gift?”

Hercules followed his gaze. Forty-nine bottles stood arranged in a square on the table. Looking at the bottle caps from above, Hercules could see that each of them had a letter of the alphabet printed upon it. 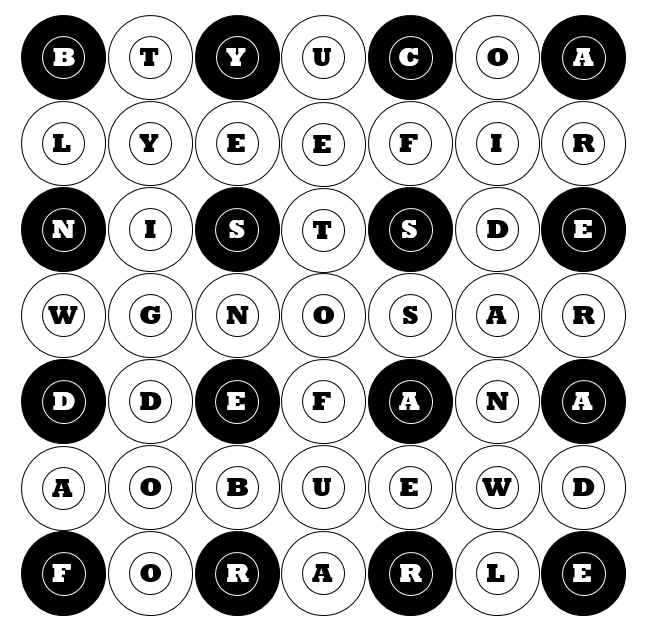 “Originally,” continued Minos, “the bottle caps spelled out a promotional message from the wine merchants, Dionysus. If you can reconstruct it, that will help. You can do it in fewer than ten moves.”

Hercules frowned. “What do you mean, ‘moves’?”

“You’ll work it out. Oh, and you’ll need this.” Minos handed Hercules a bottle with a white cap labelled with an ‘X’. “But I’ll want it back at the end...”

TASK: Deduce how to reconstruct the promotional bottle-cap message. Identify the item which has been promised to Hercules' mother.

As Mariia mentioned in her answer above, this is indeed

based on the board game Labyrinth.

the message starts with "BUY A CRATE", we can make progress: The top row must gain a U, an A, and an R. None of those are very close to the positions they should be going to, so we can assume for now that they are all pushed in from the top.

Pushing the columns down the necessary amounts reveals more of the message: 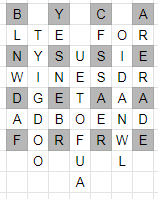 Now, some logic and educated guesses help narrow down the moves:

The first column is likely only pushed once, when we have a U in-hand. We also need to push the second column twice. The rows are a bit harder: the first row needs to go one left, and the third must go left.
Another important question: What can the fixed D form? It seems likely to be the word "AND", to make "...and get". But where can the N come from? It must be the N from the third open column. So we'll need to push [third column up] [second row right] [third column down], at some point.

That makes eight moves to satisfy all the rows and columns - these are likely the only moves necessary, since a ninth move would need a tenth to offset it back. 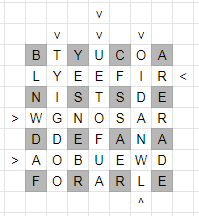 Based on the message fragments, we can determine which letters we'll need for all the column pushes, as well as the top-right push. 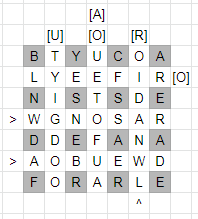 Continuing on like this, all moves are forced to go in one specific place, until the solution is reached: 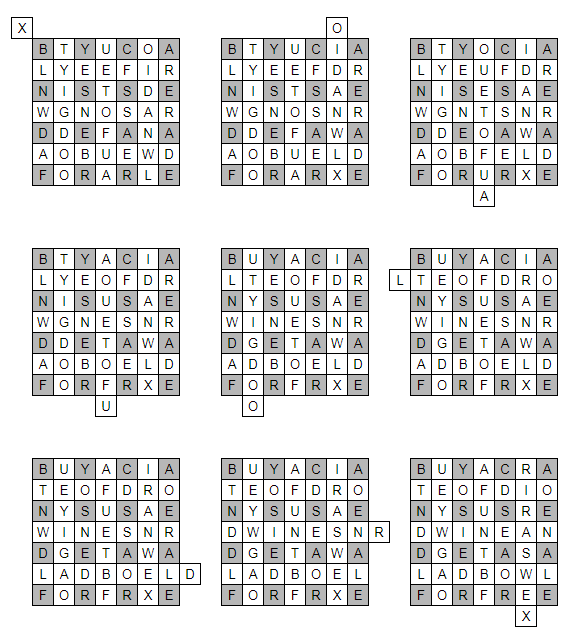 Apparently, you can buy a crate of Dionysus' red wine and get a SALAD BOWL for free!

I think this is based on the mechanics for the board game Labyrinth, in which players rearrange the tiles of the labyrinth by shifting rows and columns. Black caps don't move, and white caps mark the rows/columns that can be shifted by appending the spare bottle (X to start with) to one side and using it to push the row/column to the other side.
I believe the message starts with "Buy a crate", has "Dionysus" in the end of the second (white) row and the beginning of the third row and ends with "free" (based on letters "B*Y*C*A", "N*S*S" and "*R*E", respectively).
For a more educated guess, "Buy a crate of Dionysus red wine and get a SALAD BOWL for free" - this seems to fit all the black caps (and be an anagram of the given letters).

Alas, it takes more labor to dig deeper into this beautiful puzzle than I can do in the next 6 hours, and by that time some hero will certainly behead it :-)

Not the answer you're looking for? Browse other questions tagged enigmatic-puzzle grid-deduction board-games or ask your own question.