This puzzle is part of the ‘Twelve Labours’ series. Previous instalments can be found here: Prologue

Having finally deciphered his mother’s map, Hercules got dressed, wolfed down some breakfast and headed across the road to Nemean Iron, the dry cleaners. As he opened the door, a bell tinkled and a few seconds later the tiny, aged proprietor limped forward to the counter.

“Well, well... I swear you’ve grown since the last holidays, young Hercules,” chuckled Molorchos, a wrinkled prune of a man dressed almost entirely in wool. His eyes twinkled behind thick spectacles and Hercules smiled back.

“You’re sure it’s not you that’s shrunk?!” Hercules joked back. It was the same banter they exchanged every time they saw each other, and it still made both of them laugh despite its many (many) retellings.

“Still got that cheeky wit, I see,” said Molorchos. “Typical Libra. Have you read your horoscope for today? It’s a good one – the stars always have the answers...”

Molorchos slid a sheet of paper across the counter to Hercules. It appeared to have been cut out of a newspaper.

“No, thank you, Molorchos. I don’t believe in that,” said Hercules as politely as possible, sliding it back. “Anyway, Mum sent me on an errand – apparently she sent an item here to be cleaned and it’s ready for collection?”

“Oh yes!” said Molorchos. “A very strange item it was too… But I’m afraid that she gave me strict instructions not to pass it on to you until you’d solved a little puzzle of my own devising and could tell me exactly what that item is...” Hercules sighed. He had been worried about this.

Molorchos said nothing straightaway, but merely stabbed the page of horoscopes with his finger and slid it in front of Hercules again.

“The stars always have the answers...”

TASK: From Molorchos’ page of horoscopes (below), deduce the ‘very strange’ item of clothing Hercules is expected to collect. 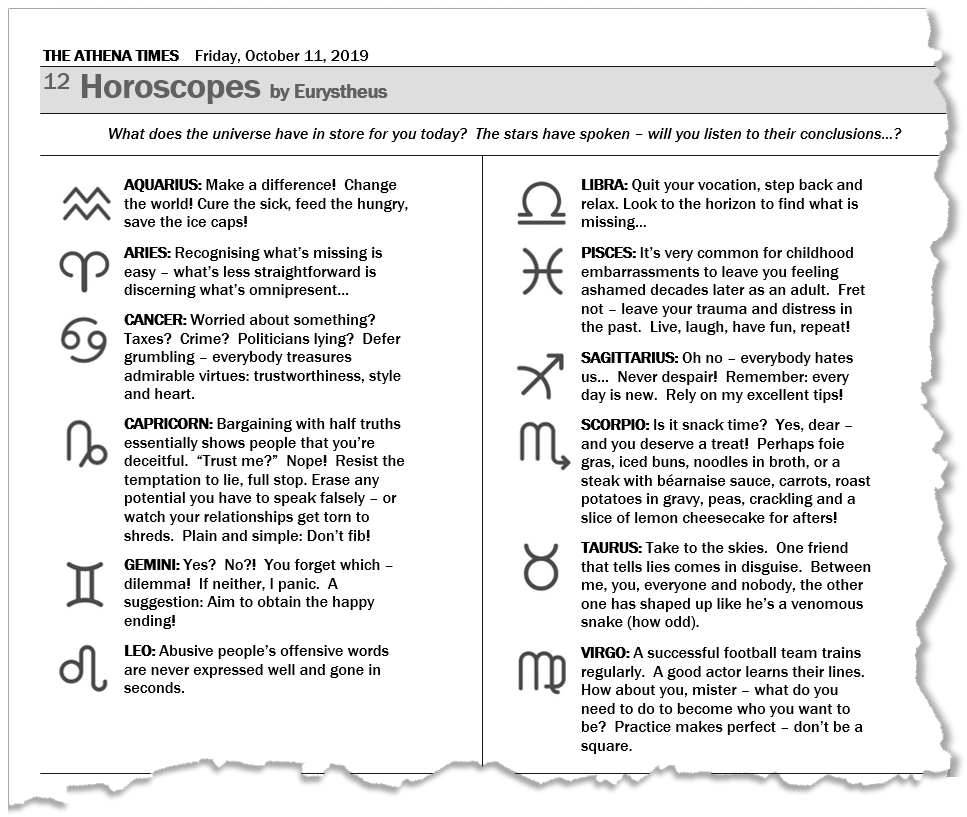 The top line gives a hint for what to do:

"Will you listen to their conclusions?" The last word in each line tells you how to extract a message from the rest of it.

The answers to each clue:

Rearranging the answers to each clue

by the standard order of the zodiac signs gives the answer: STRAITJACKET.

Not the answer you're looking for? Browse other questions tagged word enigmatic-puzzle or ask your own question.