Welcome to the very first puzzle in a new series! It's all about (hopefully) exploring new ways of creating puzzles, as densely as possible. 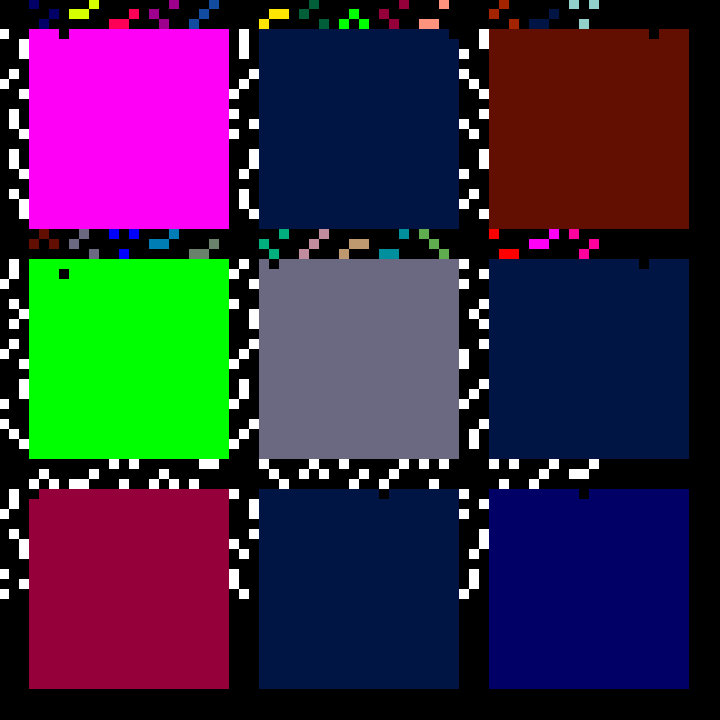 Deusovi managed to jump a step and solve the cryptic clues, so I'll nudge in the direction of solving the first step, which won't help much, but should clear some information. The A-Z interpretation is on the right track, but is making the assumption that the first triplet is 'A'...

The black pixels in each large coloured square don't represent individual letters, but rather, something to be done to the letter for each square

The dots in between the squares...

These can be interpreted

as cryptic clues. Each leads to a three-letter word: BOA(-t), _URN_, NET<, _BUN_, OR+E, ANT*. And these words are a word square, with the words placed in the locations of their clues.

There are also some other ways to extract similar arrangements of letters:

The nine large squares each have the same color as exactly one of the colored triplets of pixels. We can either extract the letter from that triplet, or assign the triplets A-Z (since there are 26 of them).

The nine large squares also each are missing a pixel - this is always one of the first 26 pixels. So this gives another 3x3 square of letters.

The next step needed heavy hinting for me to find it:

If you use the gap position to Caesar-shift the letters from the word square, you get FIRSTDORD. This is likely a reference to "Dord", a fake dictionary word accidentally added when a note asking to add "D or d" to mean density was misinterpreted. So the answer phrase may just be FIRST DENSITY?

Unused information [hinted to be a clue to the step I did first]:

It seems pretty clear that this is the data that needs to be extracted - I'm just not sure how to get an actual answer out of it.

The only remaining information in the puzzle is the particular colors used. They don't seem to be notable in any way - some are fully saturated, some not, and the RGB values used don't seem to have any particular pattern.

Of the second and third squares (both using the colors), only one is probably intended. I'm not sure which, though - both look equally plausible as letter sets.

It's strange that one color is repeated three times - this makes me think that the "color triplet position" rather than "color triplet decoded" 3x3 is intended (because there were multiple other A's that could have been chosen from the decoded text).

I've used all the tags, except possibly steganography and anagram (depending on how you interpret those - do the color matching or the anagram in the cryptic clue count?).

Other uses of steganography: There are no slightly-off-color pixels - all the large regions really are a single color each.
Other uses of anagram: I've tried anagramming all four of the squares I found - nothing interesting appears. I've also tried anagramming the letters in the same position in each square, and again, nothing.

21
Density™ finally back from holiday!
17
Elementary, my dear Louis
17
Rosetta's Stone
6
Emblem gestures
11
The sign unseen
5
Three is the key
11
LongEst in anothEr way?
10
A man, a plan, a canal
8
Density type puzzle 7
12
Density-type puzzle: Is This Too Difficult?
See more linked questions

34
Binary cryptogram from a friend
45
Lepidopterology needed!
73
Miniature Puzzle
25
12 hidden clues in just one paragraph!
21
Density™ finally back from holiday!
14
Density™ 3 - The Game!
8
Density™ 4... Will there be more?
12
AnaCross: A crossword made of anagrams