This puzzle serves to introduce the ‘Twelve Labours’ series of puzzles. Its solution is standalone and does not contribute to the meta-puzzle at the series end.

Hercules groaned as his mother stomped into his room and flung open the shutters to let in the daylight. Rubbing his eyes, he sat up and yawned.

Stretching his arms out and yawning yet again, Hercules shook his head, stood up and shuffled towards the bathroom. This was always the usual pattern of his summer holidays when home from university – woken at the crack of dawn and expected to labour all day. He often wondered whether his mother genuinely believed that naming him ‘Hercules’ had bestowed upon him the physical strength of his namesake, such was the amount she expected of him each day.

Splashing cold water on his face to try and wake himself up, Hercules spotted a sheet of paper taped to the mirror. On it was written a list of twelve tasks:

Hercules sighed heavily – this was going to take him all day. What’s more, the names of many of the businesses were unfamiliar to him...

“Mum,” he called. “Where even are some of these places?!”

“Turn over the paper – I drew you a map,” came the efficient response.

Sure enough, on the other side of the list was a crudely drawn map of their Athens neighbourhood with several buildings shaded in orange. However...

“None of the buildings have names?!”

“Of course not – that would be much too easy,” smiled his mother. “Read the instructions around the edge.”

Hercules sighed again. He had forgotten how much his mother enjoyed testing his mental agility. He had a horrible suspicion that each of today’s labours would be made more complex than was really necessary...

TASK: Use the map and instructions below to identify the 12 labelled business premises (in orange). Then identify which house (in white) belongs to Hercules’ family.

Note the logical-deduction tag - the solution can be deduced without resorting to guesswork. A complete answer is expected to explain the logical steps required to reach an answer. 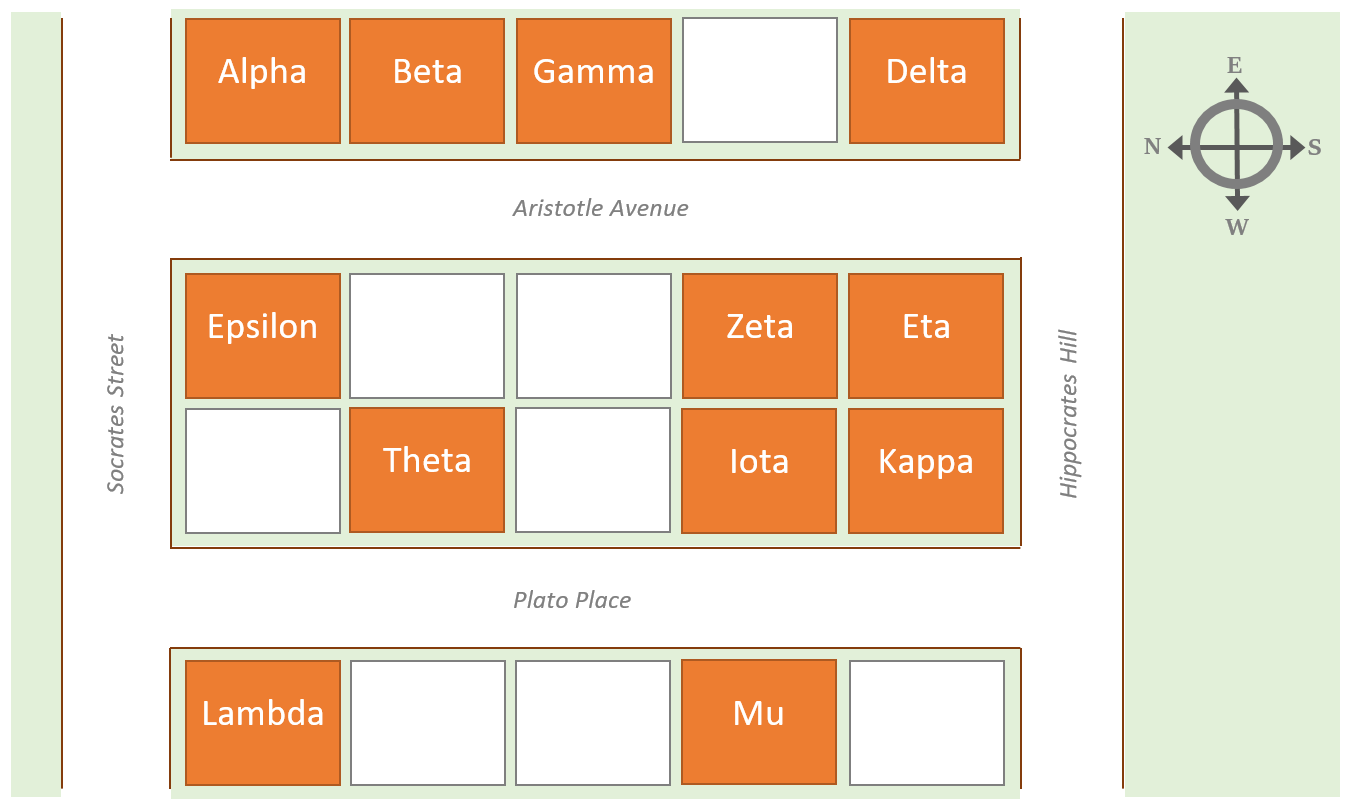 Clarifications (if in doubt):
1 All buildings shaded orange are business premises. All buildings shaded white are houses. A building is either a business premises or a house (never both).
2 ‘Adjacent’ buildings share a wall boundary and are immediate neighbours either horizontally or vertically, not diagonally (e.g. Zeta and Eta are adjacent as they share a wall boundary; Zeta and Kappa are not adjacent as they meet only at a corner). Buildings with a road in between cannot be considered adjacent.
3 A ‘row’ is a horizontal line of 5 buildings stretching between Socrates Street and Hippocrates Hill.
4 A building is ‘on’ a road if one of its walls is adjacent to that road (e.g. Alpha is on both Socrates Street and Aristotle Avenue; Beta is only on Aristotle Avenue).
5 The ‘starting initial’ of a business, symbol or street is the first letter in its name.
6 For the purposes of this puzzle, only ‘Beta’, ‘Zeta’, ‘Eta’ and ‘Theta’ are considered to rhyme with each other. ‘Gamma’ and ‘Lambda’ do not rhyme, no matter how much you want them to... 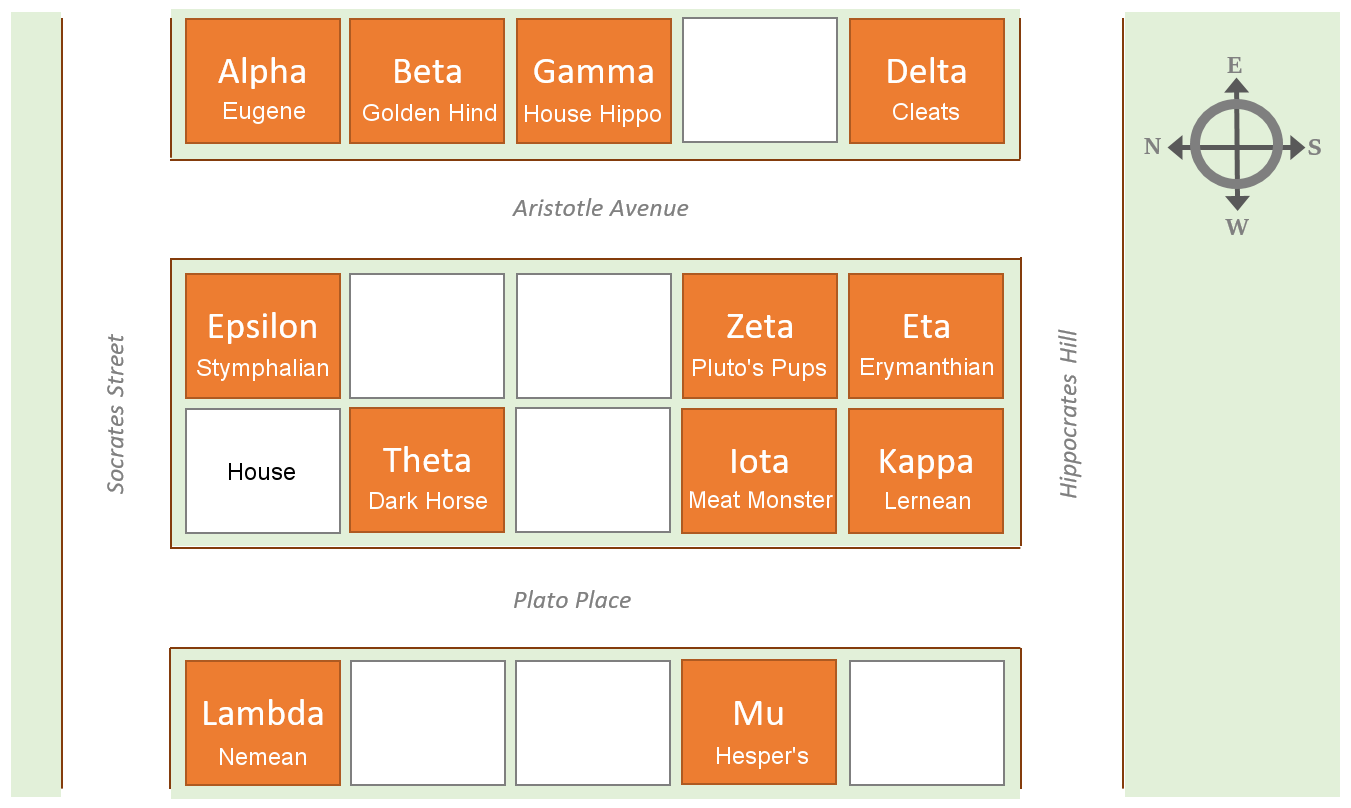 1. Rules 5 and 8 make Stymphalian Beards and Dark Horse Bookmakers as a pair be Epsilon and Theta.

2. Rule 6 makes Eugene's Tables be Alpha, since Epsilon is already filled from step 1.

4. Rule 9 says that 3 times in the path, the next location is directly across the street. One of these times is from the house to Nemean Irons. The other two must occur in Alpha-Epsilon, Iota-Mu, or Delta-Eta. Using rule 12, assume that Mu is Pluto's Pups, which implies that Monster Meat is Delta or Eta. In order for two of the three to be consecutive locations, two of these must be true: Epsilon is Stymphalion, Iota is Hesper's, or Delta/Eta is either House of Hippolyta or Hesper's. However, Iota cannot be Hesper's (which is not adjacent to other's businesses). The two other conditions can't simultaneously be true because both require businesses with the same starting initial as their street, which rule 4 limits to one. Therefore, we have learned that Mu is not Pluto's Pups and Monster Meat is not in Delta or Eta.

5. Continuing to look for ways to satisfy rule 9, only Eugene-Stymphalion and one or two of House-Meat-Hester-Pluto could work (I abbreviate House of Hippolyta as House, not to be confused with Hercules' house). But we know from step 4 that Monster Meat can not be in Delta-Eta. Neither can Pluto because it is north of Cleats. This means that Delta-Eta can not be used. This makes Stymphalian Beards be Epsilon and Dark Horse Bookmakers be Theta. It also makes Iota-Mu one of House-Meat, Meat-Hester, or Hester-Pluto.

6. Since Stymphalian is on Socrates Street, Pluto can't be Iota or Mu (both on Plato street). This leaves only House-Meat and Meat-Hester as possibilities for Iota-Mu. Iota can't be Hester (has neighbor) or House (has business due west), so Meat Monster must be Iota.

7. If Mu is House, then Hesper (no neighbors) has no place to go because the only no-neighbor locations are ruled out: Lamba (two in the same row start with H) and Delta (street starts with same initial). Therefore, Hesper's Hypermarket is Mu. House is now either Gamma or Kappa.

8. There is not yet a business with the same starting initial as the location, and the only choices are Lernean-Lambda and Erymanthian-Eta. It can be shown that putting Lernean in Lambda leads to a contradiction, because that would make Nemean be Kappa, House be Gamma, and Erymanthian be Zeta, leaving Delta and Eta to be Pluto and Cleats, but Pluto is north of Cleats so it doesn't work. Therefore Erymanthian Bar must be Eta.

9. Lernean can now only be in Kappa or Delta since it is at the end of a row. But putting it in Delta leads to a contradiction because Nemean becomes Zeta, forcing Pluto and Cleats to be Gamma and Kappa, but that leaves House nowhere to go. So Lernean must be in Kappa. This puts Nemean in Lambda and the house across from Lambda.

10. House of Hippolyta must now be in Gamma, Pluto's Pups in Zeta, and Cleats N Balls in Delta.

First off, this is a great puzzle. I really liked spending time on it.

I think it's best to start this problem by finding all possibilities. I also abbreviated each business name.

"...Lernaean Hydration is at the end of our row." Each row has a potential house, but not all rows have businesses at the ends of those rows. LH must be at the end of a row, so LH is Delta, Eta, or Kappa.

"The symbols for Golden Hind and Erymanthian Bar rhyme with each other but are not adjacent to each other." GH and EB are a combination of Beta, Zeta, Eta, and Theta, but NOT Zeta and Eta.

"Eugene’s Tables stands on the corner of Aristotle Avenue and Socrates Street." Two options. ET is Alpha or Epsilon.

"Hesper’s Hypermarket is not adjacent to any other business.". HH is Delta, Epsilon, Theta, Lambda, or Mu.

"Stymphalian Beards and Dark Horse Bookmakers have two adjacent neighbours in common." For SB and DHB to share adjacent neighbors, they must be rows 2/3 and be diagonal from each other. SB and DHB are Epsilon/Theta, Zeta/Kappa, or Eta/Iota.

"There are no businesses due west of House of Hippolyta." HOH is Lambda, Theta, Gamma, Mu, or Kappa.


This is the potential locations of all businesses from first analysis:

Next up is all conditionals.

Each setup has to meet all specifications.

"In any given row, each business has a different starting initial." ET/EB and HH/HOH can't be in the same row.

SB is not Zeta, Eta, Iota, or Kappa. If it were, Rule 5 would be violated. This confirms that SB and DHB are the Epsilon/Theta combination.

Since SB and DHB have confirmed locations, ET, HH, NI, GH, EB, HOH, HH, and PP can't be in Epsilon or Theta.

With Theta occupied, Beta is occupied by either GH or EB to ensure Rule 2 (not adjacent) is true.

Epsilon is occupied. ET must be Alpha.

Give me a bit to continue this. I want to make sure everything I've written is correct.

Delta and Epsilon are adjacent items on the list. Delta can only be CNB. Epsilon can only be SB/DHB.

"This confirms that SB and DHB are the Epsilon/Theta combination."