How did these grassy hillsides become unevenly terraced? [closed]

In Colombia, many grassy hillsides are unevenly terraced, like in the photo below. How did this happen?

This terracing can also occur on hillsides that never had these palm trees on them. It probably also occurs outside of Colombia, under the right conditions.

I think I know the answer, just from observing and thinking about what could and could not be happening on these hillsides. 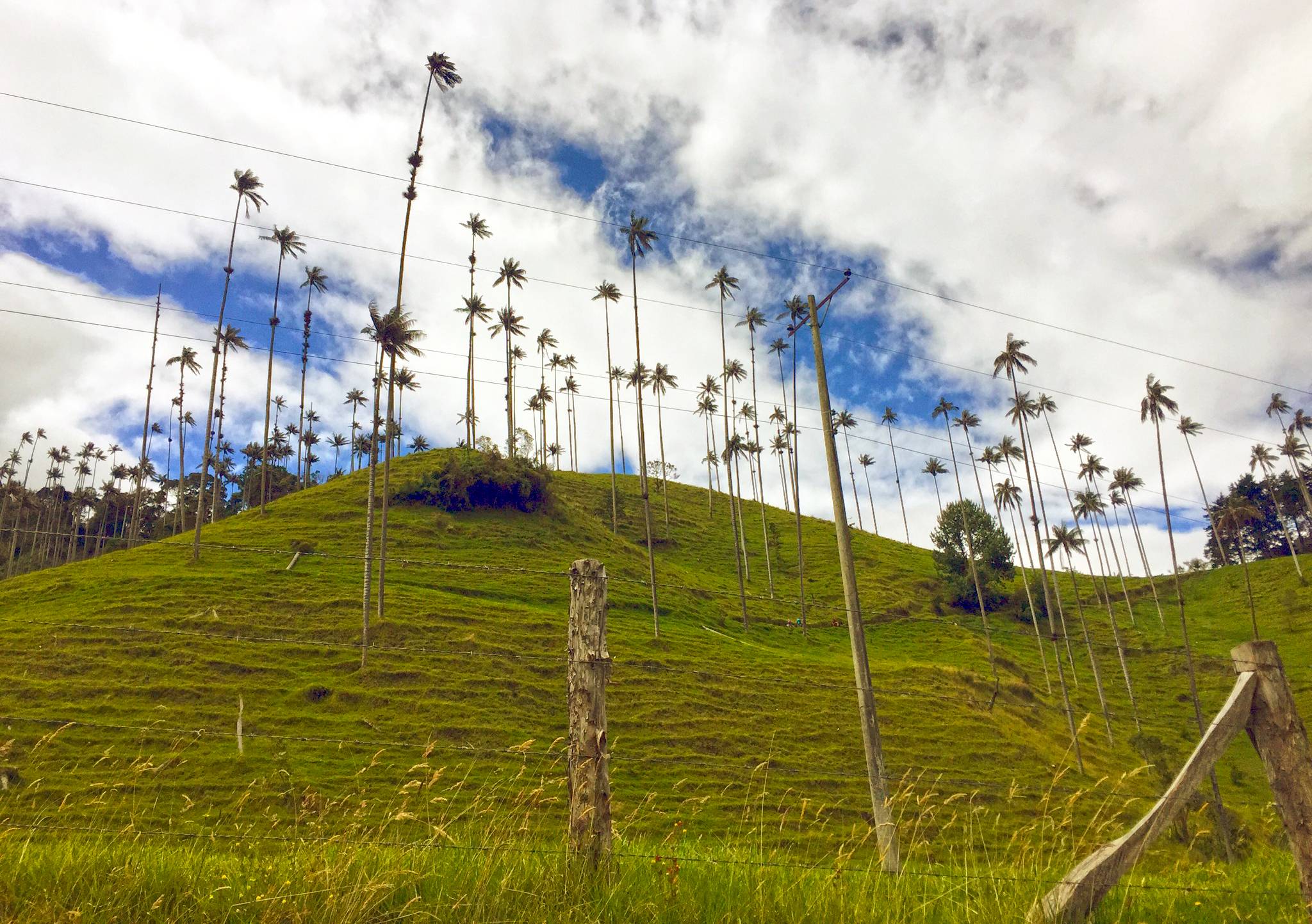 Update: This puzzle was closed, and I cannot fix it, since I cannot definitively confirm my intended answer.

My intended answer is:

The terracing was caused by livestock grazing on the steep hillsides.

The barbed wire fence in the photo's foreground hints at the probable presence of livestock. Separate photos (not shown, because it would give away the answer) also indicate the presence of livestock grazing on these hills. On flat ground, the livestock wander in random directions. On steep ground, the livestock prefer to follow the hill's contour lines, as that is the easiest path to walk, as opposed to more directly uphill or downhill. When a livestock initiates a contour path on a not-yet-terraced hillside, that path is repeatedly trod by subsequent livestock, as it is a little flatter and easier to walk than other contour paths, eventually leading to significant terracing.

The terracing is uneven because:

The livestock have to go up or down a bit to graze elsewhere on the hill.

I also considered the possibility that the terracing was caused by:

Slumping of the hillside's sod due to heavy rain. However, I ruled that out because that tends to require larger amounts of soil to build critical mass, leading to landslides.

Regarding some of the proposed answers:

"They are reverse progressive river banks from a river that has long since disappeared."

Flooding, to the point of causing banks, usually occurs in fairly flat areas, not around steep hills. Also, flood banks tend to be fairly level, whereas these terraces are uneven (not level) in places.

"If you mean the irregular steps of, say about 30 cm height, it is probably caused by rain run-off, and stabilised by vegetation. Similarly, the sand on a beach is washed into irregular ridges by the receding tide and waves."

Rain runoff tends to erode gullies going straight downhill, not following the counter lines. There are no tides or waves acting on these hillsides.

Update 2: I found the likely correct answer, after posting the question at EarthScience SE. The terraces are apparently

a terracette, formed from a combination of rain and gravity causing the soil to shift, and then exacerbated by trampling of livestock.

They are reverse progressive river banks from a river that has long since disappeared.

12
How do you rank these actors?
8
The FBI called… again
10
Cryptic Rebuses Continued
13
Cryptic Rebuses Visit the Art Museum
13
Who am I and how did I die?
7
The other night I did these things
12
These three people are connected, How so?
6
Where did she stay?
2
What links these numbers?