After touring the globe to accolades when performing his 10-card trick and 8-card trick, the magician noticed that the public's interest had waned, as had his own. Needing something to reinvigorate his act, he returned to an idea he pigeonholed long ago: the 7-card trick. Identifying four face-down cards from a group of seven would be something never before seen.

The trick works in the following way:

This a mathematical trick with no communication or collusion of any kind. The volunteer could place the cards randomly and the trick would still work. If the rest of humankind died while the magician was in isolation, he could still return and identify the values of the face-down cards (to somewhat muted applause).

This succinct description is blatantly stolen from @ais523's question and adapted for this one:

(Here's an equivalent formulation for the mathematicians and computer scientists out there: write a function whose input is a permutation of the list [1, 2, 3, 4, 5, 6, 7], and whose output is equal to the input except that four of the elements are replaced with "?", such that different inputs map to different outputs.)

There's one other restriction that the magician and assistant were working under: they wouldn't be able to take pages of notes with them when performing the trick, so whatever their strategies were, they would have to be simple enough to memorise; listing a separate strategy for each of the 5040 possible inputs isn't a reasonable answer here.

What are the instructions for the assistant and for the magician to perform this trick?

Here is a full implementation based on cycle structure.

A full explanation would be tedious. Instead here is a list of examples covering every single cycle structure. If you need more detail.please comment. 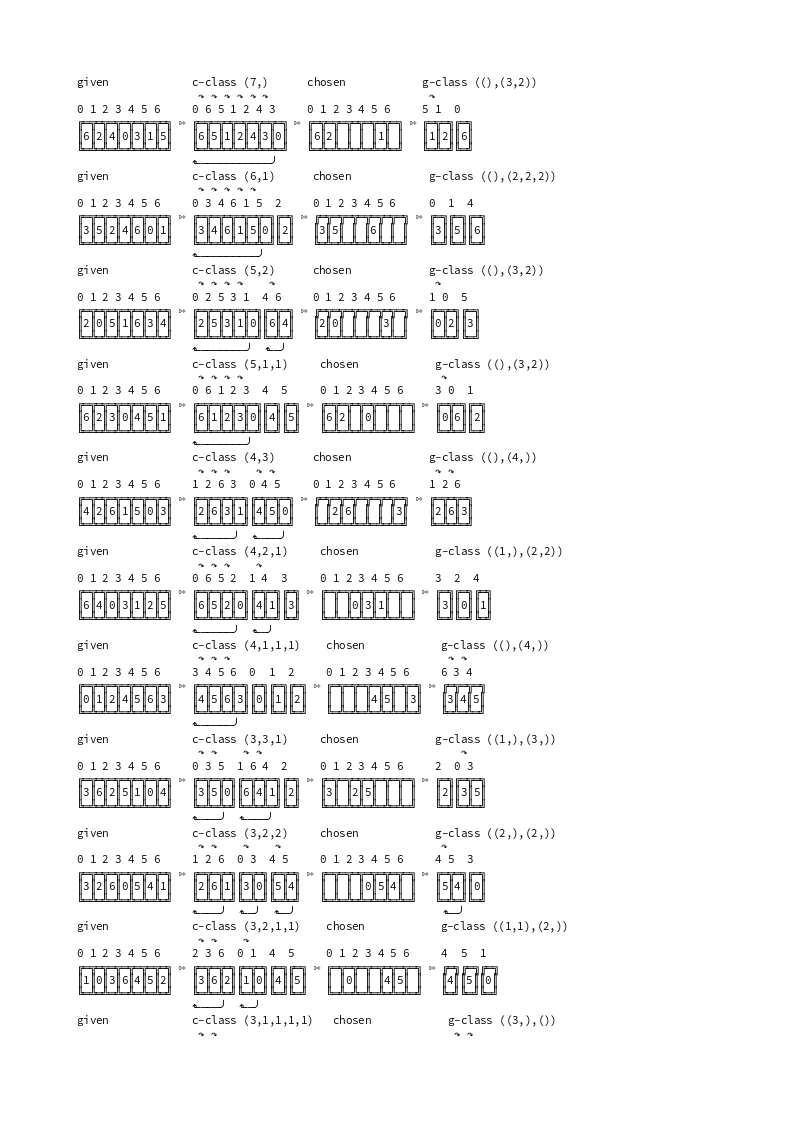 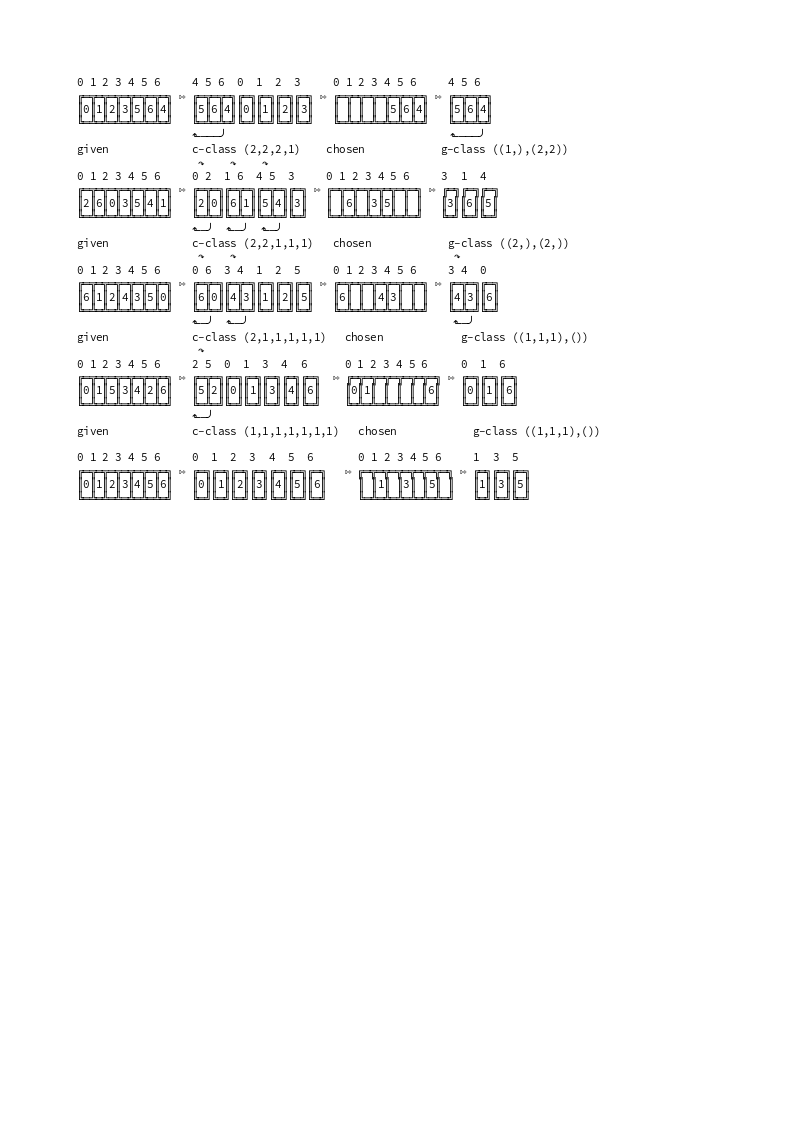 Our strategy for keeping the "code" manageable is to first break down "card-arrangement space" (all possible arrangements of the 7 cards not considering their face up/down state) and "codon space" (all possible configurations of three cards i.e. their positions and identities) into groups of "structurally equivalent" specimen.

To make things more concrete, let us as an example look at the mapping (6) to (o2,o2,o2) There are two ways of breaking up a given six cycle into 3 nonoverlappping cards. To make the association ivertible we use as reference the number after (mod 7) the out-of-cycle number in the cycle and compare the two numbers that sit two cycle-steps before and after it. If the left one is smaller (mod 7 after subtracting the reference number) we use the breakup that has the reference number as a position (example a), otherwise the one that has it as a card id (example b). 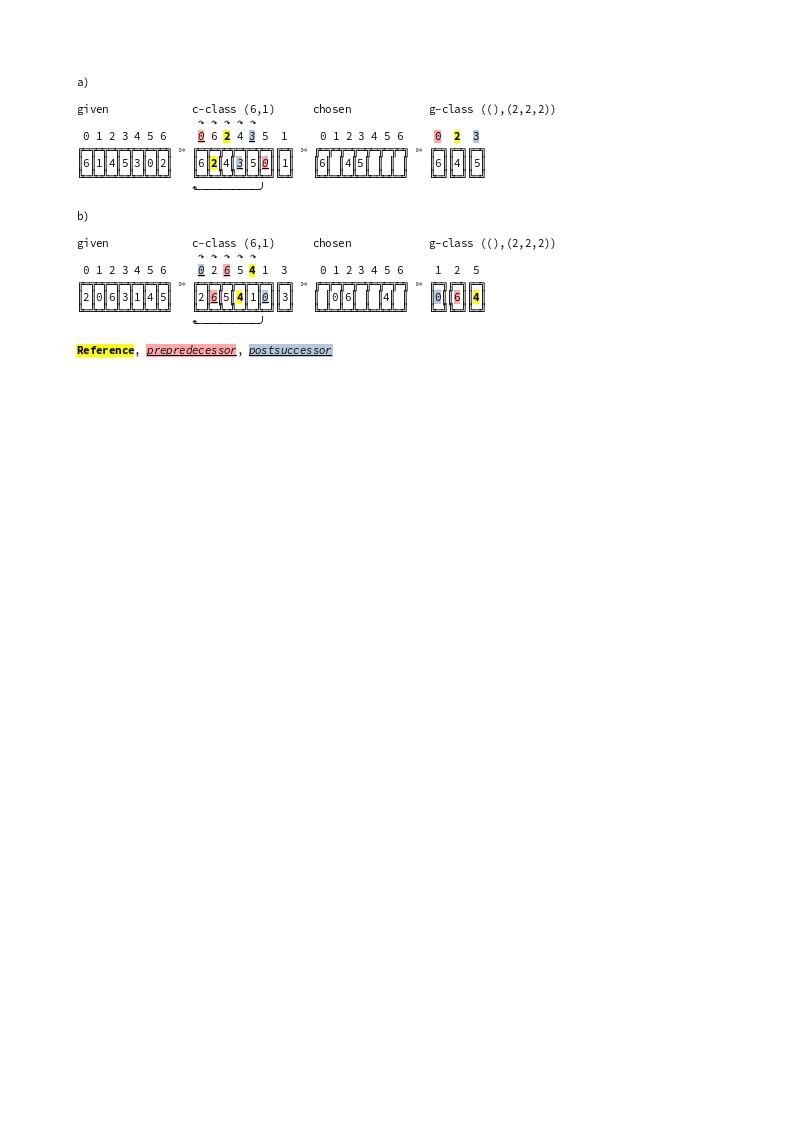 22
Is this 10-card magic trick possible?
21
Magician's hide and seek with 8 cards