Transferring 9 pegs on a 9x9 grid

You are given a 9x9 grid with a set of 9 pegs (red circles) arranged in a 3x3 pattern in the corner, as shown below: 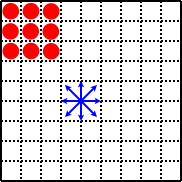 A peg can jump over another adjacent peg in any direction (horizontal, vertical or diagonal as shown in blue), provided that the destination cell is empty. A move consists of taking one peg and making one or more consecutive jumps, as shown below:

Can you transfer all the 9 pegs to the opposite corner of the grid, arranged in the same 3x3 pattern?

Bonus question: what is the smallest number of moves you can do it in?

I was having a slow work day, so I fired up Blender and made this:

Assume the pegs are in the upper left corner of a slightly enlarged chess board, which has indices $1 - 9$ and A - I. Now make the moves

If I'm counting right, the wonderfully animated solution of @squeamish ossifrage has $12 \times 3 = 36$ moves, which is the same number of moves as my solution above. Inspired by the animated solution, I found that I can move the $9$ peg block two places down and to the right with just $9$ moves:

Made a computer program to look for a solution with fewer moves. It managed to improve my previous solution so it now only takes

I had to make some assumptions to get a solution within a reasonable time, so I'm not absolutely sure this is the minimum. I'd love to see the minimum if this is not it!

It is a symmetrical solution so only the first 8 moves are shown. The remaining moves are simply a repeat of the first 8 moves in reverse order (palindromic). This elegant solution was found by H.Ajisawa and T.Maruyama, and it was proven to be optimal by George I. Bell in 2009: https://arxiv.org/pdf/0803.1245.pdf (page 13). NOTE that this solution doesn't answer the original puzzle as we have allowed a move into the neighboring cell in step 3. The optimal solution to the original puzzle remains an open question, but we know it cannot be done in less than 16 moves.

11
Professor Halfbrain and the 9x9 chessboard (Part 1)
8
Reassembling the Marquetry II: The Coffee Table Strikes Back
14
4x4 Sliding Puzzle with a twist
2
The very special matrix
7
Knights covering a 9x9 chess board
41
Controlling a robot blindfolded on a 9x9 grid
14
It cannot be done. I think
26
Creating the hardest 6x6 maze
15
Creating the hardest 10x10 maze