Cut a cake into 3 equal portions with only a knife

You have to determine a way to cut a circular cake into exactly three portions of equal size. The only marking on the cake is a candle in the very center.

All you have to work with is a knife that is at least as long as the diameter of the cake, and your hands. No other equipment is available.. 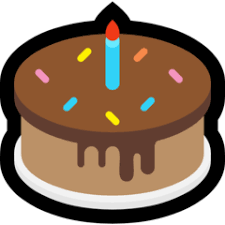 Though this puzzle requires some understanding of geometry, it is also a practical problem. Use the knife as a way of making measurements and referencing dimensions

Another way to do this

1. Let O be the location of the candle. Cut the cake in the direction from O to any point on its boundary (let's designate this point with A).
2. Measure the radius of the cake with a knife (by placing it inside the OA cut and marking the location of A by e.g. your fingers).
3. Build a chord of this length (the radius) from A to some point B on the boundary. Now AOB is equilateral triangle, so the angle AOB is 60 degrees.
4. Repeat the same operation from B (in the same direction) to get the new point C.
5. Cut from C to O. Since the AOC angle is 120 degrees, so the AOC sector of a cake is exactly 1/3 of it.
6. Repeat steps 3 and 4 to get the location of a new cut and get the other 1/3.
7. Repeat step 5 and cut the second 1/3.
8. The remaining part should be also 1/3. Profit.

Of course, it is not necessary to cut the cake in B, only to mark its location with the knife (in practice, it can be easily done), so this method can help to get exactly 3 slices.

An answer using the knife as a measure has already been given, but you can also use the cake itself:

I'm going to assume the cake cannot exist in two places at once, so we have to assume it has whipped cream or some other messy stuff on the sides (the candle suggests it's a birthday cake, so that should be a given), so that it leaves that annoying circle of creamy mess wherever it is placed down. (If you have two identical cakes, this is not necessary.)

Using the candle as a guide, mark two pairs of points opposite of each other. This way we can easily find the centre point of the whipped cream ring again after removing the cake: 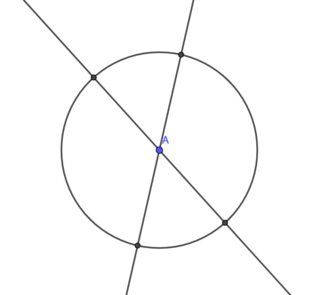 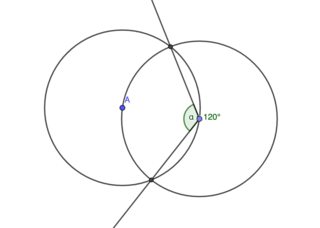 Now the creamy ring (or the other cake) will intersect the cake's perimeter at two points, exactly 120° apart from each other. Cut from these points to the candle to get the first slice, then rotate the (now pacman-shaped) cake in place so that one of the cut edges lines up with the other cut's mark, and cut along the same line as before.

Divide the cake into 6 pieces.

cut from the candle to an edge. Cut the cake completely in half. Using the knife, hold the point at the centre, and use the length from centre to edge to mark another edge of the cake. Cut from this point to the centre. Continue until you have 6 even slices.

Each person would get 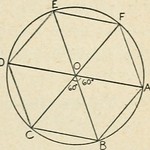 Consider a hexagon filling up the area of the cake. A hexagon is made up of 6 equilateral triangles.

So, each edge of the triangle would be the same as the radius of the cake (candle to edge).

Mark the knife to indicate the radius of the cake going from one point to the candle.

Now, make one cut from the candle to the edge. Then, use the marking on the knife to measure from that cut (on the edge) to the next point on the edge of the cake. Then, do this a second time since we want 3 slices instead of 6. Make the next slice there. Then, repeat for the last slice.

I have a different solution, not based on precise measurement but relying on people's love of cake!

First we must assume that each person wants to maximise their portion of cake.

Person 1 cuts first but takes the first slice. They are in no position to affect the distribution of slice sizes but will penalise 2 and 3 if they cut uneven slices. Person 2 could cut a very small slice, but they will be left with this slice as they choose last. Similarly, Person 3 cuts last and takes the second slice so they will also be penalised if they cut uneven slices.

You can do this without marking the knife, if you can use it to draw straight lines on the tabletop with icing. That's because

every ruler and straightedge construction can be done with a straightedge alone if you have a fixed circle with its center. That means you can inscribe an equilateral triangle.

It will take you a while.