This puzzle is based on Where is it? - The Google Earth Challenge series started by Conifers, :D

Note - this puzzle is mostly, if not all, about solving the riddle. I suppose the puzzle could exist without the image at all, and be perfectly solvalbe. If anything, the image should be used to confirm your solution to the riddle.

I suppose a hint is in order.

While the riddle has four lines, and they're all quite necessary, its solution only has three parts. Plus any hints I might have left lying around.

To find the meaning hidden in the text, you will need to resort to an idiom that means exactly that.

I'll add to the second hint.

The lines themselves are mostly red herrings. However, if you read between the lines... 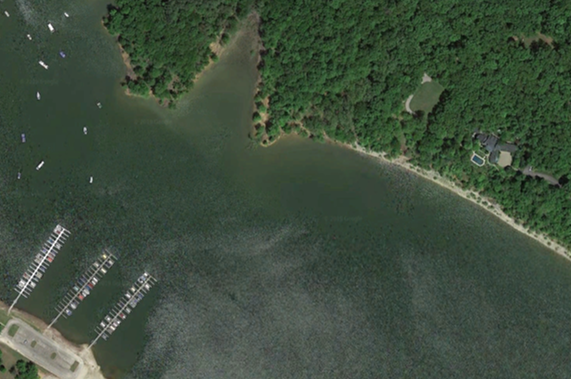 Still working on some of the clues, but I may have a lead on some.

Don't get sidetracked - this is probably Denver's first

I believe that this is referring to John Denver.

Don't get side tracked

I thought of train tracks and All Aboard! was John Denver's last album

This is probably Denver's first

More thoughts on this clue...

Could the clue be referring to not getting sidetracked by not overthinking it? is it as simple as Denver's first letter or syllable?

Another idea is that it could be John Denver's first name which is Henry. (@hdsdv confirmed that John is correct)

Using the logic that @Ahmed pointed out, we get Denver's first name by omitting the punctuation and just reading the clue straight through. Applying that same logic, it could be the cartoon bear that that loved honeydew. Possibly Yogi Bear because he ate human food.

Then the 3 words we have are John, Honeydew, and Sleeping. Pairing two of these (John and sleeping) with the title clue (cat) could be Garfield?

I think this is Winnie the Pooh or maybe Baloo from The Jungle Book...

I found a wiki page of fictional bears. Maybe this can lead to something.

Reading between the lines this could also be meaning that the cartoon bear is named John. Little John from Robin Hood is the only one I know of. And he slept in Sherwood Forest. Then the last line could mean something like "of course" = sure and "woods" = forest... Just putting my thoughts out there, but translating that to a place on google maps didn't yield any significant results. Sherwood forest contains no lakes and lake Sherwood in West Virginia wasn't quite a match to the picture.

Do you remember him, or at least where he likes to sleep?

Not much here other than if it's Winnie the Pooh, he lived in Pooh's Corner.

In the woods! Of course.

Just a shot in the dark, but could be something to do with golf. "Course" like a golf course and "woods" as in Tiger Woods (also brings up the title again with the big cat thing).

Just some small findings of mine:

Denver's first could also be

His first wife, Anne Martell of St. Peter, Minnesota. Which could refer to Minnesota.
Or his first top ten album, Rocky Mountain High.

I have most of an answer, but I'm stuck at a person rather than a place. I'm sure there is a final step I'm still missing.

My partial answer is:

John Cougar Mellencamp. The method to solve is to look at the word clues that "overlap" each line.

So the real clues are:

Don't get sidetracked - this is probably Denver's first. Name the cartoon bear that loved honey. Do you remember him, or at least where he likes to sleep? In the woods! Of course.

sleep in the woods = camp

Putting them all together:

John+melon+camp = John Mellencamp, who used to be known as John Cougar, then John Cougar Mellencamp. This fits the title clue about a big cat roaming through the middle. But I can't connect this to the pictured location ...