Nurikabe minicubes: the Headache, the Panache, the Apache

These are three-dimensional Nurikabe puzzles. In each case, the four squares represent the layers of a $4\times4\times4$ cube. The goal is to shade some cells in each layer so that the resulting space satisfies the rules1 of Nurikabe: 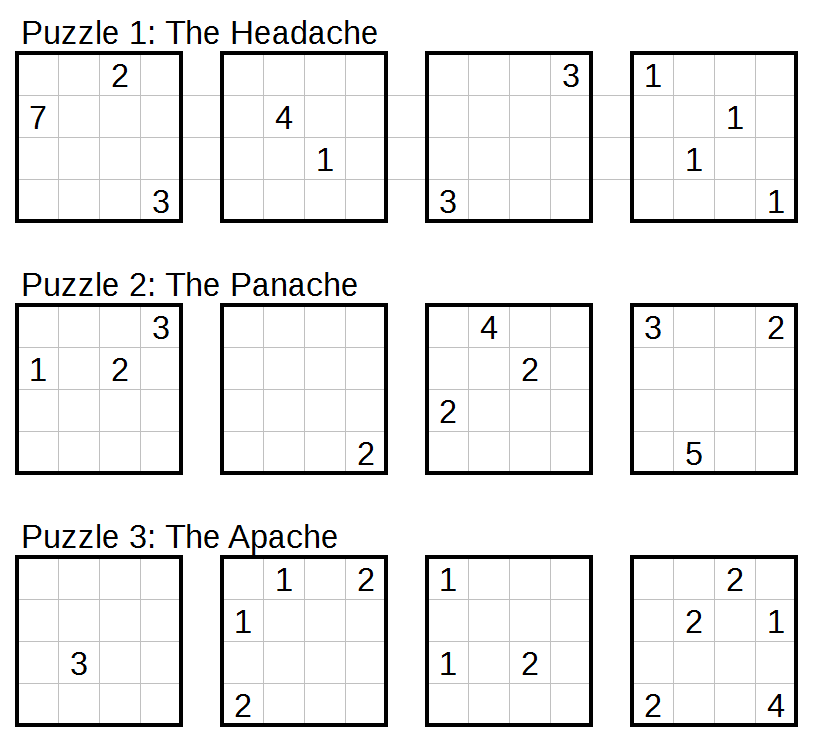 1 Paraphrased from the original rules on Nikoli

In all three explanations, I'll use "LxRyCz" to refer to layer X, row Y, column Z (all counted starting from 1, left-to-right or top-to-bottom). The directions will be "left/right/up/down" within a layer, and "back/forward" between layers -- the first layer is the "front", and the last layer is the "back".

The obvious place to start is with the size-1 regions:

Some empty cells were formed because they would make 2x2x1 cuboids.

Next, some empty cells can only be accessed by certain regions:

specifically, the two in layer 3. This forces some more empty cells:

and the rest resolves with the same techniques.

Start with the same techniques as before: finish the size-1 regions, and mark walls in any cells that would connect two regions.

Some regions now have only one way to extend:

the 2 and 3 in the front layer, the 4 in the third layer, and the 3 in the back layer. Each of those regions can be finished off.

Now we've incidentally finished a region by forced empty cells: block it off and mark any newly arising almost-2×2×1s.

Finally, there's one last deduction to finish the puzzle off:

Something has to reach the bottom-left of the front layer. The only region that can do that is the 5, meaning it has to go up through L(2-3)R4C2. That takes up four of its five cells:

and the remaining one has to be used to block a 2x2x1 in the back-bottom-right.

Once again, finish off the 1-regions and shade any cell that would connect two rooms.

Some regions have only one way to extend now: do that.

cell that can't be reached: the very front-top-left cell. Once that is taken care of, and the front 3 extends upwards into L1R2C2, there are a few more unreachable cells in layer 1, and one in layer 2 at L2R2C3.

The last cell in the previous step forms another almost-2×2×1. This completes a region:

and another unshaded cell is forced, in the top right of the first layer.

The rest of the puzzle resolves just by repeatedly completing regions and checking for new unshaded cells.

Not the answer you're looking for? Browse other questions tagged grid-deduction three-dimensional or ask your own question.