Room 213: Because of the Reindeer

This is part of a larger riddle room puzzle. Other rooms:

Once you enter the door labeled “3”, the door immediately shuts behind you. You are immediately in a room of darkness. The intercom picks up again: “Congratulations on getting into the next chamber, whether by chance or by skill. You have proceeded to the next challenge that awaits you!” The intercom shuts off quickly and the lights turn back on. After you are momentarily blinded, your vision clears and you find yourself somehow in the middle of a white room with some yellowish lighting.

You look ahead of you. You see 4 doors, like before, but they have different labels that last time. They are labeled Blitzen, Donner, Vixen, and Carol.

You see this room as a kind of war base, It’s not from any time period you recognize, or really any country. The insignia are odd. There are flags all around the room, with a strange insignia you do not recognize: a reindeer upon a sea of blue. 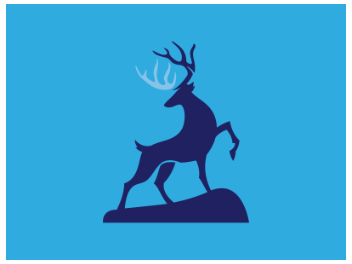 There are 4 tables around you, covered in what appear to be historical documents. Well, four of them. The first one has the buttons, as usual. But not only that: it also had a slip of paper on it:

“This room is themed about the lesser known book called Because of the Reindeer, a fictional book about revolutions on the North Pole, with the elves against the reindeer, four of which are listed above. Your job is to find the traitor.”

You look across to the closest table. The first thing that catches your eye is a diary-Rudolph’s diary, with primo mendacem on the cover. You flipped to the bookmarked page. There are only a few lines in it:

“Soon, my medic, Holly, came over to give me medicine. She told me that the traitor could be found in the lower case. I turned to look, but she whispered, ‘Not now! At two!’ as she indicated to a clock on the ‘table of secrets’.”

You look over. There is a dagger, a simple one. The plaque(with the Ofgelenkt Institute logo upon it), reads:

“This was the prized dagger of Rudolph during the North Pole Revolution. When it was forged by Vixen, Rudolph requested it to be as simple as possible. However, it was enchanted with heavy magic to make it the hardest blade possible. Nothing could shatter it, and it could cut almost everything. It was later passed down and eventually was used to kill Carol.”

You examine it closely. On the handle, there is an owl, as well as an inscription:

There are several war medallions on the table.

You walk over to a table in the back. It has a book of battle logs on it with some tattered pages. You read the pages it is spread out to: One of the pages is a fort, not unlike the famous Warwick Castle. It is set upon a hill of ice and stone, with snow flurrying around them. The other page has a description of the battle. There is a circled passage, which you read:

"The battle started today, at the time that was predicted. Our spy, did the job well. …Except we did not realize how many elves would attack us. There were thousands charging at our fort. It seemed quite hopeless, but we fought bravely and they soon retreated after twenty minutes. You would have to admit, Blitzen was the most valuable soldier on the field. We all knew magic, yes, but he had used a spell supposedly of his own creation. At least, we had no idea what it was-perhaps a forgotten Elvish charm. He kept pulling silvery stuff from his brain, and with a snap, it flew over to our enemies. Soon, they all retreated, though Blitzen chased after them to make sure they stayed away. He came back hours later, saying they would not attack until tomorrow afternoon. He was an excellent spy as well as a soldier.”

You see there is a ripped piece of paper used as a bookmark to keep the page. You take it out and examine it closely:

You know Dasher and Dancer and Prancer and Vixen,

Comet and Cupid and Donner and Blitzen,

But do you recall, the most Violent of all,

Was very violent when (he) rose.

All of those who had opposed.

Disgusted by the lyrics, and glad they were cut off, you turn to the other side:

You move onto a table with a candle glowing in a silver candlestick, embossed with a reindeer. Engraved in it are

On the table itself, there is a telegraph as well as several messages. The problem is, you can’t read many of them, as only one message is decoded, and only one other is not ciphered.

The clear one: “We found these transcripts in the opposing intelligence headquarters. However, only one has been decoded so far.”

You peer at the other messages. They read:

You sit and think for a while. You get up and examine the flags for a bit. All you see are different numbers and letters on each flag:

The one at the back:

The one over the doors:

You pace the room, thinking. And then it hits you. Which door should you go through?

If the numbers after the message are seen as ASCII characters we get "tHe KeY iS tHe tHiRD PRiMe COUntRY OF LASt". I don't immediately see any new clue in whether capitals are used or not.

Some fiddling with letter substitutions changes "Qrpqsia… Qdr irxq sp n psgkfr orvropnf" into "Testing... The next is a simple reversal".

To the Commander of Blood: Thank you for the test message. I assume that was what you shall use to decode. At any rate, we know that Vixen knows...and that given conditions, he would immediately report it to the other side. To send back, do the same thing as this time.

To Wolf Fencer 3: I can't say much here, there may be spies. But wait for another message; I'll expLIAn eveRything.

The messages on the flag at the back:

The message on the flag over the doors;

A possible clue from Rudolph's diary:

The capital letters give: "IDOTNINIETIIR". If one ignores the I's and the T's, we get "DONNER".

I suspect the big clue is the last undeciphered message, though I haven't cracked it yet:

It is wriiten in words of $5$ letters (except the last words) and $5$ is the third prime number. Probably a connection there.

The engraving on the candlestick:

If the engraving is reversed we get "unus postulo tantum vos", which according to Google Translate is Latin for "You only need one".

I did a letter frequency analysis of the message and the frequency fits well with normal English. This suggests that the letters themselves are not ciphered, just their order is rearranged.

Is anyone else working on this?